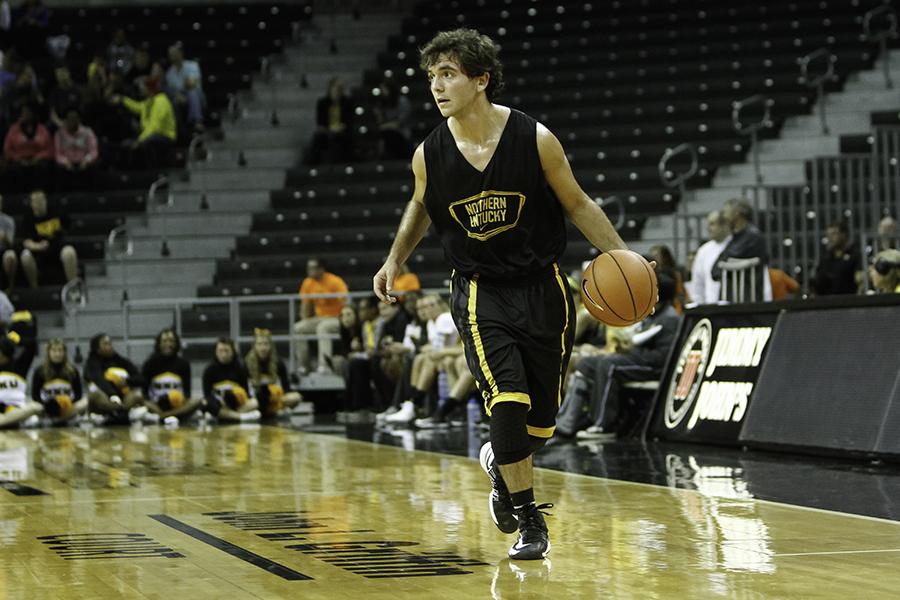 NKU men’s basketball freshman point guard Dean Danos wears jersey number 44. The same as “Pistol” Pete Maravich, one of his favorite players﹣even though Maravich passed away at the age of 40 in 1988 before Danos was even born.

“I didn’t know he [Danos] was old enough to even know who he was,” said Dave Bezold, men’s basketball head coach.

Danos said he tried wearing number 44 his junior year in high school. The team had the number arranged European style with the big numbers as guards and the little numbers for the forwards. Danos picked Maravich’s number and had a great year.

“I used to just watch all Pete Maravich’s passing drills,” Danos said. “I used to watch all his videos, even on VCR back then. Any time I had a chance. Him, Steve Nash, John Stockton, Jason Otter; all those guys are the hardest workers. I try to be like that.”

According to Danos, when he was younger he would dribble for two hours a day under his deck. This exercise in handling the ball was something he heard Maravich would practice as well.

“I heard he would just be in the gym for eight, nine hours at a time passing the ball off the wall for like four or five hours. Basically outworking everyone,” Danos said.

Danos added that his family has always been a basketball family. His dad and uncle always admired Maravich’s work ethic. Maravich played at Louisiana State University for three years with his father as the coach in the late sixties. Danos said he heard Maravich’s dad was tough on him, but he put up big numbers during his time at LSU.

Maravich still holds many NCAA records. He holds the record for most career points with 3,667 points and the highest career scoring average of 44.2 points per game. These accomplishments were also achieved before the three point line was started. He went on to play in the NBA for the Atlanta Hawks, New Orleans/Utah Jazz, and Boston Celtics until he retired from injuries in 1980.

Bezold said that it’s neat for Danos to be looking back further into history for players to emulate, whereas Bezold grew up wanting to be like Larry Bird or Michael Jordan.

“I wish he was as tall as Pete Maravich, but he’s not,” Bezold said. “He does have a little bit about him just with the really good vision and the way he passes the ball. And his hair is pretty close to being similar.”

Kevin Shappell, men’s basketball assistant coach, added that in addition to both Danos and Maravich being point guards, they are both highly skilled and smart players.

Ethan Faulkner, former player and student assistant coach, said that Danos has craftiness about his game that can make him hard to defend. He added however, every freshman coming into college basketball has a learning curve.

Danos said he hopes to become more comfortable and natural and make plays like Maravich as the season continues. He also hopes to try to read the game and make it easier for his team mates.

“I feel that just being a leader doing the little things, you know knocking down shots, playing great defense, making my guys around me use their talents to help us win games,” Danos said. “My job is to bring the best out of everybody else.”