Women’s team not only aspires to be in tournament, but to win 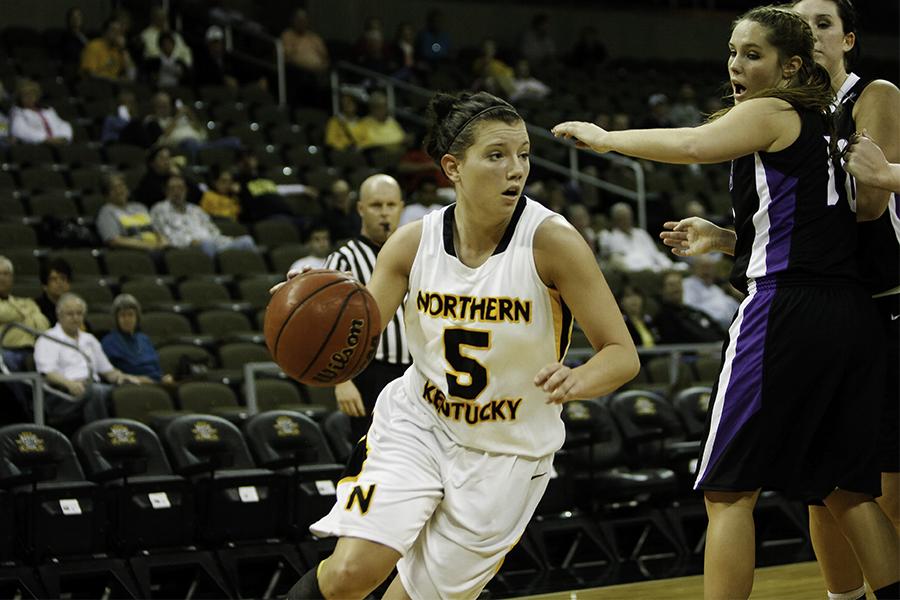 After losing 72-70 against the College of Charleston in the first round of the Women’s Basketball Invitational last spring, the NKU Norse women hope to make their second appearance in the tournament this season.

Dawn Plitzuweit, women’s basketball head coach, said the team has changed because of the new players that have been added to the team roster.

“Changing our style of play has caused us to approach things differently this year,” she said.

This season the women’s basketball team has added five freshmen to their roster.

“It is very obvious we are going to be a young team this year, so our energy and readiness has to be at an all-time high,” said forward Melody Doss, a junior marketing major. “We need to have the sense of urgency and aggressiveness. I believe that the freshmen have the ability to give us that energy.”

“I think they will provide us with more depth this year and give great energy,” said guard Thacker.

Thacker has a piece of advice for the players that are new to the team. She said Plitzuweit thinks that it’s better to play aggressively and make a mistake than to not try at all.

Rianna Gayheart, sophomore guard and communications and organizational leadership major, also has some advice about getting through tough moments during the season.

“Everyone goes through a part of the season where they are in a slump and it’s hard,”  Gayheart said. “Don’t look down on yourself.”

Doss also gives advice to the new players about enjoying their time on the team.

“Enjoy every second of it because it goes by so fast,” Doss said.

Kaitlyn Gerrety, junior center and biology major, gives advice for the incoming freshmen based on a quote that she heard when she first started in the program.

“Freshmen year is the hardest year. There is so much to adjust to and you never know if what you’re doing is the right thing, or if you’re in the right spot or what’s going to happen next,” Gerrety said. “If you work hard and make it through, your next three years will be so rewarding.”

Even though some of these women have experience being in the program, there are still aspects of their game that they need to work on.

“Last season, I struggled with scoring and guarding perimeter players,” Gerrety said. “By working hard and keeping my confidence level up, I hope to be better in both of these aspects this upcoming season.”

There are two main aspects of the game that the women’s basketball program concentrates on: toughness and togetherness.

“The toughness piece for us is finishing plays; whether it’s rebounding, getting on the floor or taking charges,” Plitzuweit said.

With the toughness aspect of the game, Plitzuweit talks about finding a way to complete a play.

“We’ll give you different ideas about how to get things done, but ultimately, there are some things in a game that you have to do in an unconventional fashion,” she said.

Another aspect of the game that’s important in the women’s basketball program is togetherness. This has to do with the camaraderie, chemistry, the team’s ability to share the ball, understanding what’s a good shot and what’s a better shot.

Plitzuweit thinks that during the season, every team they play is their toughest opponent.

The team opens up its season at The Bank of Kentucky Center against the University of Cincinnati on Nov. 9.

“Right now, that’s where all our time and attention is really focused,” Plitzuweit said.

Thacker, being the only senior on the team, feels like she has something to prove.

“I need to continue working on being the best leader I can be and make every moment count,” Thacker said. “I won’t have another year to ‘try again.’ I just want to leave it all out on the court.”

Additionally, Gayheart feels that she is more experienced with the NKU basketball program and she knows what is expected of her.

“Last year I was figuring everything out. I was nervous,” she said. “This year I really know my role on the team and I’m coming in as a leader.”

As for Gerrety, she is transitioning from more of a following role sophomore year to being a leader for her junior year.

“I really feel much more comfortable taking on a leadership role as a junior,” Gerrety said. “I hope that myself and the other upperclassmen can lead the underclassmen and the team in a positive direction.”

This year, Doss said it isn’t just about making it to the tournament.

“It is about winning the whole thing because I know we are capable of achieving that goal,” Doss said.