Chad Jackson to redshirt this season 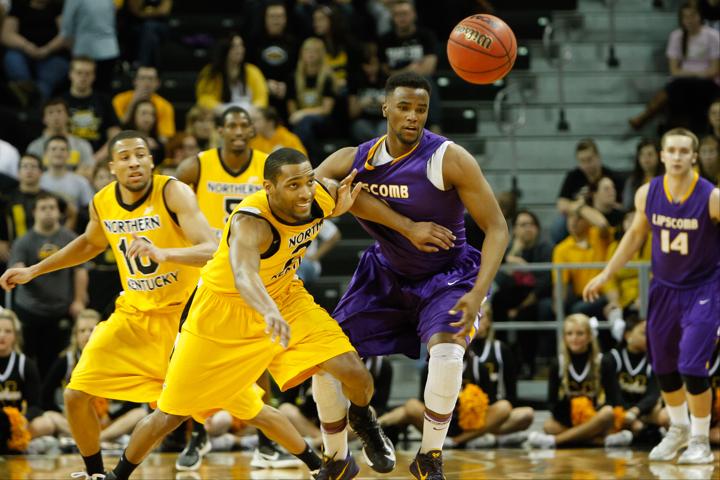 Norse senior guard Chad Jackson will redshirt this season so that he will have a chance to possibly play in the NCAA tournament next season.

Norse senior guard Chad Jackson will redshirt this season, with hopes of making his dream of playing in the NCAA tournament a reality.

Since reclassifying to Division I, NKU athletic teams have to wait four years before they are able to participate in the actual NCAA tournament. This rule could soon be reduced to two-years, according to men’s basketball head coach Dave Bezold.

Jackson said he started contemplating this decision after last season ended. Jackson and Bezold discussed how the rule restriction could be lessened to two years.

“I was just thinking about it and knowing that we graduated three seniors and us being so young, I kind of just thought about the next year,” Jackson said. “I figured I could just redshirt and just work on my game, and hopefully come back next year and be able to make the NCAA tournament.”

Jackson, who is from Lexington, Ky., played his first Division I season at James Madison University before transferring to NKU. He said that team wasn’t fortunate enough to make the tournament, so he is hoping to reach this goal in his last season as a Norse.

Bezold said he thinks redshirting Jackson is a great move for the program in the long-run, and that the change to two years was something that was mentioned last year at conference meetings.

“We didn’t lose him; we redshirted him,” Bezold said. “Every day in practice, he helps us get better.”

He said the previous interim athletic director, Mike Cusack, talked about it in the middle of summer and thought it was gaining steam.

Bezold said the team would like to have him out there because he’s been through three years of college and understands the grind of it.

“We have kids that haven’t mentally had to go through a full season yet, and be responsible for success on the basketball floor,” he said.

Although, Bezold said he doesn’t think having Jackson on the floor this season would significantly help the team that much more in the big picture, even though at certain times it could. He said it would have a bigger impact if there were at least two to three upperclassmen that sat out for the season.

Bezold said if he had five seniors, and there was a one percent chance that the change would happen, he’d redshirt every one of them, because what the NCAA has done to these kids is unfair.

“The NCAA experience for all student athletes isn’t the same,” Bezold said. “I would redshirt every one of them, even if we lost every game this year. I would still do it because it would only be fair to them.”

Sophomore guard Todd Johnson said not having Jackson this year is obviously, a tough loss for the team, but they’ve been practicing and learning how to play without him.

He said that junior guard Jordan Jackson, a transfer player from Williston State College, plays similar to Chad, so it is a good fill-in.

“He needs to work on shooting the ball a little bit better, but as far as distributing the ball to people, driving and taking it to the hole, he’s great for us,” Johnson said. “He’s just like [having] another Chad Jackson.”

Chad is still allowed to practice with the team.

“I’m just challenging these guys, day-in and day-out, and just helping them grow up and mature,” Jackson said. “Being the only senior on this team, I’ve been through a lot. I can relate to these guys and if they have any questions, they can come to me if their not very comfortable talking to a coach.”