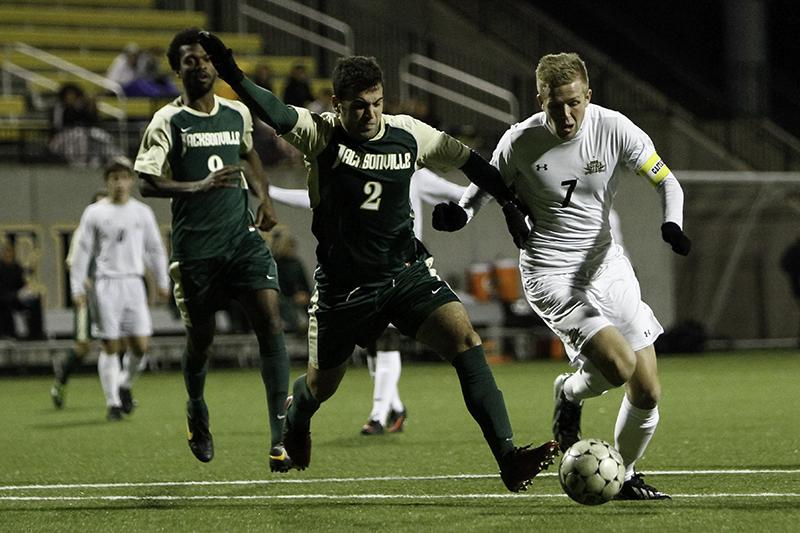 Before the game, the seniors were honored by the NKU athletic department for their service to the team, and the university. In honor of the seniors, the national anthems of Great Britain, Canada and the United States were played.

The first goal was scored by the Norse in the ninth minute of the game when Mohammad Salhieh kicked the ball over the head of Jacksonville goalkeeper Gavin Carlin.

The Norse took a 1-0 lead into the locker room at halftime.

After the half, close to an hour mark, senior midfielder Brendan Murphy scored a goal, the second of the night for the Norse. That goal took the score to 2-0 in favor of NKU.

There was “a lot of emotion” in that shot, said Murphy. “We overplayed it a little, but just took it over the top and got it in.”

Jacksonville scored a late goal in the seventy-fifth minute, a long shot by Griffin Kelly.

“We knew what we were up against in Jacksonville,” said Murphy. “They’re a good team. We didn’t play our best but we found a way to win.”

NKU Head Coach John Basalyga was pleased with the way his team performed in the beginning of the match against Jacksonville.

“I think we did a lot of nice things in the beginning,” said Basalyga. “But it got a little dysfunctional at the end.”

Basalyga said this was the “third or fourth” time this season the Norse have given up a goal when up by two goals.

The Norse have three games left in the season and travel to University of North Carolina-Asheville on Wednesday before they return for their home finale next Saturday against Mercer at the NKU Soccer Stadium.