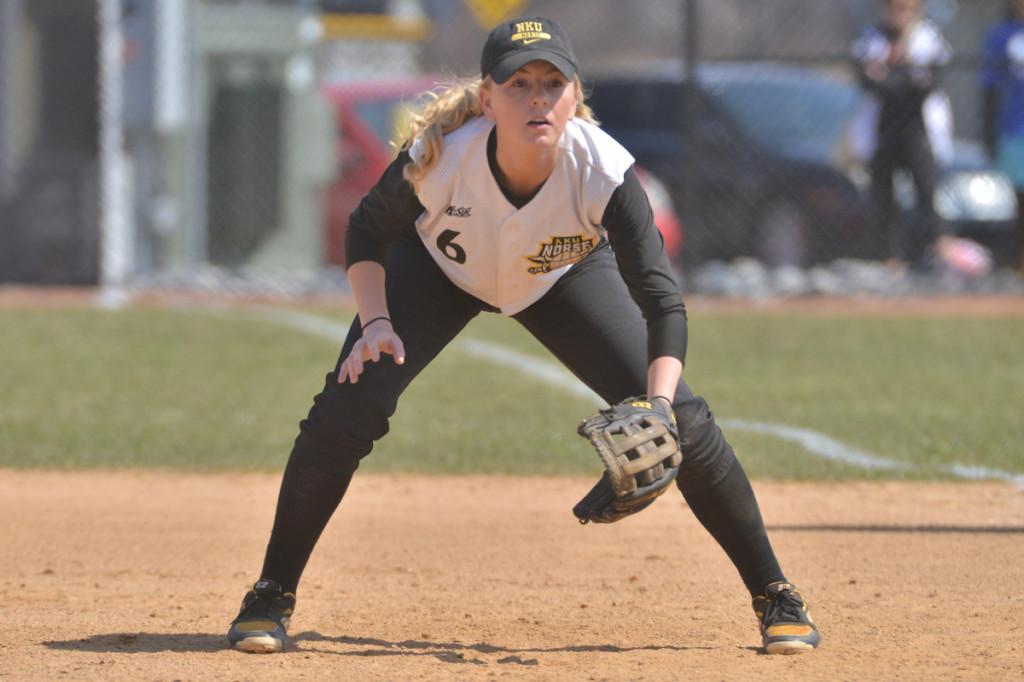 Sophomore infielder Nicolette Hayes goes to catch a ground ball last year in her first season as a Division 1 athlete.

Nicolette Hayes stepped up to the plate in a softball game against Urbana at Miami University. At the top of the inning, there were two outs and the Norse were down 3-0. There were two players on second and third base when Hayes hit a single up the middle that scored two runs, bringing the score to 3-2.

And that’s the last thing she remembers about the game before her season-ending injury.

As Hayes went for a fly ball behind second base, later on in the game, the centerfielder also went for ball and the two collided.

Hayes passed out as a result of the collision.

“I got up kind of mad that I got hit,” Hayes said. “Everytime I start doing well I get injured. I walked off the field by myself. I remember being helped up the stairs and the next thing I remember I was getting put on a stretcher.”

Hayes was rushed to a hospital a few blocks from Miami University. She originally got a CT scan for a head injury. However, after complaining of not being able to breathe and receiving a CT scan on her abdomen, the doctors found major internal bleeding, according to Hayes.

She was then given a blood transfusion on site and air carried to Miami Valley Hospital in Dayton, where she received a surgery that “coiled off” the veins that led to where her spleen was lacerated.

“After that, they thought I was fine, that everything was good,” Hayes said. “I was there for five days and they sent me home. I wasn’t really ready to, but they sent me anyways. 12 hours later, I was admitted to St. Elizabeth Hospital in Fort Thomas because I was bleeding internally again.”

At St. Elizabeth, Hayes wasn’t given additional surgery, but she was kept in the ICU until she became less nauseous. She spent around five days in the hospital and was discharged the day after her 20th birthday.

“It’s a very serious injury,” Kathy Stewart, head softball coach, said. “Many years ago, people generally died because of the internal bleeding. But she’s an athlete, she doesn’t want to sit out. She wants to come back now.”

After her first checkup, Hayes was under the impression she was not going to be able to play for several weeks. However, it’s now a lot worse than she originally expected and she will be sitting out four to six months and will have to be medically redshirted for the season, according to Hayes.

“When I got to her on the field she was unconscious,” Allie Conner, junior athletic training major and softball catcher, said. “I didn’t see her as just a teammate. I saw her as someone who was really hurt and declining rapidly.”

Hayes said that she will be at every home game because softball is a clear passion for her, even though she can’t play.

“It is probably the worst feeling in the world,” Hayes said. “I feel absolutely worthless. I hate it. I’m not used to not doing stuff and now I can’t do anything. I can’t do everyday things; I walk to class and I’m out of breath. Everyday normal stuff you wouldn’t think is a big deal is so hard.”