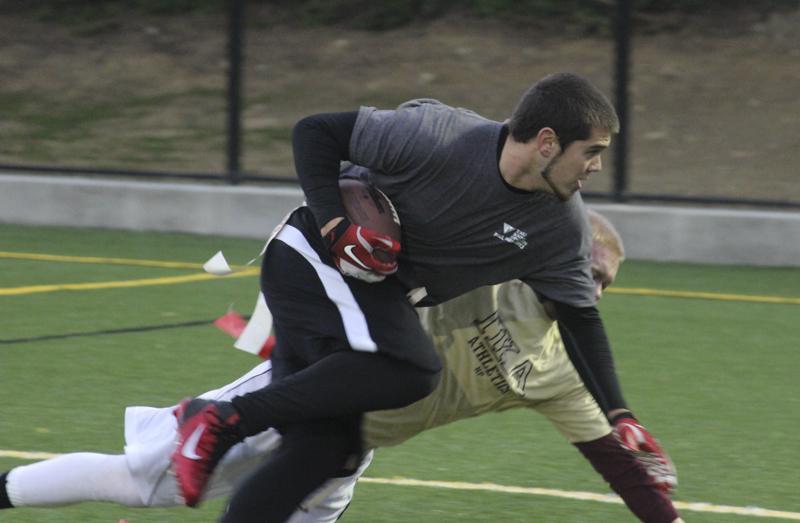 Students and faculty gathered together for the grand opening of the intramural field complex.

Over 300 students flocked to the opening kickoff event for the new intramural field complex behind the University Suites on Oct. 24, despite the chilly and rainy weather.

According to the Director of Campus Recreation Matt Hackett, the $2.4 million complex’s construction was hindered last winter and this summer due to bad weather.

Hackett said this made the poor weather ironic.

However, this didn’t stop students from coming out to watch the first of 10 flag football games between the Pi Kappa Alpha and Tau Kappa Epsilon fraternities and the Delta Zeta and Delta Gamma sororities. Students also passed footballs and frisbees around in the background and kicked soccer balls into unused goals.

“The initiative of you, the students, is what made this all possible,” said President Geoffrey Mearns. Mearns referenced the student recreation fee that was initiated in the Spring of 2011 to help raise funds for both the new intramural fields and the renovations to the Campus Recreation Center.

Juniors Dan King, math major, and Jonathan Miller, business informatics major, threw around a frisbee instead of watching the football games. King called the facility “nice,” because of the lights and the new turf, as opposed to the old grass fields they used to throw the frisbee on.

“We won’t have any more broken ankles from the holes in the grass,” Miller said.

King said students would just tear up the previous grass fields because of the weather.
“It’s nice that we can come out and play whenever,” King said.