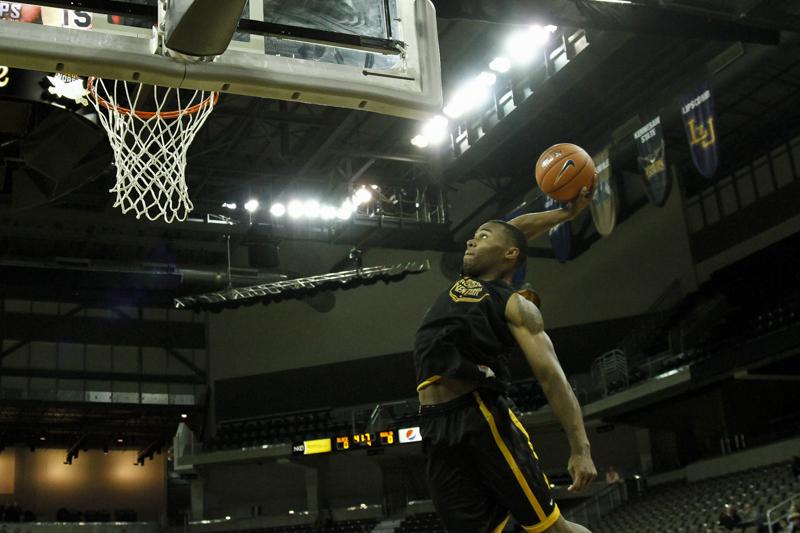 Northern Kentucky University Athletics hosted Black and Gold Madness on Thursday, October 17, 2013 in the Bank of Kentucky Center. They had dancing, cheering, games and prizes at the event.

The night started off with the men’s and women’s basketball team’s introduction where they came out doing dance routines, followed by the women’s scrimmage and then the men’s scrimmage.

Freshman recruit Daniel Camps displayed his athleticism by finishing the scrimmage with 13 points and a dunk.

Bezold was pulling for the Norse fans to ‘keep it up’ after last year’s attendance.

“We need to carry over the momentum from last year [the crowds.]” Bezold said. “Let’s keep it up for this year.”

Following that there was a three point contest, which was won by Anthony Monaco, sophomore.

The slam dunk contest was next with Chad Jackson (Sr.), Daniel Camps (Fr.), and Jordan Jackson (Jr.). The judges for the contest were Coach Plitzuweit, President Mearns, and mascot Victor E. Viking.

The women’s first home game will be against Cincinnati on Nov. 9 at 7 p.m. The men will take on San Diego at 7 p.m. for the team’s first home appearance of the season.

*Note: Coach Bezold said if NKU beats UK, UNC, Purdue, or qualifies for the NCAA tournament when eligible, he will jump in Lake Loch Norse.