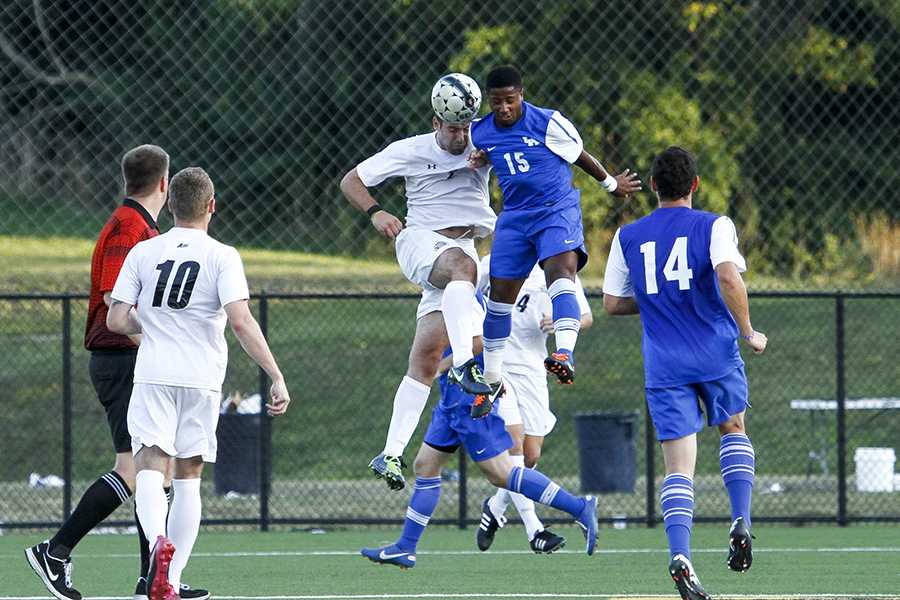 This season, NKU’s men’s and women’s soccer programs will be the marquee sport during the fall, and are looking to make an impact in the Atlantic Sun Conference and in Division I soccer as well. According to the coaching staffs, the teams are both looking to build upon their hard work and produce on-field success.

The men’s soccer team has played one game so far this season: an exhibition against the University of Kentucky on Aug. 25. The game ended in a 1-1 draw and the team believes it is a good start to what could be a strong season for the Norse.

“UK is very quick and athletic,” said men’s soccer Head Coach John Basalyga. “Because we are not as athletic as other teams, we try to outwork them, and I think doing that helped us stay in the game [against UK] and come out with a tie.” The team also played UK last season, and that game ended in a 2-2 tie.

This season, the men’s team has a slate of high-profile games against the likes of Dayton, Cincinnati, Marshall, Bowling Green, and Wright State.

“We have some very big games this season,” Basalyga said. “We are heading up to Dayton on Sept. 6, and it doesn’t get much bigger than that.”

In addition to non-conference games, the Norse will also face several marquee opponents in the Atlantic Sun this season. Florida Gulf Coast, Mercer and East Tennessee State will all be tough tests for the team this year, according to Basalyga.

“Those have been the premier teams in the conference for the past three or four   years,” Basalyga said.

Sophomore goalkeeper A.J. Fleak thinks the team can make some noise this season.

“We just need to come out of the gate quicker this year,” he said. “Last year we started 0-6, and that just killed us. If we can play like we did [against UK], I think we will be good.”

The men’s soccer program has also been adjusting to NKU’s recent move to Division I. But coach Basalyga still believes the process is the same.

“It’s still about finding quality athletes and adjusting to playing against a whole new level of competition,” Basalyga said. “It’s not easy, but we’ll get through it.”
Junior defenseman Ian O’Reilly also believes the move to Division I can bring great things.

“The competition is obviously going to be better, and I think that going to push all of us on the team to work harder,” O’Reilly said. “Every week there’s a different starting 11, and we are all pushing ourselves to get better because no one has a guaranteed spot.”

Meanwhile, NKU’s women’s soccer team is looking to bounce back from a 6-11 record last season and aim for success at the Division I level. Women’s Soccer Head Coach Bob Sheehan believes that a successful season can be achieved even if the record doesn’t turn heads.

“Our goal is not based on the number of wins that constitutes a successful season but just trying to get better every day and playing at the highest level we can play at,” Sheehan said.

Sheehan also emphasizes the importance of teamwork and good sportsmanship.

“I think the future is bright for our team,” he said. “We strongly believe that if you do things the right way, good things will come. We want our players to conduct themselves with integrity and class both on the field and off the field as well.”

The women’s team is looking for two senior forwards to help lead the team this season.

“We are looking for Megan and Allison to step up this year,” Sheehan said. “Megan was named 2nd-team All-Conference last year and Allison has great pace and acceleration. They have been exceptional leaders and have invested heavily in the program as we have moved from Division II to Division I.”

So far this season, the women’s soccer team is 0 wins, 1 lose and 1 draw with upcoming games against Morehead State on Sept. 6 and Xavier on Sept 20. There will also be games against Florida Gulf Coast, Mercer, Jacksonville and Kennesaw within the A-Sun.

“Florida Gulf Coast will be a tough team, as they have won the conference for the past 3 years,” Sheehan said. “They were the best team we played against in the Atlantic Sun last season.”