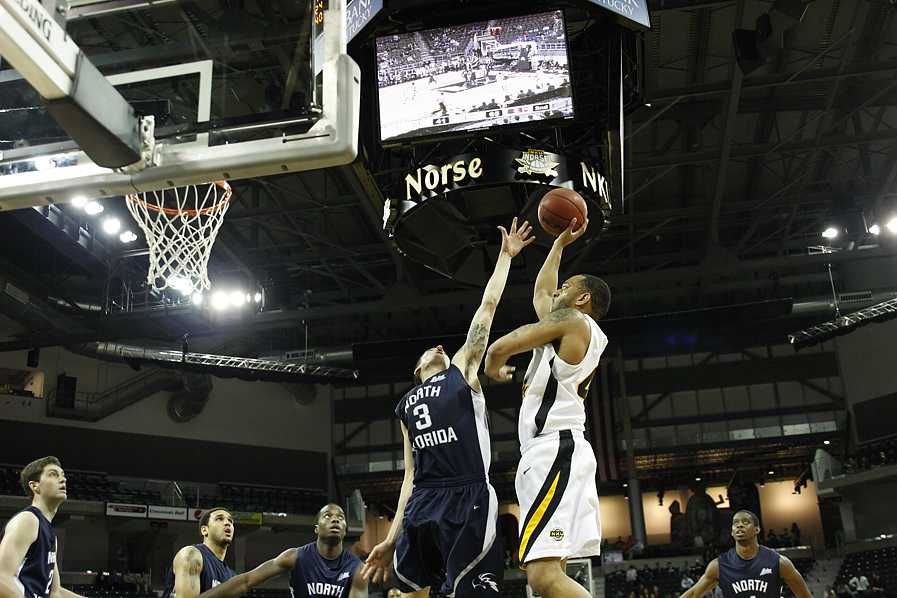 The man who hit the game-winning 3-pointer against West Virginia last season, NKU senior Eshaunte Jones, led the Norse to a 72-45 victory over North Florida and reached 1,000 career points. He scored a career-high 30 points, shooting 6-9 from behind the arc.

Jones said he heard a while ago that he was in range of accomplishing the 1,000 career points, but his priorities were elsewhere.

“As long as we win this game, that is all I really care about,” he said. “Getting out of here with a win is all that really matters.”

The Ospreys recorded 14 turnovers, compared to only three by the Norse.

“I know Eshaunte had a tremendous night offensively, but if he doesn’t, I still think we are going to win this game because, defensively, we were locked in,” head coach Dave Bezold said.

NKU has the opportunity to finish its first Division I season with a (9-9) A-Sun conference record if it wins on Saturday; after starting the regular season off (0-6). The Norse was picked to finish last in the conference in the A-Sun coaches and media polls.

The team had a hard time scheduling games during its first year in Division I because of the transition. Bezold said next year’s schedule was completed in around 48 hours because other teams noticed NKU starting the season off so badly. But he said the players never lost hope.

“When you start out 0-6, I can’t tell you how many schools called us to play us next year,” Bezold said. “They never stopped believing in each other. They never stopped questioning what we were trying to get out of them.”

The Norse host Jacksonville for the last home game of the season and senior night Saturday March 2, at 5:30 p.m. in a doubleheader at the BOKC.