School spirit takes off around campus as the Norse grow 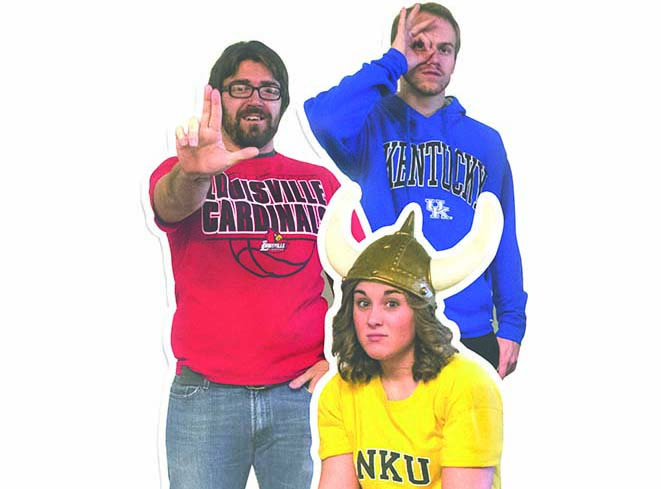 School spirit at Northern Kentucky University is important to students. It seems that everywhere on campus, someone is wearing athletic gear. The University of Kentucky, University of Cincinnati, University of Louisville, Ohio State University and many other schools are all heavily represented.
The missing piece seems to be NKU.

There is plenty of school spirit at NKU. It just doesn’t seem to be heavily in favor of NKU. From hometowns to rooting interests, the reasoning for the representation of other schools seems to differ based on the individual.

Jamison Wright, a freshman, was spotted wearing a University of Michigan sweatshirt on campus. His reason for sporting the sweatshirt was simply about having family in Michigan. He believes students should be free to wear any school gear that they desire, regardless of the reasoning.

“They can do whatever they want to,” Wright said. “They are not committed to just liking this university. They’re from other places and different high schools, so they have different preferences.”
However, he also believes that the move to Division I will help school spirit at NKU.

“They’ll want to support it, and say, ‘Oh, I was one of the ones to first start wearing NKU stuff,’” Wright said.
Freshman April Warman, wearing an Ohio State sweatshirt on campus, disagrees that the amount of NKU gear seen on campus would change based on the move. To her, it simply comes down to being a fan of a school other than NKU.

“I think people are already fans of other schools,” she said. “Even if they do still like NKU, they might have apparel for both schools, like UK.”

Norse Force president Sara Daugherty said she hopes the move to Division I will spark change in the outlook of students on campus, and shares Wright’s view that school spirit will be aided by the move.
Daugherty said that she has already seen a difference, though she notes that increasing school spirit is an ongoing process.

“I think since the announcement of Division I, I’ve seen a lot more (NKU) shirts around campus,” Daugherty said. “We’re just coming up, we’re just becoming known, so it’s going to take time.”
Daugherty also realizes that the representation of other schools on NKU’s campus will never completely go away, regardless of how well NKU performs at the Division I level.
“We have a lot of competition,” she explained. “People have been raised since they were in diapers to love UK or to love Louisville.”

However, Daugherty is not simply sitting around and hoping that students develop school spirit. She is taking an active role in helping the transition along through her position in Norse Force.
“There are a lot of other schools that are represented on this campus, and I’m really passionate about making NKU the number one school for people,” Daugherty said, explaining the role Norse Force has in getting students involved. “We’re going to do some kind of clothing drive where we’ll have students bring in T-shirts of other schools… and exchange them for an NKU shirt.”
The idea, she explained, is to provide students with an NKU shirt, showing them that school spirit can truly take off if everyone buys in.

Just as the athletic teams are certainly motivated by the new level of competition, Daugherty is as well. She hopes that events like the clothing drive can show students that they are part of the competition as well.

“We’re Division I now,” Daugherty said. “We’re competing with other schools, especially the ones in our conference. I want to put our name out there.”