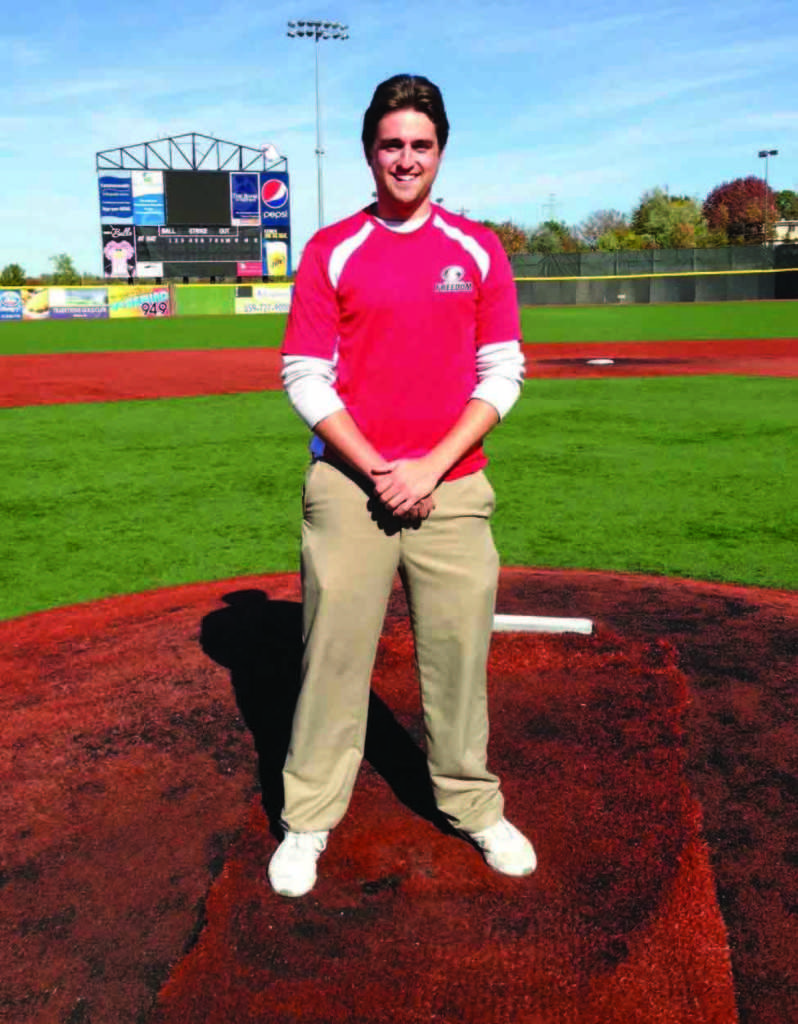 A sports business major at Northern Kentucky University needs a few things to graduate and become successful in his or her career: a ready-to-go attitude, on the feet thinking, a great sales pitch and leadership. Interning somewhere related to sports is required for anyone who goes through the sports business program at NKU and wants to leave with a degree in hand.

One student in particular, Drew Pifer, a senior at NKU, holds all of the qualities that a student may need to be successful in the real world once graduating with a sports business degree.
Not only that, but he had an internship with the Florence Freedom, home of the minor league baseball team in Northern Kentucky, and has now turned that opportunity into a job.

Pifer is a double major in both sports business and finance. He started his internship near the end of April, and is now the Season Ticket Sales Executive and the Director of Baseball Operations. He is also the president of NKU’s Sports Business Club.

“I got involved in the Sports Business Club because I love sports, I want to be in the sports world,” Pifer said. “But more than that, I thought it was a lot of fun. I wanted to make it more organized than what is was and help other students with the same process.”

The Sports Business Club meets twice a month and also takes trips to see some of the bigger realms of sports. The club has gone to Cincinnati Reds, Cincinnati Cyclones and University of Cincinnati games, toured different facilities and, of course, supports the Norse as much as they can.

“One of the club’s purposes is to get the [sports business] majors together and even pre-majors,” said Joe Cobbs, assistant professor of sports business. “I think it’s an avenue outside of the classroom to bring industry experience. We try to do a lot of that in the classroom but certainly you can never get too much of that as a student.”

When Pifer began with the Florence Freedom, he was making spreadsheets and doing what Josh Anderson, general manager of the team, wanted him to do.

According to Pifer, when someone called he would take care of what they needed. He enjoys his current position, but wants to move on to bigger and better things in the future.
“I’ll be here right after I graduate; I want to see how much I can really help build this place by getting people in the seats,” Pifer said. “I don’t see myself here in five years, probably somewhere else not in Cincinnati.”

The sports business program at NKU is one of the reasons Pifer decided to come here after leaving Ashland University during his sophomore year. According to Pifer, he was interested because the school had a business college and classes he could take for his major.

Since the major required an internship, Pifer said he was drawn to the Florence Freedom because of his love of baseball. He has played baseball his entire life, including a year and a half at Ashland. After he began interning, he was the only one picked out of 20 interns to begin working full time for the Freedom.

“His dedication in the internship was probably the number one thing that got him his position there now,” Cobbs said.
Pifer credited being able to handle this full-time job and being a student to only having one class this semester. Pifer also thoroughly enjoys his co-workers and that attributes to why he likes it at the Freedom so much.

“Drew is fearless; he’s not afraid of people telling him no,” Anderson said. “He believes in the process and keeps trying if people turn him down. I can help develop everything else, that’s all he needs.”