Recruiting for basketball in the Division I era 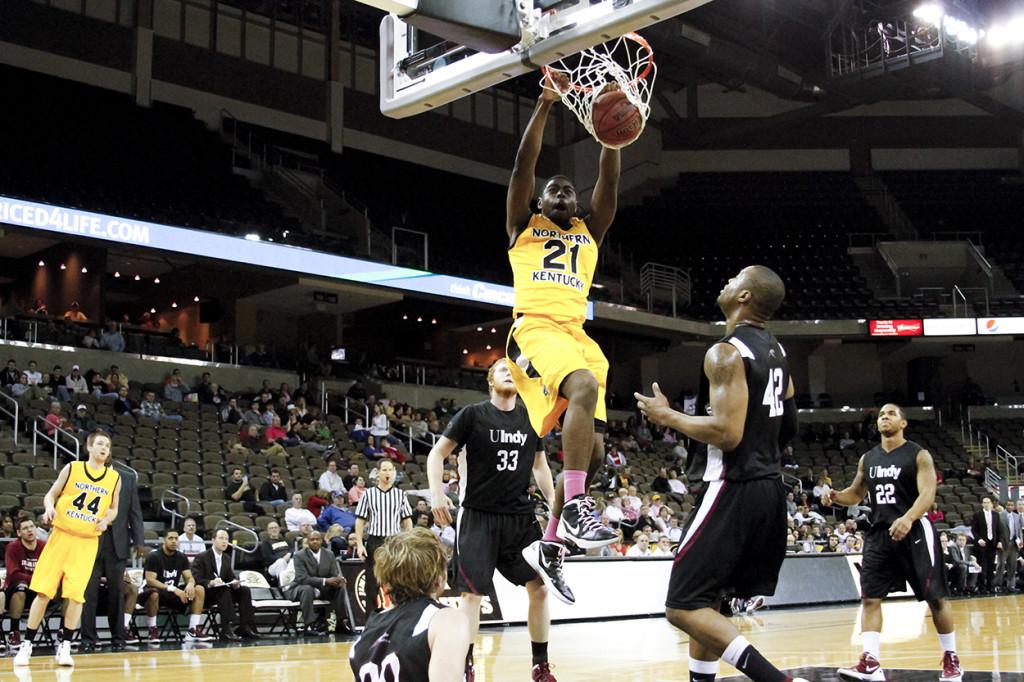 In a state and region where basketball is the dominant sport, Northern Kentucky University will have advantages, disadvantages and changes when it comes to recruiting, as it continues its first year in Division I.

The location of NKU gives the university plenty of competition with schools like University of Cincinnati, University of Kentucky, Xavier University, the Ohio State University and University of Louisville, all within driving distance, but it will take some time for the Norse to schedule teams of that caliber on a regular basis.

“I think it helps us by saying we are in the middle of all of this great basketball,” said Dave Bezold, NKU’s head basketball coach.

The Atlantic Sun also provides the Norse with all away games in the south, since NKU is the farthest institution to the North in the conference.

“The Atlantic Sun is intriguing for kids to have an opportunity to go down south to play games,” Schappell said. “As well as flying to Florida in January and February, rather than taking an eight or nine hour bus ride to Michigan or Northern Illinois.”

Schappell said the label of being a Division I program benefits NKU.
“Kids wouldn’t answer your phone call,” Schappell said. “They are starting to talk to us more now that we are Division I. It’s made it a little easier.”

Since NKU is the new kid in town, there will be challenges to go along with the perks.
When it comes to signing players, Bezold said the conference dictates the level of athlete he is able to get.

“That doesn’t mean we are not going to try and recruit above the conference,” Bezold said. “But, we also have to be smart about it. To say we are going to battle UC or Xavier right now for recruits just isn’t realistic.”

Bezold said the Norse would spend a lot of time and energy competing for top recruits, and would, for the most part, come up empty.

“That is not saying we are not going to eventually,” Bezold said. “The key to being successful is to be able to get a kid that is a little better than what most of the conference has.”

Another challenge NKU faces is getting athletes to join a program that will not be eligible to compete in the NCAA tournament for four years.

“It is going to take a lot of time,” Bezold said. “But each year, as we get closer, we are going to have less resistance than we have now.”

When recruiting new players to a school that has restrictions, Bezold said his staff just tells them the truth.

“The very first thing we do is explain our situation to them,” Bezold said. “We explain to them what we are allowed to do and what our goals and plans are for their career here.”
The recruiting class coming in next year will be the first one that will be able to play in the NCAA tournament.

“We will explain to them that they will have one year as a senior to be able to do this,” Bezold said.
He said if athletes want to redshirt then they can possibly have two years, or if they finish their degree early, they can start into grad school.

“I think you’ve got to be honest with them, but take the focus off of it and focus on all of the positives that you have to offer,” Bezold said.

According to Bezold, the traveling for recruiting is different now.

“In the summer, I thought it was much easier,” Bezold said. “Even though the distances are greater, the time that we spent out was so much less than in Division II.”

Instead of just focusing on recruiting high school seniors, like in the past, the staff must look at juniors, sophomores and freshman.

Bezold said that now it is more about getting NKU’s name on recruits’ radar as soon as possible. He said it can be difficult because freshman that are really talented may change over time.
“By the time they are a late junior, you have a pretty good idea of where they are,” Bezold said. “There are a few exceptions.”

Recruiting is a diverse task that requires coaches to spend many hours doing research, contacting people and plenty of other things that are not technically considered coaching.

“I think people would be surprised with the amount of work and time it takes to cultivate a relationship with a player,” said Kurt Young, NKU’s assistant men’s basketball coach. “Not only the player, but the family and the decision makers in the process. From phone calls to letters; going to watch them play; home visits. It is a substantial amount of time.”

Young said the level of competition in recruiting has changed a great deal because of the resources and traditions other universities already have.

Schappell said people do not realize that coaching is not just a 9-5 job and that during the fall, coaches are gone 2-3 days a week.

“April and July are the two biggest months,” Schappell said. “This July, I was gone most of the month. The NCAA makes it so you get three five-day periods in July, but you have to get there early because of traveling.”

The University of Nebraska Omaha recently made the switch to Division I and is now in its second season.

“There are some junior college players that we felt are out there and that are quality Division I players, but for whatever reason, aren’t getting recruited at the level they should be,” Erwin said.
Erwin said that with making the jump to Division I, coaches are now recruiting different types of players, having conversations with more coaches and that their communication circle will grow.
“With going Division I, we are now looking at bigger, stronger and faster players…that have more length and athleticism,” Erwin said.