Quidditch team back on campus, ready for competition 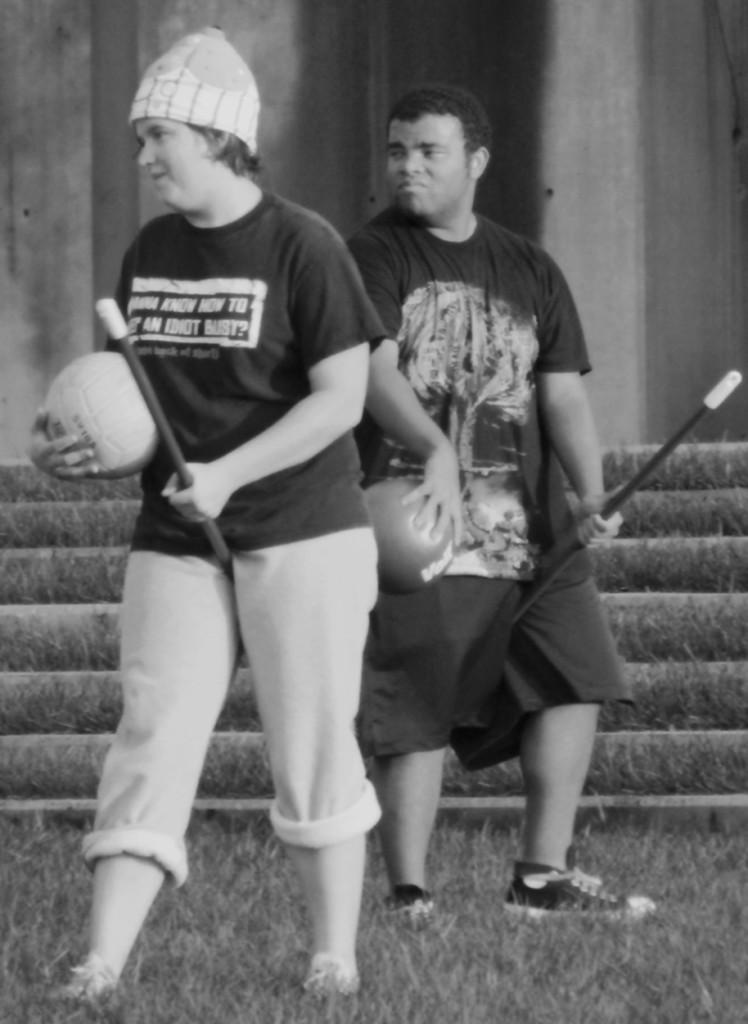 Though their broomsticks won’t actually lift them into the sky, the members of the quidditch team at Northern Kentucky University are still ready to take flight. The numbers are growing and the team is preparing for bigger competition moving forward.

The game, created by J.K. Rowling within her popular “Harry Potter” series, translates well to the real world, even without actual flying brooms (rather, each player must always be in contact with their broom, running throughout the game with it between their legs). Three “chasers” try to score by throwing a quaffle through one of three hoops that are defended by a “keeper,” while avoiding bludgers thrown by “beaters.” While the action unfolds amongst two teams, each team also has a “seeker” trying to track down the snitch. The snitch is a player who has a tennis ball in a sock, and they must avoid the seekers any way they can. Once the tennis ball is taken from the snitch, the game is over.
According to the International Quidditch Association’s (IQA) website, there are over 300 universities and high schools all over the world that are playing quidditch. The team at NKU, which was started last year by quidditch president and junior anthropology major Andrea West, is still in the process of catching on, although it has doubled in size since its first year, going from seven to 14 players.
West is pleased with the growth of the team, noting the importance of continuing to bring in younger players for the future of the team.

“There’s a lot of freshmen and sophomores this year, which I’m happy with,” West said. “There are a lot of us that are juniors, and next year is our last year, so we need people to step up.”
The team also became a member of the Southern Conference within the IQA. They have not had a match against another team yet this year, but West is hopeful that the team can travel to play against a team from Transylvania University in Lexington in November. However, funding can become a problem when the team attempts to travel for a match like this.

“The Sport Club Council offers money, and you can appeal to them for more money,” West said. “We have all of our equipment ready, everything’s really set to go, so really our biggest thing for funding would be traveling expenses.”

In order to help raise more money for things like traveling expenses, the quidditch team will host a fundraiser modeled after a large dance in Rowling’s books called the Yule Ball. The event, to be held sometime in November, will be open to anyone, and offers another chance for students to immerse themselves in aspects of Rowling’s world as it is brought to life.

If the Yule Ball is a success and if the funding works out, West is hopeful that the team can travel to their first official tournament soon.

Despite the fun that the sport offers, the team is also eager for a new and physical challenge.
Gregory Carter, a beater/chaser on the team and a secondary education and English major, emphasized just how intense it can be.

“There’s anger,” Carter said. “You get tired because, if you’re a chaser, all you have to do is get the quaffle. Sometimes you’ll just be running around, and then you’ll get tagged in the face by a dodgeball (bludger)… It can be frustrating.”

West echoed Carter’s comments about the physicality, but also looks to assure people that quidditch is a game for everyone. Even without an athletic background, it is possible to have fun and be pretty good at the game as well.

“People that haven’t learned to play sports come in, and they are some of our best players,” West said.
For more information on joining NKU’s quidditch team contact West at westa5@nku.edu.