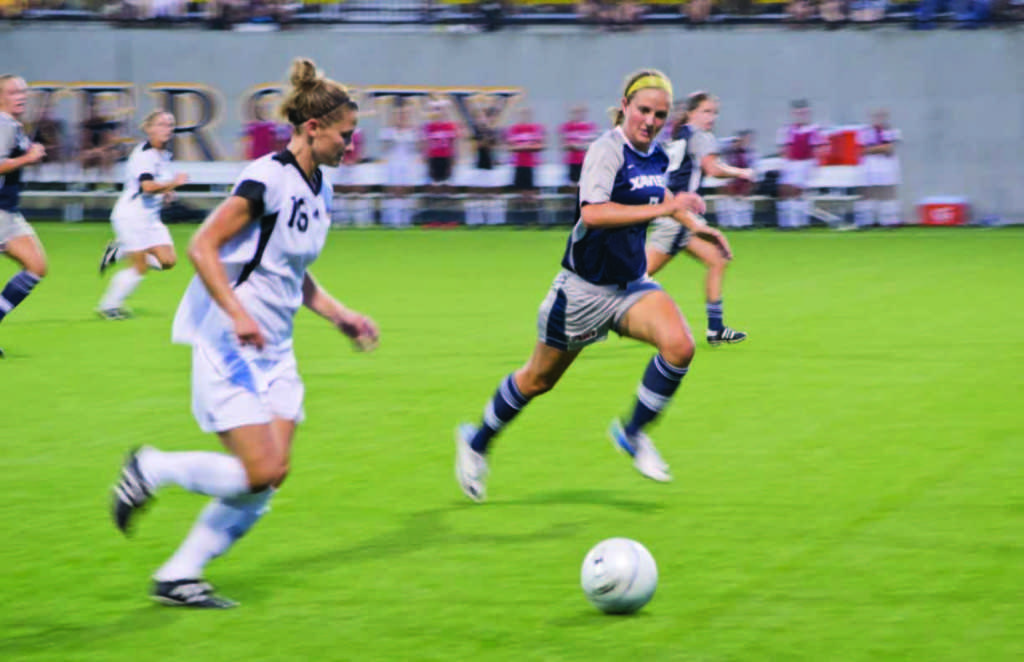 After a long, muggy night, Northern Kentucky University’s women’s soccer team lost to the Xavier Musketeers in overtime. It was the Norse’s first regular-season home game since becoming a member of Division I.

In overtime, the first team to score the “golden goal” wins and there are two 10 minute periods. If neither team scores, the game will result in a tie. Each team was scoreless until the end overtime, when Xavier sophomore midfielder, Margaret Woods, came into the game and hit the game-winning goal.

Both teams struggled to get a close shot in overtime, until the last two minutes, when Woods got an assist by her teammate senior midfielder/defender, Leslie Twehues, to seal the deal. The teams combined for a total of 22 shots, with 11 apiece.

Sophomore midfielder/defender, Kelsey Zwergel, led the Norse with five shots, including two late-game attempts toward the end of regulation.
Zwergel said it is tough to lose in overtime after putting so much effort into 90 minutes. “We just have to come back and be ready to play [the] next game,” she said.
NKU head coach Bob Sheehan said Zwergel created some great opportunities for the Norse.
“Kelsey was tremendous,” Sheehan said. “She brings it everyday in practice.”

The total number of attendance was 1,210, which is the largest amount for a women’s soccer game so far at the NKU Soccer Stadium.
The student section let its presence be known the entire game, especially toward the end.

Zwergel said the fan support was a little nerve-racking at first, but she got used to it.

The loss puts the Norse at 1-4 overall. Next, NKU will go on the road Sept. 9 to face Murray State University at 2 p.m.