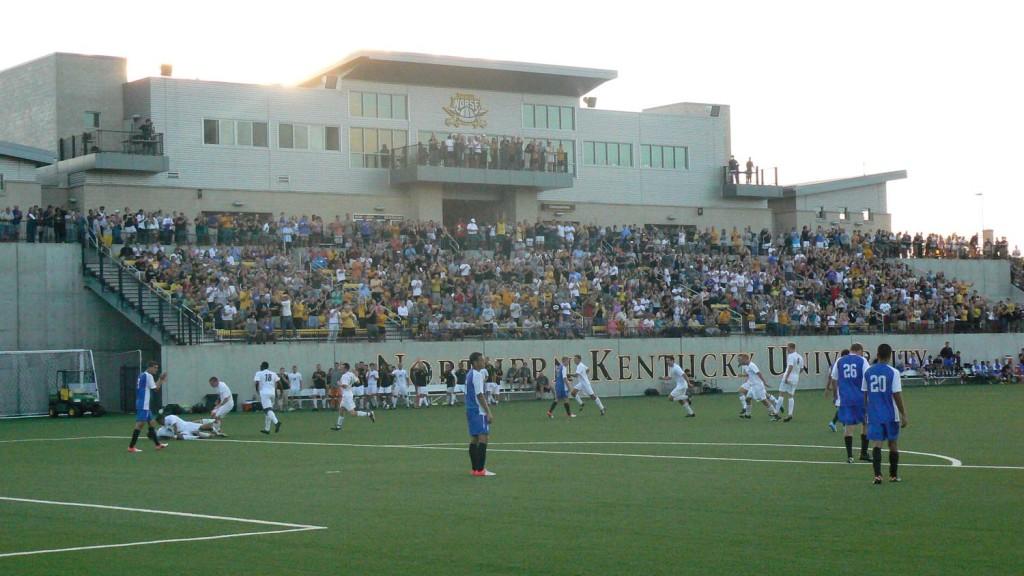 A record-setting crowd came out on Aug. 17 to see the Northern Kentucky University men’s soccer team tie the University of Kentucky, 2-2.

“Looking up and not seeing an empty seat was awesome,” NKU junior Mohammad Salhieh said. “They helped us through this and they were literally the twelfth man.”

A total of 1,206 people attended the game, setting a NKU soccer record, which resulted in the first sellout in NKU Soccer Stadium history.

The Wildcats got the scoring underway when junior defender Steven Perinovic scored on a header off of a corner kick in minute 22.

NKU came back strong scoring a goal by Salhieh on an assist from freshman midfielder Yaw Addai in minute 36 and took the lead on a goal from sophomore forward Cian McDonald in the final minute of the first half.

After a shot from Salhieh was deflected by the goalkeeper, McDonald scored on a shot that floated past the goalkeeper and into the goal on the opposite side.

“It was more instinct than anything,” McDonald said. “Luckily it dipped into the right side of the goal.”

Kentucky came back to tie the score in the 77th minute when freshman forward Caleb Richardson scored after getting by NKU sophomore goalie Toby Frohlich in the 18-yard line.

Head Coach John Basalyga was pleased with the turnout and also with how his team performed.

“After we got use to the pace of the game, we played with a little more composure,” Basalyga said. “Even though we did not score any goals, I think we played better in the second half.”