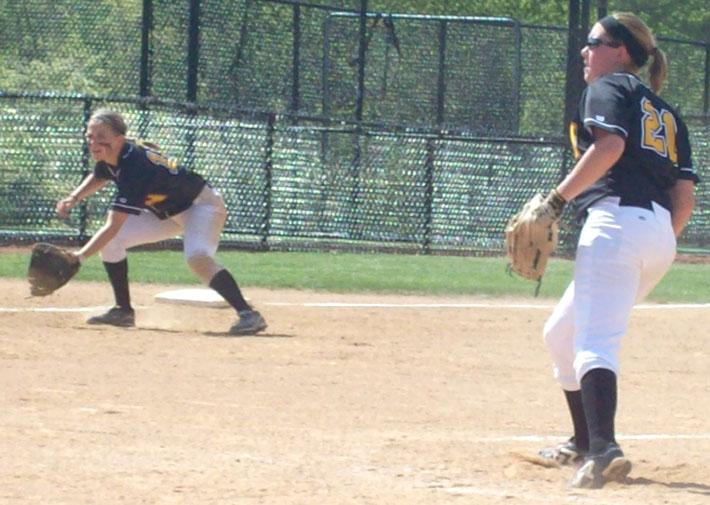 Emily Schwaeble (right) struck out 11 Bellarmine batters in the 5-2 victory on April 18.

NKU, junior pitcher Emily Schwaeble pitched a gem of a game, as she struck out 11 Bellarmine batters en route to a 5-2 victory on a hot, sunny afternoon at The Frank Ignatius Grein Softball Field.

Schwaeble pitched her way out of a bases loaded jam in the first inning to set up teammate, sophomore Mandi McQueen’s solo homerun, which she blasted over the right field fence to give the Norse a 1-0 lead in the bottom of the first inning.

NKU kept the momentum going in the second inning with a two out rally, when sophomore second baseman Dee Dee Davis lined a double to the fence in between Bellarmine’s left and center fielders. Sophomore third baseman Michelle Carson and senior shortstop Jessica Farris followed with back-to-back RBI doubles to give the Norse a 3-0 lead after two innings.

Evan Wigger, a junior psychology major who comes to every home game, said the big inning was typical of the Norse.

“They’re doing pretty good this year, this is how they normally play,” Wigger said.

NKU made the score 4-0 in the third inning when sophomore first baseman Natalie Papi doubled with two outs and was driven home with an RBI single up the middle by sophomore right fielder Dana Jarboe.

Bellarmine loaded the bases in the fourth after senior first baseman Lauren Summe was intentionally walked to set up a play at any base with two outs. Schwaeble got out of the inning unscathed as she retired the Knights, second baseman, Kayla Padgett with a fly ball.

Davis began the Norse’s half of the fourth with a leadoff triple, and a Carson line drive single scored her to make the score 5-0.

Schwaeble remained sharp in the fifth as she retired all three batters she faced, mirroring the top of the inning in which Bellarmine made three consecutive outs.

NKU loaded the bases in the bottom of the sixth, but Knights pitcher, senior Amanda Meyer, held strong and did not allow a run.

Meyer started an offensive rally for Bellarmine when she started the seventh inning with a single to right field. Summe followed with a single, and senior outfielder Cynthia Brown laid down a sacrifice bunt to advance the runners. The Knight’s Megan Murdoch crushed the ball to the fence, scoring both runners and making the score 5-2 NKU.

A frustrated Schwaeble walked the bases loaded with two outs, then struck out Bellarmine left fielder, Erin Sireno, to earn the Norse victory.

NKU freshman, pitcher, Alex Caudill said after the game, that it was a big accomplishment to beat such a big rival.

“We played really well, especially in the first inning,” Caudill said. “Now, our goal is to make regional’s and go from there.”

Sophomore, biology major, Shriver Withrow believes that the team will make the regionals.

“I really like supporting them; they’ve done great this season,” Withrow said.