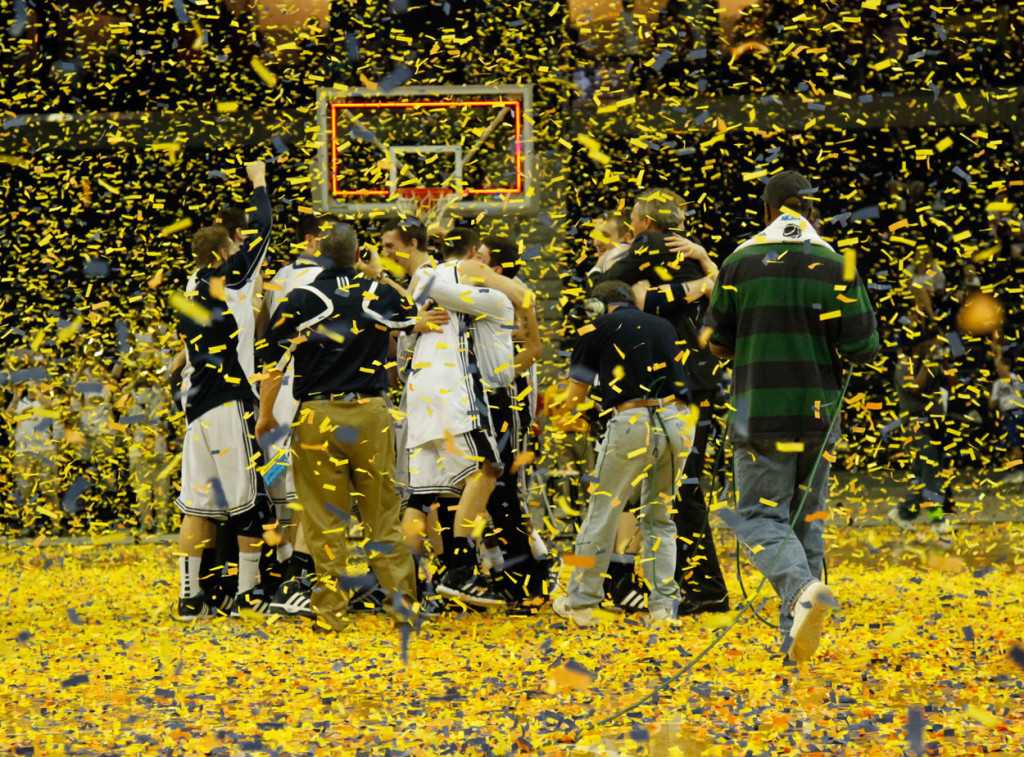 The Division II Men’s Basketball Elite Eight was played at The Bank of Kentucky Center March 21-24 and was an event that took a collective effort to host.

“We’ve got a great team: our staff, the Bank of Kentucky staff, the Northern Kentucky Convention and Visitors Bureau,” Athletic Director Scott Eaton said. “People worked together and put in long hours to make it such a successful event. It was a great success to see the NKU floor and The Bank of Kentucky Center on national television on CBS on Saturday.”

The Elite Eight concluded with Western Washington defeating Montevallo (Ala.) 72-65 to win the championship and to earn the university’s first national title in a men’s team sport.
Junior guard John Allen led five Vikings in double figures with 14 points. According to Western Washington Head Coach Brad Jackson, it was the other side of the ball that was the key for his team’s success in the Elite Eight.

“We felt as though the biggest thing was our consistency defensively and that really proved to be the case,” Jackson said.

According to Jackson, he has had some good teams throughout the years, including one that reached the Final Four in 2001, but his teams always ended up a little short from winning it all.
“Quite a few years, we felt like we maybe had the potential to do it, but for one reason or the other it didn’t happen,” Jackson said. “It is so great to see our team finally be able to break through.”

This was the first of two consecutive years that the event will be held on NKU’s campus. The MassMutual Center in Springfield, Mass. hosted the Elite Eight from 2006 to 2011.
According to Jeff Thomas of The Republican in Springfield, 2,906 people watched the 2011 title game and 8,720 total fans came for the three days of games. Both numbers were attendance lows for the last six years of the tournament being held in Springfield.

The biggest showing of attendance this year was at Session 2 of the quarterfinals on Wednesday, March 21. The session included Midwest Region champion Bellarmine.
Attendance for the games totaled 5,215, while 1,065 came out to watch the championship game. According to Eaton, they would have liked to see bigger crowds throughout the tournament, but attendance sometimes is directly reflected by the location of the incoming teams.

“The two games that Bellarmine played were very well attended, but when you’ve got teams from Western Washington and from Stonehill in Eastern Massachusetts, you might not have a great turnout,” Eaton said. “Even for the National Championship game, we had a decent crowd, so I think it was a good experience for everyone that participated.”

According to Eaton, some of the costs of holding the Elite Eight were renting the facility, regular game expenses for police, entertainment expenses and scorer table operations. There was a hospitality room at the event, and NKU hosted a banquet on Monday night at the Drees Pavilion, both of which incurred expenses.
Eaton said that it is not known as of now if NKU made a profit from the event.

“It is hard to tell that, because we don’t know what all of our expenses are right now,” Eaton said. “We had budgeted some numbers out there for what the costs were going to be, but we don’t have all of the bills and all of the invoices in just yet and we won’t have those for a while.”

Jackson said the experience was “wonderful” and that the facility and all the administrators and staff that ran the tournament were “fantastic.”
“We couldn’t have asked for anything more,” Jackson said.

Undeclared freshman Bradley Frost attended all but two games and said he had fun watching the games at the BOKC, even though the Norse did not make it to the Elite Eight.
“It was different watching other teams play here, but I still enjoyed it,” Frost said. “Especially since Bellarmine lost.”