The BOKC gears up for Elite Eight action 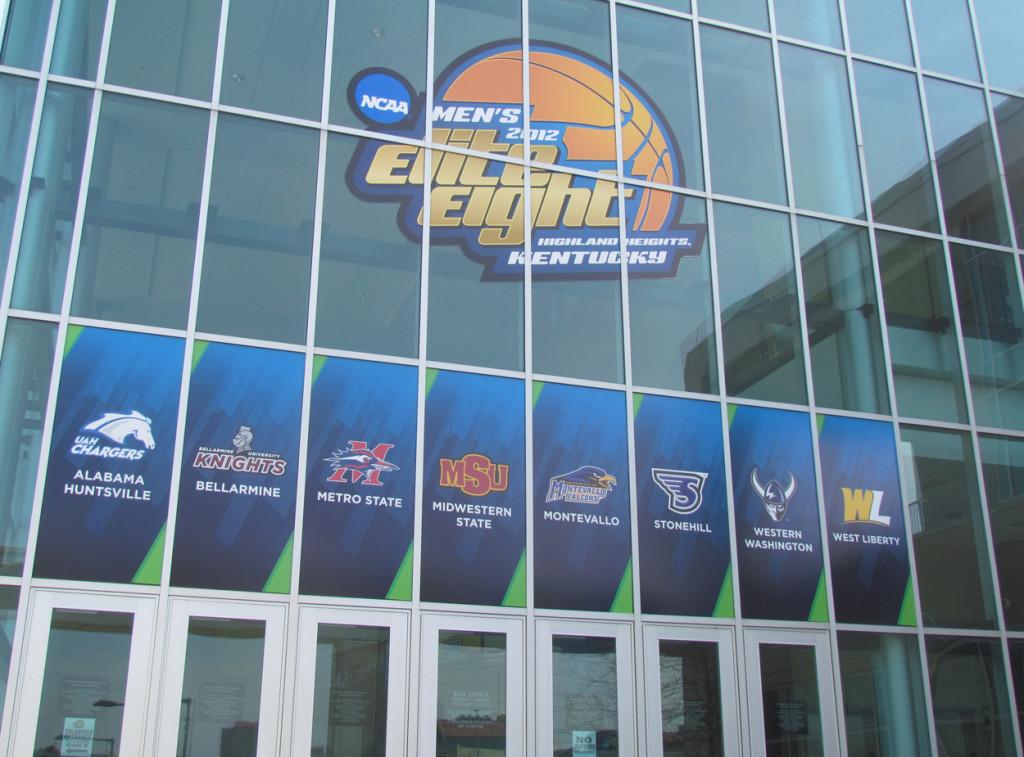 The Northern Kentucky University basketball teams are finished playing this season, but The Bank of Kentucky Center has a few games left to host.
NKU will be hosting the 2012 Men’s Basketball Elite Eight.

“A lot of people have been working very hard to get the building ready,” Athletic Director Scott Eaton said. “We are looking forward to all the teams coming in.”
The Elite Eight features the winners of the nation’s eight regions. The quarterfinals will be March 21 with the semifinals on March 22. The championship game on March 24 will be nationally televised on CBS at 1 p.m.

The first quarterfinal game will match East Region winner Stonehill against Atlantic Region champion West Liberty at noon.
That game will be followed by South Central Region champ Midwestern State playing West Region champion Western Washington at 2:30 p.m.
The first game of the second session at 6 p.m. matches up two teams who made the Elite Eight last year. Defending national and Midwest Region champion Bellarmine gets to play close to home against South Region champion Alabama-Huntsville.
“It’s tremendous for our players,” said Bellarmine Head Coach Scott Davenport. “It’s a great convenience for our players’ families.”
That contest will be followed by Southeast Region winner Montevallo (Ala.) facing Central champion Metropolitan State. Metropolitan State knocked off the No. 1 ranked team in the nation in the regional final game, Colorado School of Mines, to advance.

The field includes the No. 2 through No. 5 ranked teams (Alabama-Huntsville, West Liberty, Bellarmine and Midwestern State) in the latest Division II National Association of Basketball Coaches poll
According to Eaton, the profit NKU makes from the Elite Eight is “solely from ticket sales.”

According to Eaton, it is unclear if NKU will make a profit from the Elite Eight, as that depends on the fan showing for the games. Eaton said they are hoping for the regional teams, like Bellarmine and West Liberty (W.Va.), to have a good turnout.

Eaton thinks the event is great for the university and the surrounding area.
“It exposes the university to other regions,” Eaton said. “It also exposes the region and community to people who haven’t been here before.”
On March 23, there will be the Reese’s College All-Star Game with free admission. The teams were selected by the National Association of Basketball Coaches. Twenty players were chosen, including NKU’s own senior guard Jon Van Hoose.

“I’m so thankful to be going to the Reese’s College All-Star Game,” Van Hoose said. “I really just have to thank my coaches and my teammates for providing me with the opportunity that I had this year, and for helping me along this season, and my previous three seasons here.”