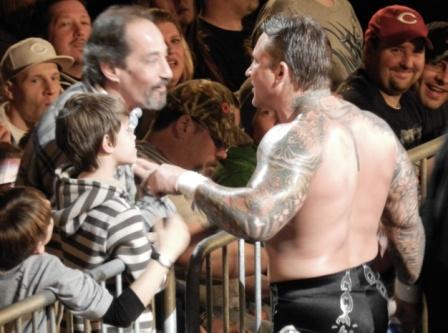 In the world of professional wrestling, or, rather, sports entertainment, Vince McMahon’s World Wrestling Entertainment is king. There are smaller independent companies strewn about the states, but only one company has the potential to challenge the WWE for its throne.

That company is Total Nonstop Action Wrestling. This outfit put on a house show at the Bank of Kentucky Center March 8. A house show is when a professional company, like TNA or WWE, puts on a show that isn’t televised. It’s a way for the companies to reach the smaller venues. There isn’t the same setup that you see on television. The flashing lights and pyrotechnics aren’t used that much, but at the same time a house show is more of an intimate show for the fans and wrestlers.

TNA is a smaller company than the WWE, but there is arguably better talent on the TNA roster. There are big names in the company, such as Jeff Hardy, Kurt Angle, Rob Van Dam and Sting. For wrestling fans, the roster is a who’s who of past, present and future talent in the wrestling world. With names like Hulk Hogan and Ric Flair attached to the company, any curious wrestling fan is going to check TNA out at least once.

Hogan and Flair weren’t present at the show this past week, but AJ Styles, Kurt Angle and TNA Heavyweight champion Bobby Roode were. The night’s show only had seven matches, but those matches plus about a 20 minute intermission lasted a little over two hours. Since a house show isn’t televised, the theatrics and talking segments aren’t as long and there aren’t as many. When a wrestler grabs a microphone at a house show, it is usually to get the crowd excited about the upcoming match.

The matches at a house show can be hit or miss. Out of the seven there was only one that stood out. It featured a veteran of not only TNA but many different wrestling promotions named Kid Kash and Alex Shelley. This match was entertaining because Kash was able to rouse the crowd by provoking a few fans in the front row. The match itself was clean and fast-paced. There were only a few times when Kash or Shelley missed a step.

The only other match that was entertaining was the tag team match that pitted former WWE superstar Mr. Anderson and the nicknamed “Phenomenal” AJ Styles against Christopher Daniels and Kazarian. Styles, Daniels and Kazarian have been with TNA for years and have given great matches at every turn, but something was off in this match. Maybe it was the lackluster crowd, but it felt like the four men were going through the motions instead of trying to put on a good show.

The main event of the evening was rushed and didn’t have any depth. It was a four-way match between four of the biggest names in TNA right now: Kurt Angle, James Storm, Bobby Roode and Bully (Bubba) Ray. This was a build-up match for the April TNA pay-per-view LockDown, which will feature James Storm against Bobby Roode for the TNA Heavyweight Championship. The main event match usually ends the show with a bang, but with this match was more of a dud. All four seemed to be taking it easy because no one wanted to jeopardize an already scheduled title match a month away.

Some people will argue that house shows are better than the televised shows, but that is only when the crowd is given a decent performance. At this TNA show, there were only a few times when the crowd let out a collective reaction or was truly invested in a match. When AJ Styles hit his pele kick during the tag match, the crowd collectively cheered, and during the Kash/Shelley match, the crowd wanted to see Kash’s tattoo ink smeared across the ring.

The WWE put on a house show last year in July. Even though TNA is a smaller company with a smaller fan base, their show was entertaining enough for fans of either company and wrestling in general.