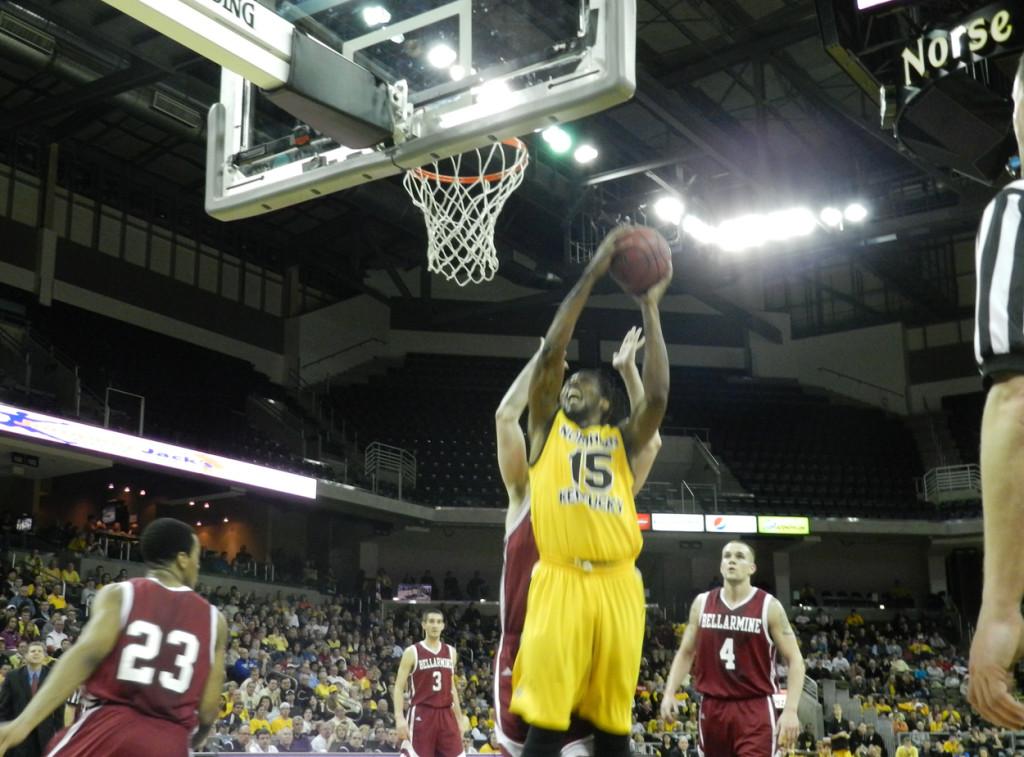 Both teams played against longtime league rival Bellarmine University for their final GLVC regular-season game. Ironically enough, Bellarmine was also the first league team the Norse played when they joined the GLVC in the 1985-86 season. The women won that game 68-67, while the men lost 63-62.

The women’s team came out victorious with a strong win on Thursday, defeating the Knights for the second time this season, 74-53. Head coach Nancy Winstel said her team was ready from start to finish and shot the ball well.

“When you make shots, the game is a lot easier than when you don’t,” Winstel said. “We’ve played games where we didn’t make shots and our defense pulled us out. This game, offensively and defensively, we played well.”

Four seniors were honored in the pregame festivities. Casse Mogan, Sadie Bowling and Stephanie Hodges are all four-year students at NKU, while Maria Bennett is a first-year senior, who transferred from Wright State at the beginning of the season. All four players combined for a total of 47 points in the game.

“We knew we had a lot of scorers on our team,” Bowling said, who had 15 points. “Since it was senior night, our last home game, and the fact that Bellarmine is our biggest rival, we knew we all had to be focused. I thought everyone came and brought it tonight.”

Winstel said junior forward Kelsey Simpson had a special night as well, and played the game of her career. Simpson had 18 points, while adding four blocks and a steal.
Winstel was proud of her team’s performance and the season they had.

“This was an important win and game for us,” Winstel said. “It’s important in the NCAA regional standings and from a conference standpoint.”
The women’s team will continue action on March 1 against Maryville in the 2012 GLVC Women’s Basketball Tournament.
The men’s team, however, lost their game 86-75. The Norse trailed for most of the game, but fought back within striking distance a few times throughout the night. In the end, they were not able to get over the hump, as all five starters for the Knights had double-digit points. The men are now 0-2 against Bellarmine this season.
Head coach Dave Bezold said defensive errors by his team made the difference in the game.
“We were unable to defensively limit the mistakes we made,” Bezold said. “We would cut the lead [offensively], and then go down to the other end and make mistakes. It was too much for us to overcome.”
NKU struggled to find any way to cool down Bellarmine’s shooting, as the Knights shot an overwhelming 59.2 percent from the field. In fact, all of Bellarmine’s points came from its five starters, with senior forward Luke Sprague leading the way with a game-high (and career-high) 28 points.

Bezold said Bellarmine is the best team in the nation, and when an important game like this arrives, it is hard to tell how the players will respond.
“You hope that when the ball goes up, they can relax and settle in,” Bezold said. “I think it took them a little time to do that.”

Three seniors were honored before the tip-off. Jon Van Hoose and Tony Rack have spent four years at NKU, while DeAndre Nealy finished his only season at NKU, having transferred from Kent State at the beginning of the season.

Van Hoose, who had a team-high 19 points, said his time at NKU has been unbelievable.

“I’ve really got to thank all the people I’ve met here at NKU,” Van Hoose said. “This is a great school with great fans. I just have to thank everybody for the support they’ve given me while I’ve been here. I really enjoy this place.”

Bezold said that even though it is upsetting and frustrating that his team could not pull off the win, they still provided everyone with a tremendous season so far.
“This team has been motivated all year,” Bezold said. “They care about one thing, and that is winning. We’ve got tremendous confidence. I know that for sure.”
The men’s team will face off against Kentucky Wesleyan on March 2 in the 2012 GLVC Men’s Basketball Tournament.