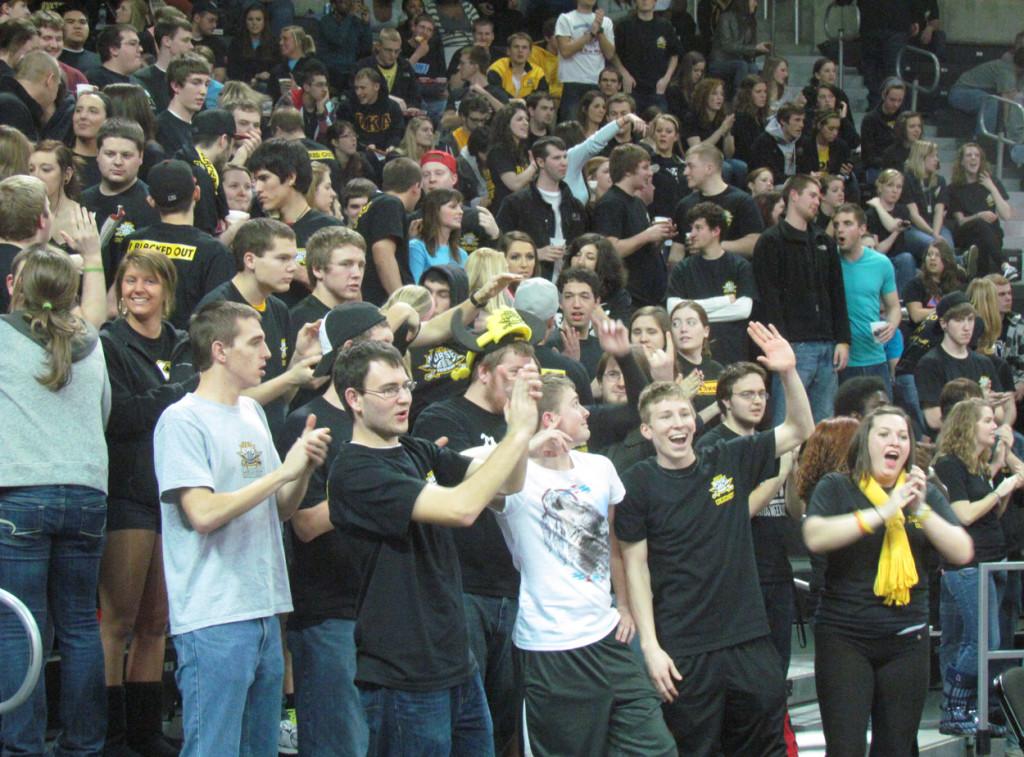 As Northern Kentucky University continues to grow, attendance at NKU sporting events has increased as well.

According to Athletic Director Scott Eaton, the attendance has gone up considerably compared to previous seasons.

“With some of our new staff, we have put concentrated effort on increasing attendance,” Eaton said. “Not only for spectators in general from the campus community, but also especially our students.”
Alicia Lawrence, coordinator of athletic development, said last year the total attendance for the entire 2010-11 season was a little over 19,000 people. With two games remaining in the 2011-12 season, the number has already exceeded that mark and stands at 21,451.

In an attempt to generate more student attendance, the athletic department started the student rewards program, which is not only for basketball, but any of the home events. Eaton said it has paid off with very high dividends.

“Our marketing people are doing a great job at getting the product out there and attracting students and fans to games,” Eaton said. “The other thing is the [basketball teams] are winning. That says a lot in itself. Everyone wants to see a winner.”

NKU Athletics collaborated with Norse Force, a school spirit organization, at the beginning of the year. Eaton said a large part of the student rewards program has been entirely possible because of Norse Force.

“I think we have a great partnership,” Eaton said. “Sara Daugherty is president of that group and she is gung-ho. She has been one of our best fans throughout her entire career, but to see the Norse Force evolve under her tutelage and working with Jeff Iker, Brittany Booth and Stephanie West has been great.”
Iker is the coordinator of student orientation and parent programs. Booth and West both work with athletics. Booth is the marketing and promotions director and West is the coordinator of athletic marketing.

According to Eaton, season tickets sales have been steady going into next season.
“We have had an incentive once we made the Division I announcement for people to do pre-sales for next year,” Eaton said. “I think that there is a great deal of excitement in the community about the move to Division I, and it will continue to be there.”

Lawrence said NKU is running a promotion to generate new season ticket holder sales, and there has been over 60 new deposits since the Division I announcement on Dec. 8. She said this is great momentum for the transition to Division I next year.

While NKU students have free admission to all athletic events, Eaton said there have also been a lot of different promotions giving out complimentary tickets to youth groups.
The NCAA chose NKU to host the 2012 and 2013 Division II men’s basketball Elite Eight at the Bank of Kentucky Center. The eight teams competing will be the regional champions from the NCAA tournament and Eaton said NKU is focused on obtaining one of those spots.

“The tricky thing with talking about the Elite Eight right now is no one knows who is in it,” Eaton said. “I think our men’s program has showed they can play with anybody in the region and probably anybody in the country. We are hoping to see great numbers and a great following if NKU is fortunate enough to play in the Elite Eight.”