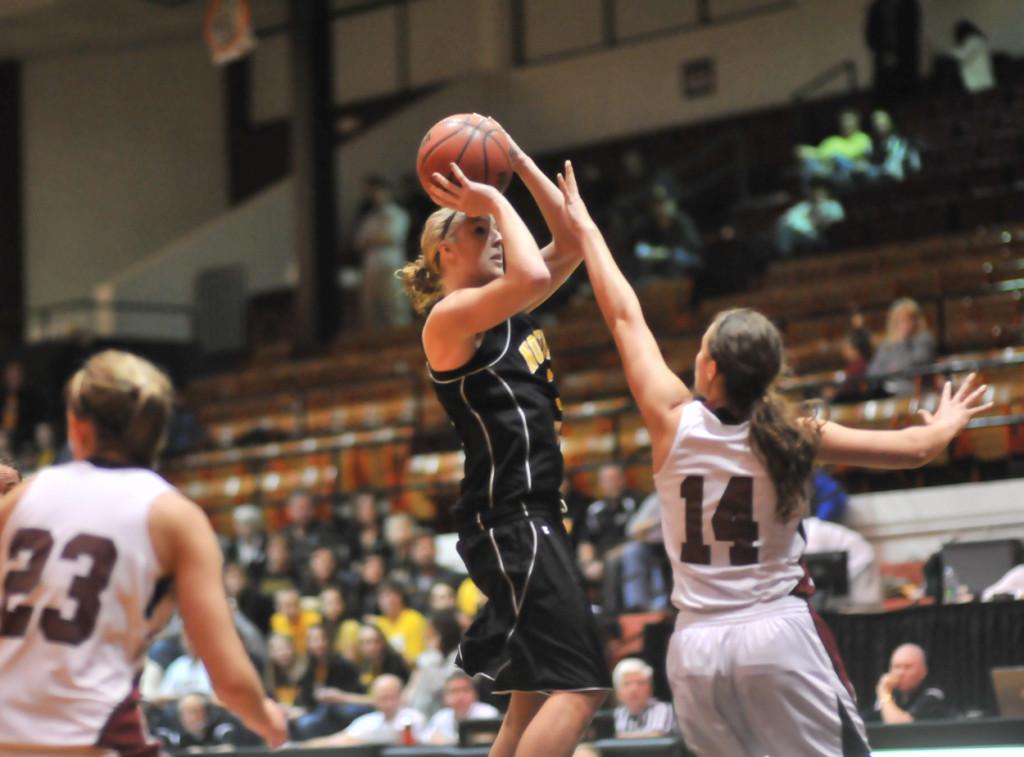 More than halfway through the season, Northern Kentucky University’s men’s and women’s teams battled conference rival Bellarmine on Monday night and had different outcomes.
The women’s team earned its 800th all-time win, defeating Bellarmine at Knights Hall in Louisville, Ky., 72-65. However, the No. 8 ranked men’s team fell short to the No. 3 ranked and defending NCAA Division II national champion Knights with a score of 64-60.

After the game, head coach Nancy Winstel told the team that hitting the 800 mark was a big deal and she said the players were excited about it.
“When you are part of history it is exciting,” Winstel said. “I think our players understand that they are part of a tradition that goes back to the mid-70s, when this program started.”
Junior center Ellen Holton led the Norse in scoring with 21 points, shooting 9-for-13 from the field. Senior guard Casse Mogan added 17 points, seven rebounds and six assists.
NKU held a 62-60 lead with less than two minutes remaining and ended up finishing off the Knights with a 3-pointer from Holton and two free throws apiece by senior forward Sadie Bowling and junior guard Jaimie Hamlet.

Winstel said she thought the players came together for a really good team win.

“You are always going to have your key scorers, but I think if you are going to be successful, everybody has to understand their roles and play their roles,” Winstel said.
The men’s team was not as fortunate and failed to complete a second half comeback.

After trailing at halftime by 12 points, the Norse opened the second half with a 10-0 run to pull within two points just to see the Knights increased the lead back to 13 points. The Norse made another effort to come back, but were only able to get the deficit within two points in the final minute before losing by four. The Knights sealed the victory by completing two free throws with 9.1 seconds remaining.

Senior guard Jon Van Hoose led NKU with 14 points, while Ernest “Stretch” Watson added 13 points and pulled down 10 rebounds.
NKU entered the game as the nation’s best 3-point shooting team, but only hit 25 percent (6-for-24) from behind the arc on Monday night.
Head coach Dave Bezold said that the team’s 3-point shooting is the difference in whether or not it wins against very good teams.

“Against average teams on your home court, you can get away with that most nights,” Bezold said. “When we are on the road against one of the top teams in the nation, we were very fortunate to even have a chance with those types of numbers.”

This is the second consecutive loss for the men’s team, after tying the school record for best start with 13 straight wins, then losing to Drury on Saturday.
The women’s record now stands at 12-3 for the season, including 5-2 in Great Lakes Valley Conference play, while the men’s record is 13-2 overall and also 5-2 in GLVC games.
The men’s and women’s teams’ next contests will be at home against Wisconsin-Parkside on Jan. 19. The women take the court at 5:30 p.m. and the men are scheduled to play at 7:30 p.m.
Thursday is also “Cheer for Chipotle Night.” The first 250 students & 250 fans will receive buy one, get one free Chipotle coupons, and the first 250 students will receive a foam Viking helmet.
Also, the homecoming prince and princess will be announced and the “Homecoming Helmet Competition” will be held during the women’s halftime. The “Chipotle Fan Favorite Helmet Competition” will run from Jan. 20-22 on http://www.facebook.com/nkunorse, and the winner of most likes receives 30 free Chipotle burrito coupons for organization and NKU spirit gear.