Division I brings changes for NKU 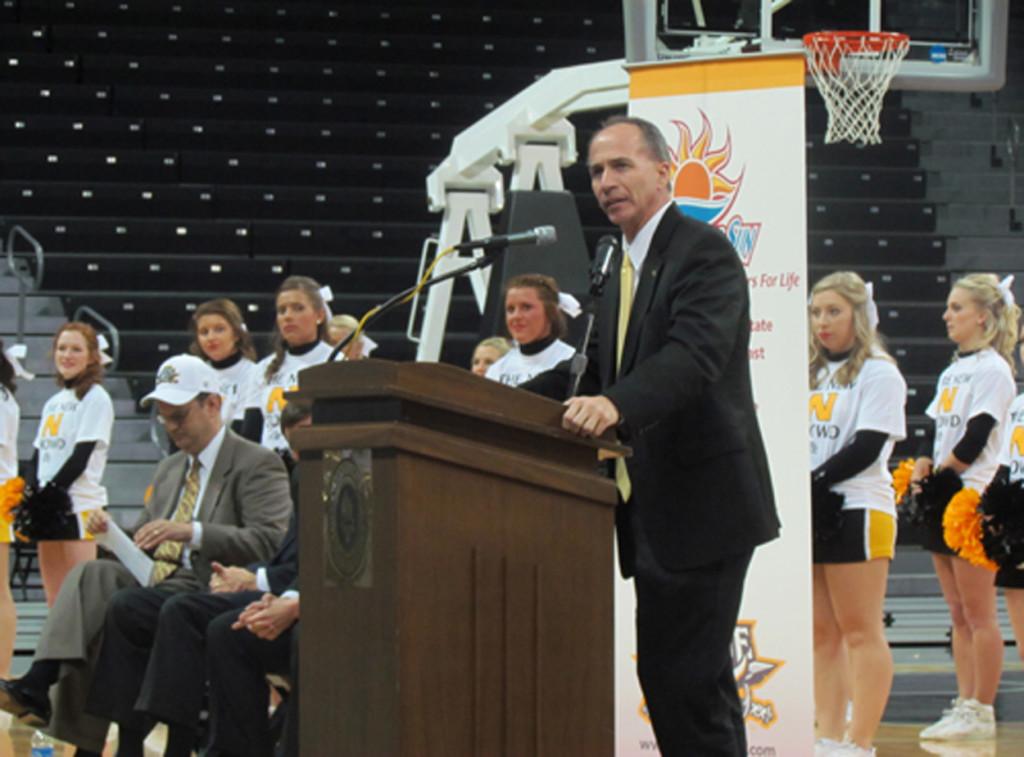 Now that the anticipation of joining a Division I conference is over, Northern Kentucky University is preparing to move to the next level with plans to keep on growing.

First, NKU will go four years without competing in NCAA post-season play, but the teams can collect regular-season awards.

“We are able to compete in Atlantic Sun regular-season titles starting right away next year,” said NKU Athletic Director Scott Eaton. “All of our student athletes will still be eligible for all-conference, All-American and those types of accolades that are available, which is very important.”

Eaton said all NKU coaches’ aim to be the first one to win an Atlantic Sun regular-season championship, which every team will have the chance to do next year.

“We have already received the schedules from the Atlantic Sun Conference,” Eaton said. “We are fully integrated into all of the schedules next year and our teams and coaches are very excited about it.”

Eaton said he is confident the Norse will still be an attractive spot for recruits, even though it will not be eligible for the NCAA post-season tournament.

“We are still NKU,” Eaton said. “We are still recruiting the way we have always recruited. Our facilities and academic programs are outstanding. We have a rich tradition of success.”

NKU also welcomes any opportunities to be on local or national television, but no official plans have been made.

“We already broadcast radio on 1160, which has been wonderful for us,” Eaton said. “All of our basketball games are also web-casted so they can be seen anywhere.”

Eaton said another way NKU will be able to get exposure is to be a part of tournaments that are already involved in an ESPNU package.

“If we are able to compete in some of those tournaments, that would give us immediate access to those type of television opportunities,” Eaton said.

Eaton expects to compete right away but understands that it may take some time for all of the sports programs to adjust at the higher level.

“If you look at some of the reclassifying institutions in the last decade, some of them have taken quite a few years to get back to that [successful] level,” Eaton said. “We will be looking for some patience from our fan base.”

Eaton said one of the biggest changes Division I will bring is that people might be able to identify and relate to a lot of the teams NKU will play, unlike the opponents it competes against right now.

“I think it will be fun to bring in some teams that we have only been able to play in exhibition games,” Eaton said. “It would be wonderful to bring Xavier on campus, or Ohio State, Cincinnati, University of Kentucky, Louisville, Indiana or any of those type of local schools that would draw some interests and that people can relate to.”

Compared to other conferences that NKU was looking at, traveling will be a little more difficult, opposed to the Ohio Valley Conference or the Horizon League, according to Eaton.

“All of those institutions were in driving distance,” Eaton said. “Clearly, with the four institutions in the Atlantic Sun that are located in Florida, there is no way we can lose two days of missed class time being on a bus, so we will be flying. We really do not fly a great deal, so it will be an adjustment.”

Eaton said funding this move, internally and externally, may be a challenge for NKU, so there will be a $6 million Division I giving campaign in the very near future, according to Eaton.