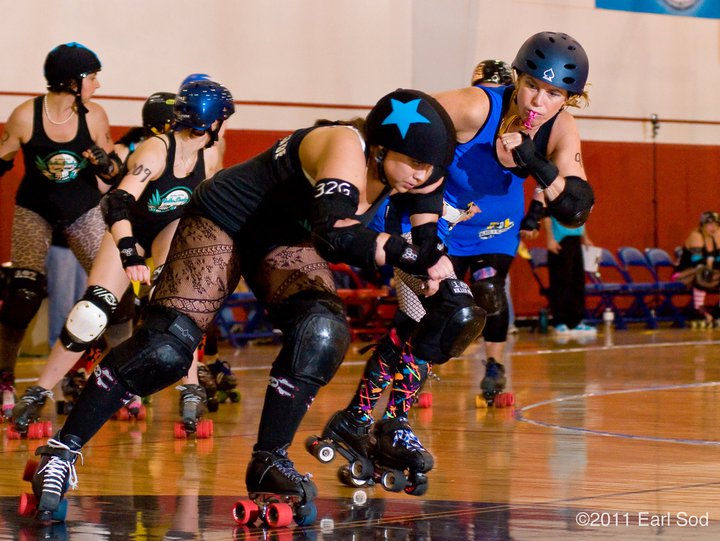 The Black-n-Bluegrass Roller Derby League will begin playing at the BOKC. The league hopes to attract new fans.

Northern Kentucky University has added another form of entertainment to The Bank of Kentucky Center, as the Black-n-Bluegrass Roller Girls have skated their way to the arena.

The Black-n-Bluegrass Roller Girls is a flat track roller derby league, owned by the skaters. The league consists of two teams, the Blackouts and the Shiners. The skaters in the league do not yet know which team’s roster they will be a part of, as each roster has yet to be announced.

In May 2006, the league initiated their first season in the Florence Fundome. After completing the 2008 season, they continued to grow from their initial fan base, and eventually moved to the Midwest Sports Complex in Florence. As the league continued to grow, the Black-n-Bluegrass Roller Girls determined that the complex became too small as well, and a change of venues was once again pushed forward.

On Nov. 1, an agreement was reached concerning the league using the Bank of Kentucky Center. The league thinks this is the perfect venue to accommodate the fans and will help them continue to flourish.

“Teams that go from a small venue to a large arena, like the Bank of Kentucky Center, will not only help their league grow but will also help roller derby grow in general,” said Richelle Davis, a skater with the league.

Davis (nicknamed “Silverose”), a blocker on the Blackouts team a year ago, will be starting her fourth season in May 2012. Davis did not know how to skate when she first started. After her first skating lesson, it did not take long for Davis to become attached to the sport.

“I didn’t even know about the sport of roller derby, so I didn’t really have any set goals when I joined,” Davis said. “I really had to start from scratch by learning how to skate on my first day. After that, I just fell in love with the sport.”

Another skater who fell in love with roller derby was Natalie Gardner, (nicknamed “Natural Disaster”), the Blackouts team captain last year. Gardner is a pivot/blocker who has been with the league for four years. She found out about the Black-n-Bluegrass Roller Girls through a friend when she attended a match. Gardner was so enthralled, she decided she wanted to be a part of the team.

“I had played sports all throughout my life, and I had always joked around about being built for roller derby,” Gardner said. “I was never a skater though, so I went to rinks during little grade-school parties to practice skating. After that, I tried out and actually made the team.”
Not only does Gardner admire the toughness of the sport, but also loves the trust she shares with her teammates.

“With playing as many different sports that I have, the aspect I enjoy the most is being part of a team,” Gardner said. “I absolutely love all the girls we have on our team. Their personalities and backgrounds are so different from one another; and when you can get [around] 50 diverse women to all come together and be centered on something they’re all passionate about, that’s really awesome.”

“A move to the Bank of Kentucky Center will bring us more recognition amongst the league, and draw in more fans as we look to compete nationally,” Davis said. “We should be making that move into the national level at the start of next season, which will be good timing for us.”

As the league makes the move to a college campus, they are looking to bring in more student fans. Both Davis and Gardner think with the move to a bigger and closer facility, the level of the up-close-and-personal feel with the sport will draw more and more college students to their matches.

“It’s the best 3-D experience you can possibly have,” Gardner said. “You’ll have live action happening right in front of your face and have the possibility of a roller girl be thrown right into your lap. It’s such a fun experience to be a part of.”

For more information on the Black-n-Bluegrass Roller Girls, visit http://www.black-n-bluegrass.com.