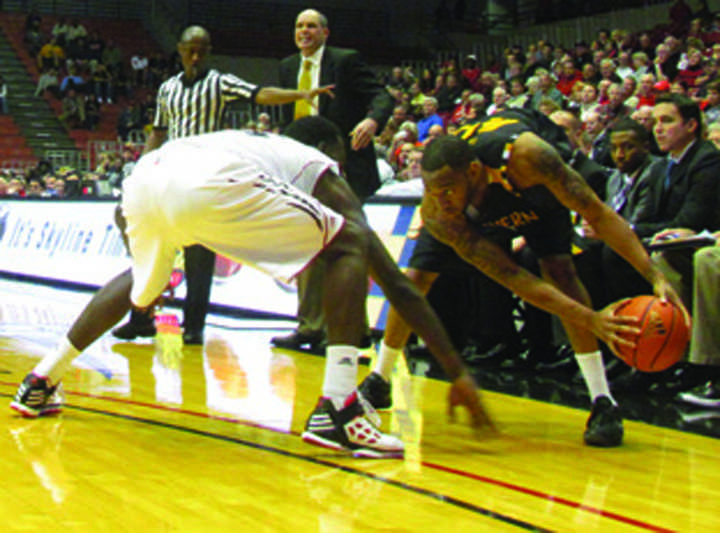 The Northern Kentucky University men’s basketball team once again enters the season with the hope of making a deep run into the Division II NCAA basketball tournament.

The Norse will expect to have a strong performance from the 3-point line this season, led by returning senior guard Tony Rack and senior forward Jon Van Hoose. In addition, the team has another shooter this season who is expected to be just as effective in junior forward/guard Eshaunte Jones.

Jones has been a key player off the bench, averaging 8.7 points per game, which is the fifth highest total on the team. Jones has been considered a sharp-shooter for his collegiate career and has continued that as a Norse, shooting .455 percent from the 3-point line, hitting 5 shots in 11 attempts. He has played in three out of the four games, helping the Norse to a 4-0 start. His best performance this season was against Urbana on Nov. 21, scoring 13 points in just 19 minutes, while shooting 50 percent from the field.

Head coach Dave Bezold said he is a “big perimeter body” that “gives more size on defense,” and he is also a “tremendous scorer.”
Jones is entering his junior season, but is only in his first season with the Norse. Jones originally committed to play for Oregon State University, but ended up starting his college basketball career at the University of Nebraska after Oregon State made a coaching change.
Due to a foot injury, Jones was forced to take a medical redshirt his first year at Nebraska.

“Eshaunte is someone who I have enjoyed coaching and watching him grow as a person during his time at Nebraska,” said Nebraska head coach Eric Sadler in a statement to the press. “He has always worked hard and been a good teammate and is showing a lot of maturity by putting a priority on finishing the semester the right way. I wish him the very best in the future.”

Jones’ shining moment at Nebraska came in a game on Feb. 19 against Texas, who was ranked third in the nation. Jones hit a 3-pointer that shifted the momentum in the game that helped Nebraska claim a 70-67 victory.

By competing in the Big 12 Conference in Division I, Jones is familiar with playing against elite opponents.

“He has experiences a lot of the team doesn’t have; by playing against great competition, in big arenas and hostile environments,” Coach Dave Bezold said.

Jones decided to transfer from Nebraska to be nearer to his family in Fort Wayne, Ind.

“It’s a blessing to be closer to home,” Jones said. “That is the reason I came back.”

It did not take long for Jones to make an impact for the Norse. In a scrimmage against West Virginia University, he scored 15 points, including the game-winning 3-pointer with 1.1 seconds left.

It was the first time NKU defeated a Division I program in 27 years.

“That [the shot] was not the fun part,” Jones said. “The fun part was that we won the game.”

Jones feels being a Norse is enjoyable, as he has connected well with his teammates.

“It is fun being here and being around the players,” Jones said.