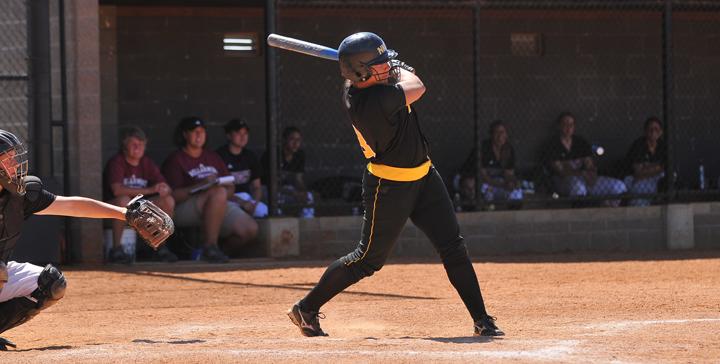 The Northern Kentucky University Softball team split a two-game series on Senior Day against Great Lakes Valley Conference rival Bellarmine (23-29, 11-13 GLVC)’ April 25 at Grein Softball Field. The Norse acknowledged its three seniors, third baseman Cara Parker, left fielder Shatona Campbell and first baseman Amanda Smith after the first game concluded as they prepared for their final home game. The Knights took a 4-0 lead through the first five innings, scoring two runs on four hits in the fourth and two runs in the fifth. The Norse rallied in the home half of the seventh when sophomore designated player April Ehlers singled up the middle to get a runner on the base paths.’ Junior second baseman Rose Broderick knocked in Ehlers on a single to left to cut the lead to 4-1 with just one out.’ Freshman shortstop Jessica Farris grounded out to the shortstop to drive in sophomore pinch runner Jamie Raabe.’ NKU would fall short to BU despite the late game surge.’ They went on to lose 4-2. Sophomore pitcher Chelsie Roy pitched a complete game, giving up 10 hits and four runs.’ Roy was slapped with the loss, moving her record to 13-9. The Norse took Game 2 in six innings thanks to a walk-off grand slam by freshman right fielder Ashley Gates.’ NKU scraped across two runs on a string of singles in the bottom of the first to jump out on top. Broderick tripled in the bottom of the second and Farris picked up a sacrifice fly to plate the third run of the contest for NKU. Holding the Knights without a run, the Norse tallied three more runs in the bottom of the fourth to go ahead 6-0.’ Back-to-back singles set up Broderick for her second three-bagger of the afternoon.’ Broderick then scored on a fielding error. Bellarmine’s only run occurred in the fifth inning, when freshman catcher Jordan Basham ripped a solo home run over the right center field wall. Ehlers pitched all six innings and gave up one run and three hits with five strikeouts.’ Ehlers improved her overall record to 14-12. With one out in the sixth, Farris doubled to start a rally. Senior first baseman Amanda Smith singled to put runners on the corners and senior third baseman Cara Parker poked a double to center field to record the RBI.’ With runners on second and third, junior designated player Sam Del Vecchio drew a walk to load the bases.’ Gates stepped up to the plate and crushed the first pitch she saw over the fence for the walk-off grand slam.’ NKU won the game 11-1. Gates anchored a spot in the NKU record books for most home runs in a single-season as she recorded her 11th long ball of the season.’ The previous record was set by former outfielder Katybeth Coode, who hit 10 homers during the 2008 season. ‘It’s the greatest accomplishment of my softball career,’ said Gates of the feat. The Norse (27-21, 13-11 in the GLVC) finished the regular season in sixth place in the conference and now set their sights on the GLVC Tournament, which will be played in Peoria, Ill. beginning May 1-3.’ NKU is currently ranked eighth in the NCAA Division II Midwest Region and hope to make a statement in the tourney.’ The trip will mark the first time the Norse have earned a spot in the playoffs since the 2006 season, according to NKU Sports Information. ‘It’s phenomenal for the team to get back to the GLVC tournament,’ Gates said. ‘We have finally come together as a team, as we all pull for each other. It’s just a great feeling.’ The No. 6 seed NKU will face No. 3 seed Indianapolis (28-16, 17-7 GLVC) in the first round of the tournament. ‘