Fall Convocation 2022: Here’s what you missed 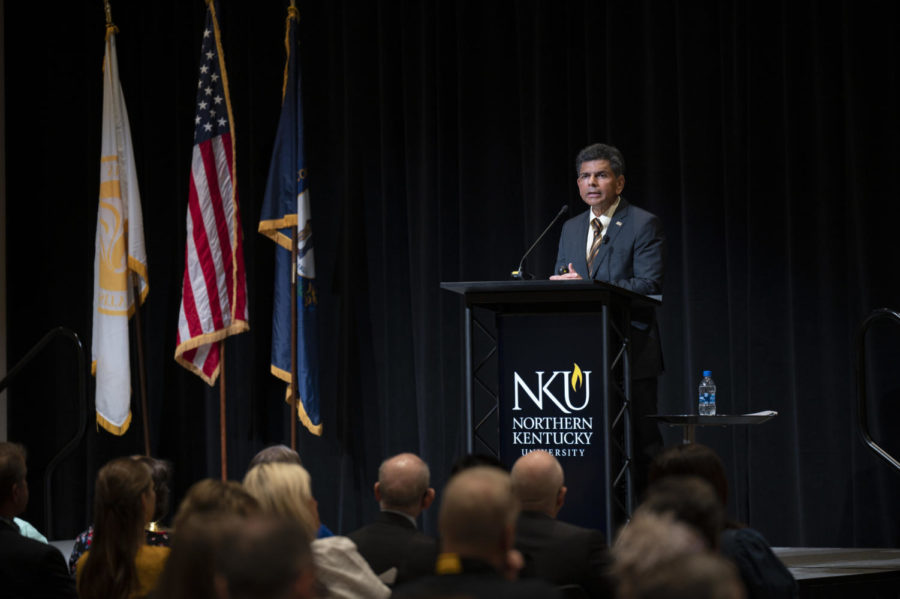 Tuesday afternoon, NKU held its annual Fall Convocation to kick off the Fall 2022 semester. The hybrid event took place in the Student Union, as well as virtually through a livestream.

Cecil recognized the achievements of NKU faculty and staff over the last academic year, leading him to speak about the Frank Sinton Milburn Outstanding Professor award, which has been in place at NKU since 1970. The winner of this award was Dr. Jonathan Cullick, who has taught at NKU for over 20 years in the English department.

The event then shifted to current SGA President and Regent Daniel Meyers, where he spoke about the upcoming school year.

“We have to continue to cultivate this environment of progress and be ready for challenges,” Meyers said. “And like the founders, we have to put student success at the center of all we do.”

Myers then welcomed NKU President Dr. Ashish Vaidya onto the stage, where he spoke on crises facing students as well as what will be new this Fall.

Vaidya mentioned how Kentucky has been hit hard by recent flooding and the pandemic and the implications from that regarding students’ mental health. In response to this, Vaidya explained how he believes that prevention, treatment and education are ways to battle these ongoing issues.

Vaidya then mentioned Success by Design, which is NKU’s strategic plan that focuses on student success. This includes the continual implementation of a task force dedicated to progressing to a hybrid campus that serves both traditional and non-traditional students.

According to Vaidya, some of the items new for this Fall include:

Four additional gender-neutral restrooms. Locations of the restrooms include the third floor of the SU, one on the fifth floor of Nunn Hall and two in Steely Library on the fourth floor.
A new initiative, Help a Norse, is being implemented this fall to help individuals refer students for support while completing their degree. The website is available to use for students, faculty and staff.

Vaidya also mentioned how NKU is taking steps towards a comprehensive compensation plan. This will include a $7 million investment to increase minimum pay ranges, compression adjustments, faculty pay compression and a three percent pay increase for all eligible NKU employees.

Vaidya closed the event by explaining how hopeful and excited he is for the upcoming school year.

“Give yourself permission to be unapologetic, passionate and vocal fans about Norse Nation,” Vaidya said.