Updates include the separation of first year and upper division students and the re-opening of Callahan Hall. 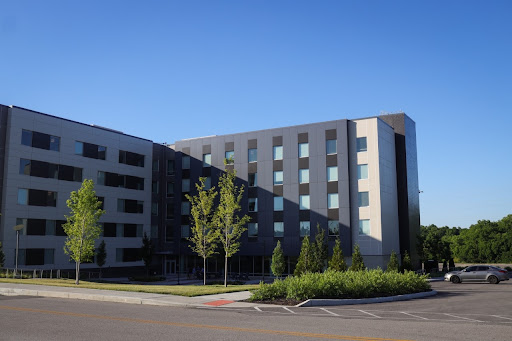 New Residence Hall will be a first year student-only community in the fall.

NKU Housing has implemented some significant changes to the residential experience in preparation for the 2022-2023 academic year.

One of the most impactful changes, Director of University Housing Scott Patton explained, is the separation of upper division and first year students. Kentucky Hall, Commonwealth Hall and New Residence Hall will be available only to freshmen. Norse Hall, University Suites and Northern Terrace will be open for upperclassmen. Callahan Hall will be the only residence hall featuring both categories of students.

The need for a separation of residence halls was proven by the housing department’s research as well as student feedback.

Patton found that research supported the notion that students who live on campus perform better academically than those who do not. With this in mind, NKU, along with many universities across the country, has decided to cultivate residential communities that will connect students who are taking similar courses.

“Students will get a more intentionally crafted residential experience that contributes to academic success. That’s really important to us because we’re here to make sure we are helping students achieve their academic goals,” Patton said.

Director Patton also shared that some students felt the on-campus experience had been lacking in previous years. This can in part be accredited to the difficulty of serving the needs of all students when they are living in shared communities.

“As a first year student you’re learning how to navigate college. Where’s the financial aid office? Where’s the dining hall? How do I coexist in a space with another student I’ve never met before? Upperclassmen students should be having different kinds of conversations [such as] workplace readiness and financial needs and matters,” Jackson said.

The re-opening of Callahan Hall is another big change for the upcoming academic year that was largely impacted by student feedback.

While Callahan Hall was originally intended for first year students only, many upperclassmen consulted with the housing department about their desire to reside there. Patton sought to honor these students’ requests, so both freshmen and upperclassmen will occupy the residential community in the fall.

After being closed for construction during the 2021-2022 school year, Callahan Hall will unveil an interior facelift.

Another new feature for Callahan Hall is a brand new Living Learning Community. Global village will be the newest LLC on campus, which will host a mix of international students and those with globally-centered majors.

Some of the majors to be hosted in the global village community include international business, global affairs and world languages, according to Patton. The LLC seeks to ensure international students feel connected and accepted by sharing a community with other globally-minded individuals.

Both Patton and Jackson sought to remind incoming and returning students of the benefits to living on campus.
While NKU’s housing experience is unique since many students are commuters, this makes the department even more caring and familial, Patton said.

“[NKU Housing] is just the right size. We’re not too big, and we’re not too little. We’ve seen vast improvements that tell a story that students value their on-campus experience, and students here are more engaged, more cared for, and more supported because they live on campus,” Patton said.

For more information regarding NKU Housing and changes for the 2022-2023 academic year, visit https://inside.nku.edu/housing.html.