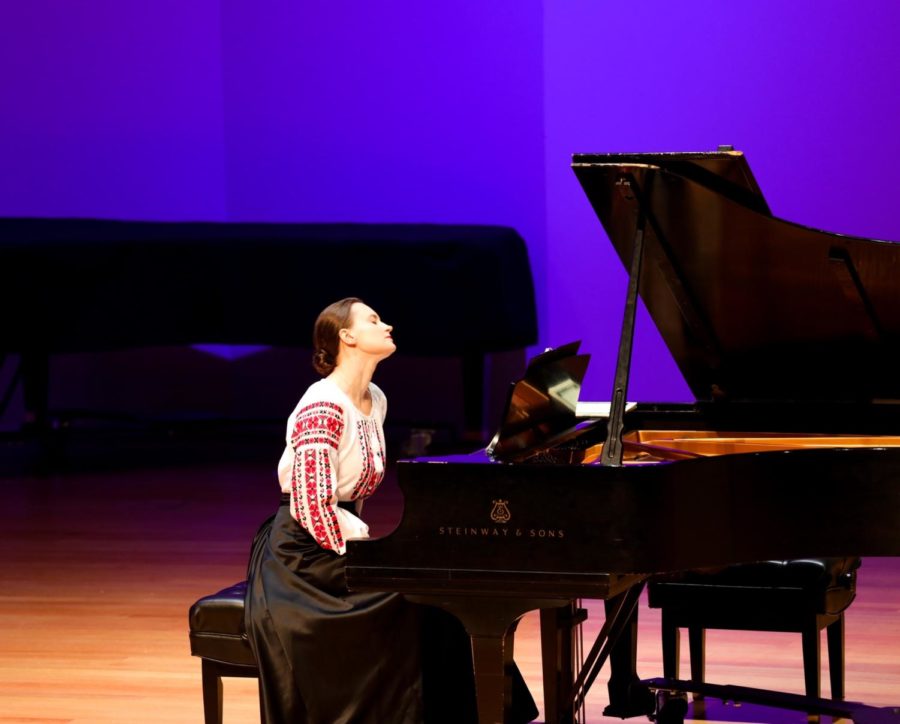 The stage was lit in blue and yellow, colors of the Ukrainian flag. The hall resounded with music and thunderous applause. A benefit concert for Ukrainian refugees was held at Greaves Concert Hall the night of April 22, with performances from Northern Kentucky University Ukrainian alumni alongside the School of the Arts.

Anna Shelest and Dmitri Shelest, natives of Kharkiv, Ukraine, performed seven pieces of music for two hands and four hands piano that span a wide variety of styles, from a rousing opera arrangement to energetic dances to dramatic blues.

“The idea of tonight’s program was to present Ukrainian and American composers, some of which are beloved treasures and some are gems deserving their spotlight, especially at this time of the attack on Ukrainian national identity,” Dmitri said in a speech before their performance.

According to the concert program, Dmitri won top prizes in international piano competitions and participated in music festivals while a student of piano performance at NKU. Music major Anna made her orchestral debut at age 12 and has performed as a solo pianist with several renowned orchestras. They play piano together as the husband-and-wife Shelest Piano Duo.

“Because we cherish a democracy, our students need to be prepared as citizens equipped to stand for and with democracy. Through this benefit concert, we hope to bring awareness to the tragedy occurring in Ukraine and support for a young, democratic nation,” Vaidya said in a welcome speech.

For the Shelests, the event provided an opportunity to experience the rich culture and beauty of Ukraine, which in recent times has only been known to the world through images of war and destruction. Anna believes that music is one of the most powerful ways to communicate this message of joy and hope.

The concert opened with a performance of the Ukrainian National Anthem on violins, viola, cello and double bass by the NKU Student String Quintet.

Following the speeches, the first piano piece for the night was “Overture” to the opera Taras Bulba composed by Mykola Lysenko, who Anna referred to as a Ukrainian national hero and the father of Ukrainian music. The piece incorporated a galloping rhythm evoking Cossack riders and a distinct folk melody.

The second piece, “Dreaming” from Amy Beach’s Four Sketches, Op. 15 started quietly and tenderly, before reaching a dramatic climax and returning to gentleness once more. Afterward was “Hesitation Tango” from Souvenirs, Op. 28 by Samuel Barber, the romantic and playful back-and-forth of which the Shelests performed with gusto.

The fourth piece, Sergiy Bortkevych’s “Folk Melodies and Dances” took listeners through a journey of eclectic moods and sounds, from subdued and somber to fiery and bright. Following was Myroslav Skoryk’s darkly dramatic “Melody,” which according to Dmitri is the most recognizable and most performed piece of music in Ukraine. Here it was played in its original version with Anna on piano and Maddie Pittman on violin.

“Blues: Almost American” from Three Extravagant Dances, Skoryk’s humorous attempts at creating American-sounding music while he lived in the United States, was the sixth piece for the night. The Shelests played energetically, creating an enormous wall of sound in the process.

“Rhapsody in Blue” by George Gershwin, one of the best known and quintessential musical works by an American composer, concluded the piano performances. The rapid and continuous movement of the piece meant that the Shelests applied themselves wholly to playing, often extending their reach as they ran the piano’s entire length.

Immediately after the last note rang out and the players lifted their hands from the keys, the audience erupted in roaring applause and gave a standing ovation.

“It was beautiful,” said Amra Gosto, an audience member. “This is the first time we’ve seen them play and they are amazing.”

Members of the NKU Chamber Choir then came on stage to perform “A Ukrainian Prayer” by John Rutter, a quiet and solemn ending to a night of music.

For Anna and Dmitri, who have their home in both Ukraine and the United States, the program holds a personal meaning. Though they have been living in the U.S. for over 20 years, they are still deeply connected to their family, relatives and friends in Ukraine. Anna describes the war in Ukraine as surreal, something that one could never imagine happening in real life.

“It’s very strange how you have to adjust and understand that your family is in constant danger, and they are finding strength to go on and finding normalcy in this situation. We try to support them any way we can,” Anna said before the concert.

As the war is still ongoing and as more Ukrainians continue to flee their devastated homes, Anna added that more needs to be done to support refugees, including government programs and concrete plans for refugees who come to the U.S.

“Those Ukrainians who have been coming to Northern Kentucky, it will be a wonderful community here that can welcome them,” Anna said, referring to her and Dmitri’s positive experience as immigrants in Northern Kentucky. “But I think the question is how to actually get to the United States. This process, it’s quite challenging … The laws need to be changed to be more democratic, channels need to be opened so people can get to safety.”

Dmitri is appreciative of the support that immigrants have received from the U.S. At the concert, taking place in a nearly full Greaves Concert Hall, it was moving for him to witness the outpouring of support for Ukraine and its people.

“The amount of support that’s coming from Americans and various immigrant groups in the U.S., Ukrainian and beyond, have been absolutely overwhelming,” Dmitri said. “People of the United States have a long history and a long-standing reputation as being some of the absolute most generous people who support everyone in need that they’re aware of.”