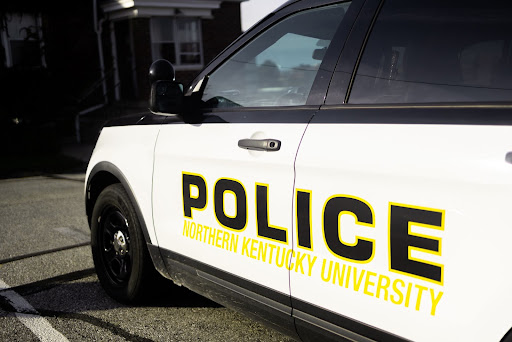 With a rise in school shootings across the nation, Chief of Police John Gaffin assures students that “school is one of the safest places you can be.”

Since the beginning of the school year, the number of gunfire incidents on school grounds has nearly doubled in cases, from 16 through the first six weeks of school in 2019, to now 30 in 2021 according to Newsweek.com. This rise has caused tremendous anxiety across the United States and has left some students on edge.

Gaffin believes that this rise in incidents is partly related to “built up tension” from being cooped up during the pandemic and not having any way to express it.

Gaffin has been a member of the University Police since 2005 after completing an undergraduate degree in Political Sciences at NKU.

“I’ve been around the campus a little while,” Gaffin said.

Gaffin has been a member of the community and wants to protect the people to the best of his and his forces’ ability.

Gaffin explained that the NKU police department takes the issue seriously, but also wants to reassure students that the possibility of this happening at NKU is slim. In 2019 there were 29 active shootings in the U.S. with 28 in educational settings and only one took place at a university, according to numbers released by the Federal Bureau of Investigation.

“We feel like it’s an ever present threat … and these events get a lot of attention, but that leads us to believe they are more frequent than they are,” Gaffin said.

There are roughly 5,300 universities in the U.S. and the likelihood of a shooting to happen on campus is about .09 percent  .

Even though the odds are unlikely, students still have anxiety about potential threats. According to Gaffin, there are several things that students can do to ease their mind.

Run Fight Hide training is a University Police sponsored program where students and other members of the community can sign up to learn what to do in case of emergency events.

“That’s one of the roles that we relish in as educators,” Gaffin said about the importance of participating in one of these training sessions. “It might save their lives one day.”

To get a better understanding of how well prepared the police force is on top of what students can do, Gaffin said, “Our organization has changed a lot. We look for the right fit more than anything else.”

Gaffin explained that the force that’s been established for the university is hand selected and not graded by experience but more by their ability to “leave the interaction with the student thinking ‘wow, that was a great interaction.’”

The University Police go through several trainings a year and even have tests throughout the year to make sure each individual officer is prepared and ready to go.

Recently in the U.S., people have been raising questions towards the reliability of police officers. Students coming to NKU may have some hesitancy in trusting the University Police.

“Give us a chance. If I could say anything to someone who grew up with bad interactions with police, give us a chance,” Gaffin said. The University Police have taken an oath to protect their community and have on their homepage “To protect, serve, and educate.”