As he prepares for retirement, Leo Calderón and others look back at his impact on the NKU community 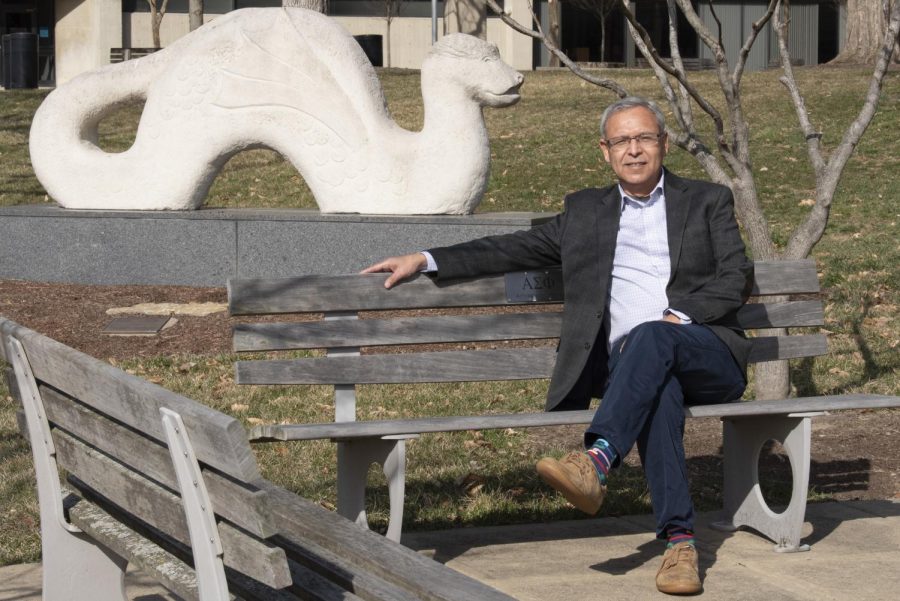 Leo Calderón poses for a photo on NKU's campus. Calderón has served as the Director of Latino Student Initiatives for the past 35 years.

Leo Calderón assists students with whatever problems they have, be it paperwork or money for gas. He attends protests and rallies. He plays soccer and coaches his grandson in the sport. He buys coffee for everyone in his office. And he is going to retire on Jan. 1, 2022, after 35 years as Director of Latino Student Initiatives at Northern Kentucky University.

“There’s a time when it’s great to go ahead and move on,” Calderón said. “Doesn’t necessarily mean that it’s the end of my career. I’m planning to keep busy in the community and do other things that I’ve always wanted to do.”

Calderón has been with the Latino Student Initiatives, formerly Latino Programs and Services, since its foundation in the spring of 2001. Under the tenure of NKU President James Vortruba, the office was established with the help of Dr. Greg Stuart, assistant to the vice president of student engagement.

“How many universities do you know that have a Latino student initiatives office?” Calderón asked. “We do have one at NKU, and we began twenty years ago serving 57 self-reported Latino students.”

According to Calderón, that number is now over 600. They include students born in the U.S., permanent residents, undocumented immigrants and DACA recipients, referring to the Deferred Action for Childhood Arrivals federal program.

“Over the years, the community learned that NKU is a friendly destination for those who want to pursue higher education, and having bilingual, culturally competent individuals working in the office is critical to that success,” Calderón said.

He recalled a Latino college fair at the Su Casa Hispanic Center in Cincinnati where he invited several universities from the Northern Kentucky-Greater Cincinnati region to attend. When the admission counselors from those universities arrived, they had no representatives that could speak Spanish.

“People may say, ‘That doesn’t matter, because the students who are coming to NKU are fluent in English, and they have to be fluent in English or they take the English classes at NKU,’” Calderón said. “But their parents, and some of these students, may not be fluent in English. That’s why I think that higher education has not met the needs of our students. There’s a lot of work to be done with identifying bilingual staff members and administrators to better serve that growing community.”

For Calderón, responding to the needs of emergent and marginalized communities is especially important. Brought from Mexico to Chicago at the age of nine or ten, he grew up in a predominantly Mexican but ethnically diverse neighborhood where his best friend was a Polish immigrant.

At public grade and high schools, Calderón was an average student with little ambition for higher education. It was his high school mathematics teacher who encouraged him to go to college. He then received a scholarship to attend Thomas More University, where he met his wife and had his first child. While completing a master’s degree in Public Administration at NKU, he began to work as executive assistant to Dr. Leon Boothe, NKU President from 1983 to 1996.

“What does that mean that we’re not teaching the wonderful stories of so many people who’ve made an impact on the community?” Calderón asked, incredulous that someone would not know who Cesar Chavez is. “Why do we want to go and teach that? So we can influence the next generation … and make them believe that they could also do it.”

Calderón established the Latino Mentor Program (LAMP) in 2008 in partnership with Kroger based on an existing model by NKU R.O.C.K.S., a signature program by the African American Student Initiatives. He realized that there is a strong correlation between student engagement and retention, as well as between engagement and graduation.

At the end of the year, a celebration is held to honor the students and their accomplishments. The event recognizes a distinguished Latino mentor and mentee, students with the highest GPAs from each college, students with GPAs of 3.5 and above, graduates and scholarship recipients.

For Natalia Lerzundi, a Political Science alumna who is now coordinating LAMP, the program had a great impact on her college career.

“Through LAMP I met a lot of people that are now super close to me, and I made really great connections. I had a huge support system throughout my time at NKU,” Lerzundi said.

Both Calderón and Irene Encarnación, Spanish professor at NKU, emphasized the importance of community connections.

“Just the other day, I was not in the office. Bonnie Meyer said, ‘Leo, someone came in and they were asking to see an immigration attorney,’” Calderón recalled. “Those are the kinds of needs that they come and ask you for. That’s why building trust in the community is so critical, because that’s how you make referrals.”

According to Encarnación, Calderón ensures that students are networked to the larger community and have access to the help they need. By volunteering at a festival, for instance, students get to meet Latino community leaders and become more familiar with the culture. They would then be able to work in a diverse environment and find help when they graduate.

Calderón has organized events and participated in organizations beyond the NKU campus. In 2004 he, Encarnación and Dr. Miriam Kannan, regents professor emeritus in biological sciences at NKU, developed the Fun with Science Camp for Latino grade and high school students in the region.

“We never get Latino students in the sciences,” Kannan said.

This year the camp will take place from July 12 to 16. Due to COVID-19 restrictions, 15 students from the Covington school district will be invited to participate.

Ten to fifteen years ago, Calderón developed an alternative spring break for students in Mexico after realizing students often took the opportunity to study abroad. In partnership with the YMCA, NKU pre-med students worked in a hospital to treat cleft palates. Two or three American students told Kannan that working with children from a different culture was the best experience they had ever had.

Twelve years ago, with a letter from the National Underground Railroad Freedom Center in Cincinnati, Calderón took about 20 students to Quito, Ecuador to open a Freedom Station there. They visited the Trude Sojka Cultural House, a Holocaust memorial house museum dedicated to Kannan’s mother Trude Sojka, an artist and Holocaust survivor, as well as to tolerance and peace.

“There must have been 200 or 300 people that came to the opening,” Calderón said. “This was to promote peace and justice, and to help us better understand that we’re all in this together.”

Calderón is shy in matters regarding himself, but open and dedicated when it comes to everyone else, Kannan said. He is the first Latino member of the Kentucky Board of Education, a member of the Red Cross and Prichard Committee for Academic Excellence, one of the founding members of the Hispanic Chamber of Commerce and the Esperanza Latino Center of Northern Kentucky.

“It seems to me that oftentimes I find myself joining boards and doing things,” Calderón said. “Sometimes I think that’s a hobby, but I enjoy being a part of that and making a difference.”

According to Encarnación, having a representative on such regional boards is crucial for addressing the needs of the Latino community. Calderón influences policies not only through his position on boards and committees but also by attending rallies and tackling policy on a state level.

“He’ll be there right in the middle [of a rally] surrounded by nuns, and they just adore him,” Encarnación said, referring to the different Catholic congregations that the Latino Student Initiatives works with and which advocate for social justice.

Who will succeed Calderón as director is to be determined, but Encarnación said that his successor would have big shoes to fill.

“We need to make sure that the candidate is at a level of experience where they will be able to grow,” Encarnación said. “We usually work with students and the faculty, so we need someone willing to listen. Someone who dares to go to Frankfort and challenge policies there. Someone watching when there could be changes that affect students. We need someone that has the passion.”

Calderón always pushes students to be the best as they can be, Lerzundi said. But his dedication to students sometimes goes beyond advocacy and professional assistance. Encarnación recalled the times when he paid for students’ lunches, gas and books, when he helped a student who got into trouble with the law, when he rescued another student who was stranded in the middle of the road.

“He is giving. He is open to everybody. I don’t feel any intimidated around him,” Kannan said. “He will find a way to help you.”

When asked what he would be doing after his retirement, Calderón said that he would continue to work with Esperanza and the higher education sector, particularly in how the latter can provide effective services to the Latino community. He hoped to see more strategic planning and deliberate objectives when it comes to diversity and inclusiveness in the region.

“What it takes is courage; and not only courage, but to be honest while we’re sitting round the table, and ask ourselves critical questions. Are those questions being asked, I ask? They’re not,” Calderón said. “I wish we would be more determined to make things happen, because I think that if we want to have a vibrant community, we have to go and show it.”

According to Calderón, protocols and strategic plans are needed to truly make change happen. “We need to celebrate it. We need to reaffirm it. We need to quantify it,” he said.

For Lerzundi, it would be intimidating to know what might change. Calderón has been in office for so long and made such an impact that it feels weird to see him go.

But at the end of the day, it is about the students, she said.

“NKU’s special, and what makes it special is the people,” Calderón said. “At the end of the day, you see the impact that we’re having on these students, and that’s what counts, so they keep coming back. In the end, it’s not us, it’s them.”

A gala held on Dec. 4 by the Esperanza Latino Center in the Student Union will celebrate Leo Calderón’s retirement.