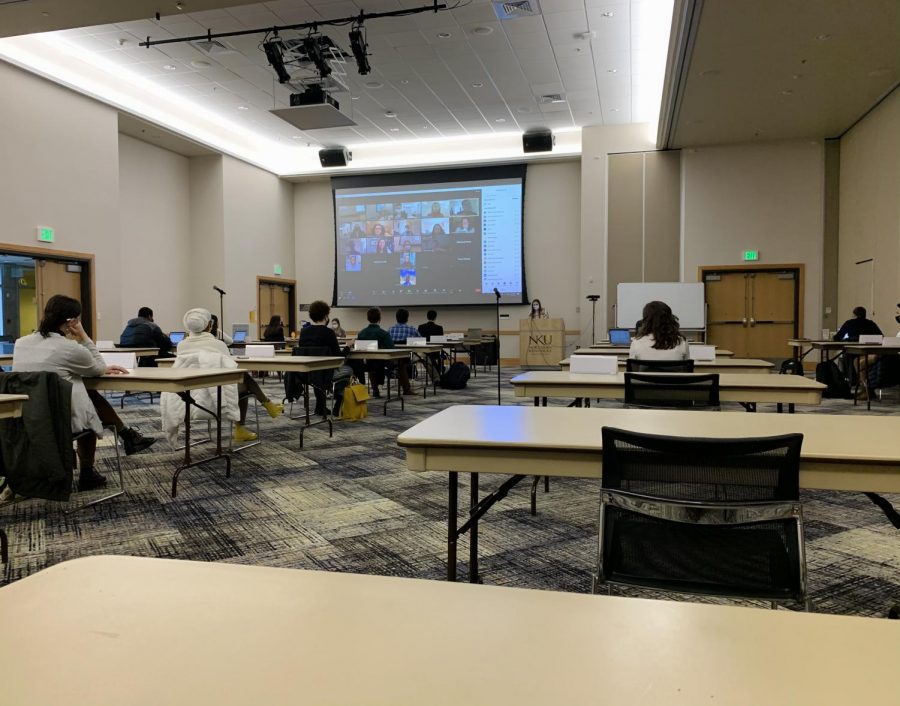 SGA members and visitors have the option to attend meetings virtually or in-person.

“I’m going to briefly address the emails and just say that the allegations made in some of those emails are untrue … regardless, I’m going to continue to uphold my position as the chair of the senate, as a student body president and the student regent and I look forward to serving our peers with you all over the next month that we have left,” Goodwin said.

A motion to adjourn failed and the meeting remained ongoing with discussion of the resignations of four former SGA members.

Senator Jimmy Renton spoke on behalf of emails that he had sent to Goodwin in the past regarding issues that he had been having.

“You were saying that allegations were false, but I’m just going to speak for my email under my perspective real fast … when I came in and joined SGA, I looked up to you, Mia [Derks], Ron [Delgado], Emily [Miller]. I looked up to you all as mentors,” Renton said.

Renton feels that since the failed impeachment of Goodwin, there is a disconnect between himself and current SGA administration.

“I emailed about numerous concerns, different concerns, and I have not gotten replies back from specifically you, Lauren. And what I have a problem with is I was scrutinized, I’m not gonna say who, but it’s somebody in the administration for a resolution idea that was reposed; it was proofread by Senator Abraham and by Senator Sullivan. I was accused of being vindictive,” Renton said.

Renton was interrupted by Arnie Slaughter, assistant vice president for student engagement and dean of students.

“This is not the time for that. If you would like to set up an appointment with me, I would be happy to talk with you. We received your email,” Slaughter said.

Members lined up at the microphones to ask Slaughter questions about the concerns brought up.

“My question is why this is not the time to talk about these concerns that senators and that we have. This is our meeting to discuss our concerns,” Minniefield said.

Slaughter replied by saying that SGA members cannot regurgitate the things that have already happened due to it being a waste of time.

“Us coming to meetings for about 20 minutes to do reports when nobody has reports is also not a good use of our time. We’re renting this space. We pay for this. So, we come here for 20 minutes to talk about nothing; that’s not productive. Jimmy had something he would like to discuss, it should be productive to the space,” Minniefield replied.

Slaughter recommended making an agenda with either himself, a chair member or Goodwin to discuss the issue further.

“We will not have this meeting go off the rails again. We are here to serve our students,” Slaughter said.

Slaughter added that he wants to start hearing ways that SGA can help improve the student body as well as come together as an organization.

“I want to hear ways that this organization can come together and say, ‘You know what, we’ve had differences, we’ve had disagreements.’ What are we going to do to represent students that put you in those chairs? What are you going to do about that? We can’t go back and regurgitate conversations … but what we can do is find ways to best serve your peers,” Slaughter said.

Senator Mohamed Omar spoke next at the microphone.

“Well, first of all, I think it’s one thing to come up here and look at us and say that we need to do our part, we need to work together when our own president is not doing her part in trying to communicate and work with the senators … President Goodwin hasn’t come up to me and had a full conversation with me, she hasn’t tried to get to know me. She hasn’t offered to go over the Constitution and the bylaws—all of the things that the president should be doing,” Omar said.

Omar continued to say that former Chairman of the Student Rights and Advocacy Committee Ronald Delgado was the one that showed him everything he needed to know.

“Instead, a previous chairman was the one who did that. So it’s very unfortunate that that chairman felt that he was talked about behind his back at an e-board meeting by the president when he was the one doing most of the president’s work,” Omar said.

Slaughter replied to Omar by saying that Omar was going back to previous conversations prior to Omar’s arrival as senator in February.

“We’re going back to these conversations because they haven’t been handled yet. You can’t tell us to not look back when the issues that we’ve been looking back at are still not taken care of,” Omar replied.

Slaughter said that he still stands by his stance that members should not be looking back on past issues and that everyone in SGA has the voice and the power to make an impactful change, but to not use their voice to attack one another.

“Well, this is not an attack. We’re trying to figure out what’s going on. If somebody comes to express their concern, then by all means, they have every right to do so. But whenever a student tries to speak, if an advisor or the president shuts it down, then what’s the point of SGA?” Omar asked.

Slaughter said that he was not going to argue back and forth about the discussion and tried moving forward.

“I want you all to focus your energy and your actions and your statements on ways to better this experience for you and your peers,” Slaughter said.

Minniefield spoke again and said that nothing gets done during SGA meetings which is not helping the student body.

“How are we supposed to help them [the student body]? How are we supposed to hear their concerns when our concerns are not being heard here? So, with that being said, we need to do a better job at hearing our senator’s concerns like it’s not productive, because every conversation is productive, every conversation leads to something; even if it feels like it does not, it gets us somewhere,” Minniefield said.

Minniefield added that she feels as if these concerns have been silenced for too long.

“We need transparency in our space, we need people to hear us. We have been silent for too long. We’re not heard here… we can’t even say our peace in this room without being interrupted and met with aggression. So how is our student body supposed to feel comfortable coming to us with their concerns?” Minniefield asked.

Slaughter said that in the three years he has been SGA’s advisor, productivity has been made throughout SGA.

Chairwoman of the Academic Excellence Committee Hannah Miller spoke next about discussing why the four members that resigned felt as if they needed to.

Vice Chairwoman of Student Advocacy Karla Arango spoke about concerns that had been sent out via email to both Chief Justice TJ Cleary and Slaughter involving another impeachment process against Goodwin.

“I just feel like from, I think I had like 12 students mention that to me, and that wasn’t taken care of. So I think that with that and your resignations today, like there’s obviously something very wrong. And I just want to encourage everyone that’s on Zoom and in this room to not resign, because I honestly think that the administration’s gonna like that a lot more than if you just stay here and continue to fight,” Arango said.

Senator Aliya Cannon added that SGA needs to become more productive with the time that they have left with the current administration.

“If Lauren’s president, Lauren’s president, that’s what it is, but us going back and forth, it’s not going to help the situation and then on top of that, with our structure right now, we really need to work on our internal well-being… so maybe if we started building relationships and talking to one another, maybe our meetings could be more productive,” Cannon said.

Renton was then granted the opportunity to speak about the issues that he had addressed at the beginning of the meeting.

“Before the impeachment, you [Goodwin] responded to my emails. Since then, I’ve reached out to you on numerous issues. You haven’t responded. How are you going to make sure for the rest of your administration that you’re being responsive to senators?” Renton asked.

Goodwin replied that since the impeachment trial, she has gathered that one of the complaints is that she has overstepped her role as president.

“So when you respond to me about organizational things, I will respond. When you email me about resolution ideas, that is not under my purview, and I do not want to overstep my role again because I was told I did at the beginning. So that is when I will be responding and when I’m not,” Goodwin replied.

Lynn Warner, a teaching and learning librarian and faculty senator for Steely Library, was a guest speaker at today’s meeting.

Goodwin said that applications to fill Delgado’s spot will come out sometime tomorrow.

Goodwin told The Northerner that she had no further commentary regarding the resignations and email allegations.

The meeting was then adjourned.