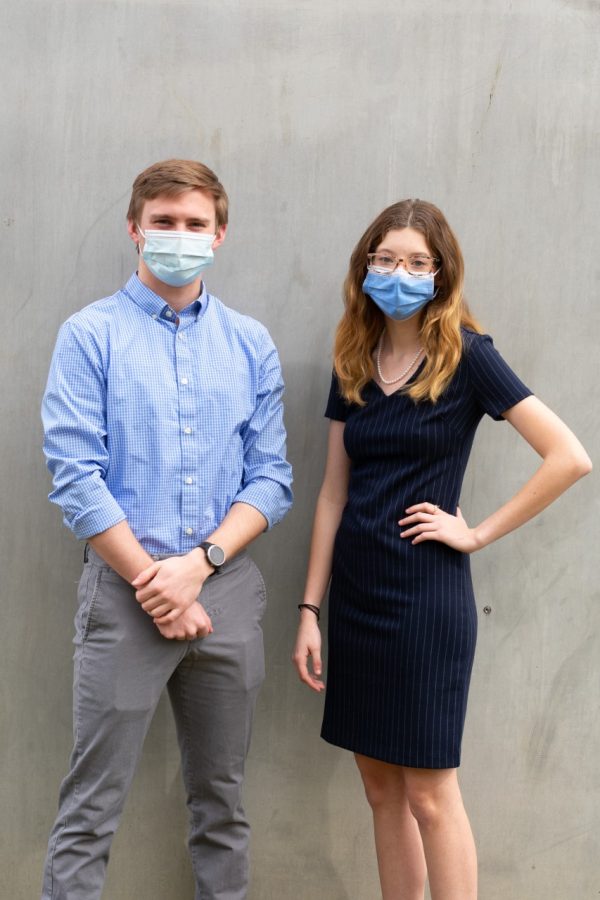 Jackson Coates and Rebecca Noel are running for SGA president and vice president for the upcoming academic year.

Jackson Coates and Rebecca Noel are running for SGA president and vice president for the 2021-2022 academic year.

Jackson Coates is a junior biology major with minors in chemistry and honors. Coates is currently involved in NKU’s track and field, is a leadership mentor and was involved in the Service Leadership Committee as a freshman.

Coates said his involvement throughout NKU has strengthened his leadership skills.

“[Service Leadership Committee] played a big role in kind of fostering my passion for service which you may know or may not that a big part of our campaign is trying to bring a service community to NKU,” Coates said.

Rebecca Noel is a junior anthropology major with minors in international studies, honors and criminalistics. She served in SGA previously as a senator and then as part of the Academic Affairs Committee where she was able to pass a successful resolution that then got turned into the COVID-19 student emergency fund this past year. She also served in SGA as the Vice Chair for Academic Affairs but had to leave SGA due to schedule interference.

Noel said that being an RA has been an opportunity that has helped her most thus far.

“That experience is what has given me the most opportunity to work with other students on campus who I might not have been that exposed to or might not have had the opportunity to work with, so it’s helped me really see the diversity that does exist on campus and the ways that these people can come together and make something really awesome,” Noel said.

Their goals and platform

There are five pillars to their candidacy: expanding SGA to be representative of all students; increasing student access to different resources on campus; building a community of service and empathy; restoring university life after the pandemic and sustainability across campus.

Coates said that their solution for SGA to be representative of all students is to create a suggestion box that is easily available on the front page of NKU’s website to ensure that student’s voices are being heard.

“Any student that has something they want that needs to be heard by us can get it to us in that way,” Coates said.

“So if we’re putting on an event that either some group has expertise in or would be affected by this change or event, we want to partner with them to make sure that we’re putting together an event as effectively as possible. And that’s something that’s kind of missing from this year … [SGA] has become almost its own isolated organization, which we know is not the function of any government,” Coates added.

Noel said that increasing student access to different resources on campus will overall help the student body and better student’s experiences on campus, such as financial aid, career services and the health and wellness office.

“All of these places exist for the sole purpose of helping students and bettering their experiences on campus, and they have a lot of different resources that people can take advantage of but aren’t necessarily being utilized to the full ability that they have to offer to students,” Noel said.

Noel added that together they want to create a mentorship program accessible by all students and graduate students to give them every opportunity possible.

“We do recognize that there are organizations that have specific mentorship programs and they’ve been very successful and very beneficial to the students they cater to, and we want to open up this opportunity for all students,” Noel said.

Building a community of service and empathy is something Coates believes to be crucial to NKU, especially right now.

“So, one thing that was obvious to us after the disgusting incident with the rock [the white supremacist graffiti on campus] is that they really put a spotlight on kind of the fact that we need a culture change in NKU and just within the students of the way that we perceive things and act accordingly,” Coates said.

Coates wants to start building a new kind of culture and community by fostering a community of service throughout campus.

“We want to start with weekly to bi-weekly service projects, either at NKU or our surrounding communities that involve as many organizations and individuals as possible. It’d be very comprehensive in its planning and then very widely advertised since all organizations are involved,” Coates said.

Coates added that he hopes that the service projects will help improve student involvement within the NKU community.

“We hope that this kind of new service and empathetic community could be something that is unique to NKU because we don’t know if it exists anywhere else and maybe that’s something that would attract people to the university of being able to really get involved in the community and with your fellow NKU students to make a positive impact,” Coates said.

Noel said that to get NKU back to normal, the first thing that must be done is getting classes in-person.

“We’ve been online for about a year now and it is very clear that this structure that is in place right now is not working for a lot of students; people are struggling with classes, they’re less involved, they’re not engaged and retention is not great,” she said.

Noel believes that giving organizations and people the support they need during the pandemic is one of the necessary steps to be taken in order to ensure that campus will be back to normal next semester.

“So the best thing we can do is be open and receptive to the needs of the community and listen to people when they tell us what they need and what they are struggling with. For organizations, this can be through promoting different events or different financial opportunities next year, and for individuals, this can look like promoting the emergency fund and doing whatever we can to ensure that everyone goes on an individual level and is receiving all the support that they can during this time,” Noel said.

Coates wants sustainability to be another goal of their campaign due to the overuse of single-use plastics.

“We’re pretty excited about it because it’s not really something that’s been tackled on a wide scale by past administration … so the first thing we want to do is advocating for the discontinuation of single-use plastics,” Coates said.

Food waste is another issue that Coates said is very prevalent across campus, and he believes that adding compost bins on campus can solve this issue.

“We want to set up composting bins across campus so that if people don’t finish what they’re eating, they can put it in a compost bin to put it towards something productive rather than towards the landfill,” he said.

Coates mentioned adding another community garden where more compost bins can be found on campus.

“NKU has got a lot of green space outside the Science Center which seems like a fitting place to put it [community garden]. Obviously, we want to work with administration to make that happen,” Coates said.

Coates said he and Noel are different from the other candidates because they want to implement changes that can become achievable.

“We’ve settled our goals to have tangible steps toward progress is something that we feel does set us apart from the competitors … these are our promises, this is exactly how we’re going to do it. We feel like that’s a big strong suit of our campaign,” Coates said.

Noel added that both her and Coates’ experiences on and off campus have made them fit to become SGA president and vice president.

“We reach a wide variety of audiences; we can connect with them, like experiences that we share with them and we’re open to hearing from people who have different experiences that neither of us have had the opportunity to have. We just really care about the betterment of this university and we recognize that NKU is great, but it is lacking in a lot of areas and there are a lot of things that we can do to not only bring about new change, but build upon the work and changes already in progress,” Noel said.