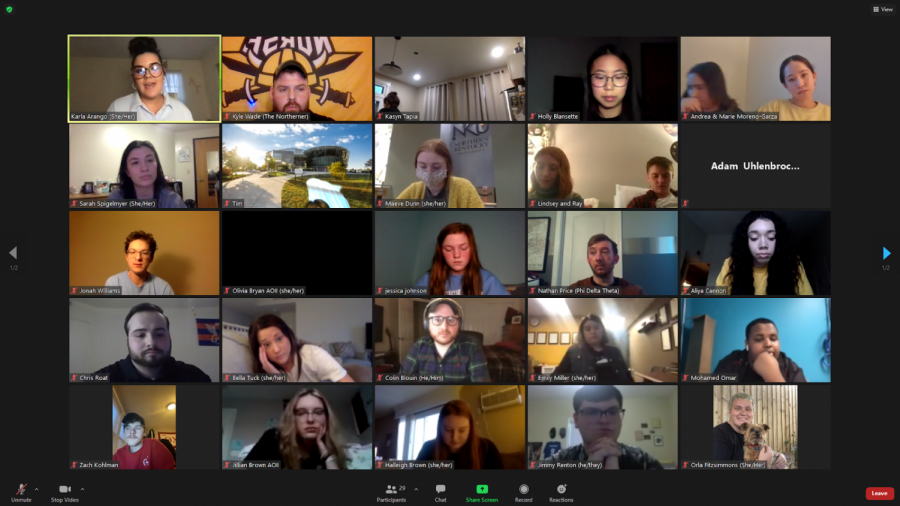 GUIDE hosted a town hall last night to discuss issues such as safety and discrimination on campus.

Last night, G.U.I.D.E (Greeks United for Inclusivity, Diversity and Equity) hosted a virtual town hall via Zoom in an effort “to discuss issues real students are experiencing on our campus,” according to GUIDE’s Instagram.

The town hall was open to all NKU students and was hosted by GUIDE president, Karla Arango. According to Arango, the main theme was “accountability and what accountability looks like on various scales.”

There were over 30 Norse in attendance—most affiliated with NKU’s Greek community, some not.

“Over the last two weeks I’ve had a couple of different women reach out to me asking to set up standards meetings with me to discuss some things that they’ve overheard.” Bryan said. Although Bryan hasn’t gathered all of the details regarding the incidents, they involve other sorority members making discriminatory jokes.

Arango provided guidance on the topic, saying that this is a big issue that faces the Greek community.

“Whether it’s one sister that is guilty of being discriminatory towards anyone or making anyone feel unvalued or unsafe in your chapter, I think by taking action you can set that precedent.” Arango said. According to Arango,  once an anti-discrimination precedent is set within an organization, it tends to trickle down and become a part of the organization’s culture.

Jillian Brown, freshman and Alpha Omicron Pi assistant vice president of membership recruitment, said that when recruiting for any NKU organization it is important to make it clear that hate will not be tolerated.

“It’s important to be clear that no matter where you stand on any spectrum, you will be safe with us, there is not a place for hate in our organization,” Brown said.

President of Sunrise Movement and music education major Jimmy Renton followed Bryan in the town hall conversation, acknowledging that their organization needs diversification. Renton spoke about their issue, “Right now it’s mostly white, like, it’s all white people and I don’t like that. I want to have a diverse club that reflects NKU.”

NOVA (Noble Outstanding Valiant Ambitious, a multicultural sorority interest group) president, Holly Blansette, advised Renton that their organization should focus on an “authentic” approach opposed to seeking out members to “check a box.” Blansette said that multiple organizations have approached her offering high positions because of her race and gender, she calls this “tokenism.”

“Right now I’m in a position where I’m reconsidering a few positions that I’m in, mainly because I’m not sure if I was selected for those positions because I qualify or simply because I’m Black,” Omar said.

The conversation moved onto another issue: NKU’s Greek communities sharing information regarding Black History Month events in lieu of attending them. Arango directed a comment directly to the Greek members of the town hall, “You guys did not show out the way you should have for Black History Month and you guys are aware of that … myself included, I did not show up for them as much as I would like to and I can take ownership for that.”

The floor opened up, and Arango prompted conversation by asking how the town hall feels about NKU’s efforts to cultivate a community of belonging.

“I believe that history has been repeating itself at NKU, and I believe that the repetition is starting to be broken, it is starting to be derailed. President Vaidya is basically trying to deconstruct the dysfunction that has been building up for so many years,” Cannon said. She believes that NKU is making crucial leadership changes that benefit inclusion and diversity such as the appointment of Vice President of Student Affairs Eddie Howard. According to Cannon, these efforts will allow Norse to “create our new legacy, our own legacy,” one that she says “can repeat in a great way and creates a great experience for the Norse Nation.”

Renton agreed with Cannon on NKU’s progress but said they’re still affected by some of the dysfunction that Cannon spoke about.

“I’m trying not to let emotions get to me, I moved off of campus after everything happened with Patriot Front,” Renton said. “By the way, I’m a white person saying this, I’m an openly gay person. Living on campus, I didn’t feel safe knowing that there were white supremacists canvassing our campus.”

Although emotional about NKU’s reactions to recent events such as hate speech, Renton said he holds hope that campus will become the great experience that Cannon had spoken about.

The GUIDE Town Hall concluded with a self-proclaimed “controversial, yet brave” statement from Arango encouraging continuation of the discussion.

“Although GUIDE is Greeks United, if you are not in a greek organization, still come to GUIDE meetings. Your all’s voices are so valued. You guys have so much that we need to not only implement into our own community, but all organizations campus wide,” Arango said.

Following conclusion, the floor was handed over to SGA Presidential and Vice Presidential candidates, Aliya Cannon and social studies education major Chris Roat, for a special presentation entailing their platform for the upcoming election, voting takes place on March 24 and 25.