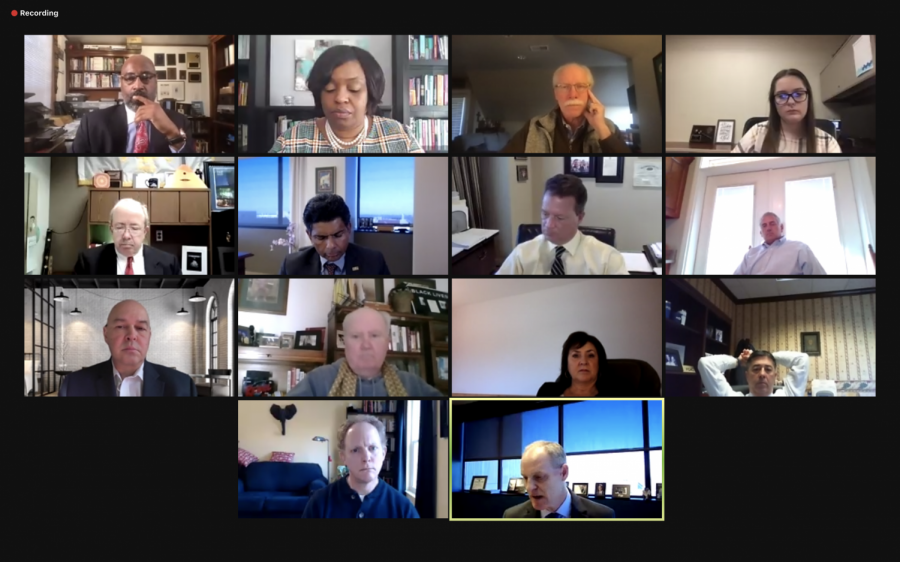 The Board of Regents convened virtually in compliance with COVID-19 safety recommendations.

In its first meeting of the 2021 spring semester, the Board of Regents honored President Emeritus James Votruba, provided health and educational updates and approved of a bond sale resolution.

Chief Financial Officer Michael Hales presented a presidential recommendation to the board that will support NKU’s exit from the Kentucky Retirement Systems.

“In order for us to pay off the liability that incurs, this resolution gives the authorization to proceed with a bond issuance of up to $320 million for a 30-year taxable issuance,” Hales said.

Though the bond covers up to $320 million, Hales expects the actual amount will be approximately $280 million. However, the additional allocation will give the university “appropriate flexibility.”

According to Hales, NKU has formed work groups and continues to participate in several meetings with investors and legislators in preparation for this issuance recommendation.

Hales said NKU will receive the final obligation of costs from KERS by January 2022.

“We don’t expect that to be a significant amount based on discussions with our actuaries,” Hales said. “But whatever that amount is, we then will have the option of either a second issuance of a small amount or we could also have other financing options. Or if it’s not a significant amount, it may even be that we could pay out of cash out of deposition.”

The initial issuance is expected to arrive in early March of this year.

The board passed President Ashish Vaidya’s recommendation nearly unanimously with one abstention.

NKU’s search for a new provost and executive vice president for academic affairs continues, according to Vaidya. Two candidates have participated in open forums with the campus and another candidate is scheduled for further interviews. Interviews should be finished by early February and a selection will be made soon after.

Last year, NKU was placed under warning for the failure of two components—general education outcome assessment and library information and learning resources—by The Southern Association of Colleges and Schools Commission on Colleges. NKU was required to address these concerns and send in a detailed report by Fall 2020.

According to Vaidya, the SACSCOC board of trustees reaffirmed NKU’s 10-year accreditation, which will be up for renewal in 2029.

Vaidya also explained that NKU will begin administering COVID-19 vaccinations to community members who meet the requirements set by Kentucky’s vaccination plan. These requirements are set to change as Kentucky’s plan moves forward through different phases.

NKU’s Spring Forward 2021 plan was also briefly mentioned by Vaidya. In part, the plan suspends counseling and parking garage fees for students throughout this semester.

“We will also maintain campus traditions such as homecoming in different but safe formats,” Vaidya said.

President Vaidya opened his presidential comments by congratulating Dr. James Votruba on his recent retirement and professional distinctions earned at the university level and NKU’s College of Education.

Votruba is NKU’s third and longest serving president. During his tenure, the Hale US Bank College of Business and the College of informatics were created, annual enrollment increased by over 3,000 students annually, and several distinctions were earned by NKU’s academic and athletic programs.

Votruba joined the Board of Regents meeting to deliver a speech about his past involvement with NKU and its future.

“Over the past 24 years, NKU has given me the opportunity to engage in the most consequential and satisfying work of my life,” Votruba said.

Votruba extended his gratitude toward the regents, past and present, that have been a valuable resource, and he demonstrated his admiration for the leaders of the campus community.

“For nearly a quarter century, I’ve never failed to be inspired by the courage and commitment of those who give life to our mission in NKU,” Votruba said. “This has been a collective endeavor, and I’ve been honored to play a role.”

Votruba also touched on NKU’s present and future challenges, which have only grown since his tenure in administration.

“Our university, like all of American higher education, confronts challenges the likes of which I’ve never seen in my 50 years,” Votruba said. “But it seems to me that times like these call on us to honor our past without being a prisoner of it. The times also call on us to not become so consumed with our challenges that we fail to see the opportunities before us.”

After a brief executive session, the Board of Regents adjourned the meeting.