‘It’s all about trying to adapt’: professors prepare for the unknown this semester 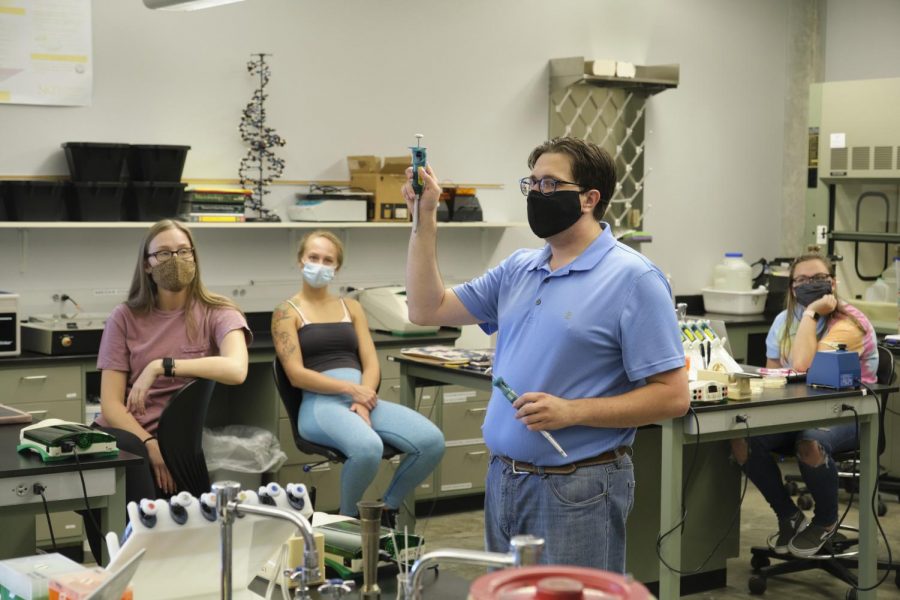 Assistant Professor Brian Carlson goes over a mock pipette demonstration with the class.

While NKU has mostly transitioned to an online format this semester, some knowledge can’t be learned through a computer screen. As some students return for in-person classes, professors are preparing for the unknown with tiny printing presses, tidy pipettors and tenacious persistence.

According to Provost Sue Ott Rowlands, 55% of classes at NKU have transitioned to an entirely online format while the remaining 45% features hybrid teaching.

The administration felt that the region was safe enough to proceed with some in-person elements in certain circumstances, Rowlands said. For example, incoming freshmen and graduating seniors were given the option to have as many in-person classes as possible.

Rowlands also described certain classes in STEM fields and the arts as a “priority” to retain at least some element of hands-on learning in a controlled, safe environment.

One of those classes is Genetics, taught by Assistant Professor Brian Carlson. This is Carlson’s first semester at NKU, and he said he’s spent most of the summer acclimating to campus and preparing the course material.

Traditionally, the genetics class holds 48 students, which is divided into two sections, where students would go Wednesday and Friday to complete lab work. Four people would work at each bench.

The traditional format does not comply with social distancing requirements, so Carlson worked with the lab staff over the summer to adjust the curriculum. Now, only two people work at a singular bench, sitting diagonally from each other. Lab tools are restricted to individual use.

After conferences with the lab staff, Carlson also decided to cut the course material in half so that the labs will follow each other more smoothly.

Though the curriculum has shifted, Carlson said he was glad his class will still have lab activities.

According to Carlson, learning how to use the tools and techniques is just as important as learning about genomes.

“When you have students on campus, they’re on about as equal footing as you could get them, recognizing that everybody has different obstacles in the way or come from different backgrounds,” Carlson said. “When you don’t have everyone together, you have to go down the rabbit hole alone.”

The genetics course also features lectures, but those are delivered in an online format that students watch remotely.

“For me, it’s the most responsible thing to do from both an educational perspective and from a public health perspective,” Carlson said.

Lecturer Randel Plowman has been teaching Printmaking since 2015, but it had never been in an online format until the last few weeks of the Spring 2020 semester.

“Teaching printmaking online is a little harder. It’s all hands on,” Plowman said. “In the print studio, there’s a lot of equipment, like the printing presses, that students are using, which they can’t use at home.”

According to Plowman, he initially felt out of his element. Prior to this experience, he didn’t use Canvas that often.

“That was a little daunting because I wasn’t really prepared,” Plowman said. “I don’t think anyone was.”

According to Rowlands, approximately 450 faculty members took classes with a summer institute to learn how to adjust their teaching styles for more flexible formats and techniques.

Plowman credits his training over the summer to how well he has been able to adjust the curriculum and feel comfortable in his teaching format.

Like Carlson, Plowman also decided to split his normal class size in half. Rather than 16 students meeting at once, eight people rotate in each class session.

“Before, it could get pretty crowded with people trying to move to the press,” Plowman said. “It’s kind of nice to have that much space. Everyone is six feet apart when they’re working and everyone is wearing a mask.”

Several assignments have transitioned to online as well. For example, students would traditionally critique each other’s artwork verbally in class. Now, the critiques are conducted in a discussion board on Canvas.

“I actually like that a little better because sometimes when students didn’t talk in class, they wrote really well,” Plowman said.

According to Plowman, if all classes have to shift to remote learning earlier than anticipated, he will be prepared.

“This semester, if we do go remote, I actually have a 3D printer and I’ve been printing these really tiny printing presses for all the students,” Plowman said. “They work just like a real press, but they’re really tiny.”

Plowman said he has also organized “back up projects” that students can complete at home with little materials necessary.

While many professors have adapted the curriculum, students will still face new challenges.

Because the printmaking class only meets once a week in-person, students are at risk of falling behind quickly if they miss in-person sessions, Plowman said.

Students also might generally struggle with the online portion, according to Lecturer Jay Avenido.

Avenido teaches Anatomy and Physiology I in both online and hybrid formats this semester. Avenido said he has experience with online teaching, so the transition was not difficult for him.

According to Avenido, he said professors should anticipate that some students will struggle with non-traditional classes.

“It’s all about trying to adapt,” Avenido said. “There are some students that don’t like change, but it’s always good to try out something new.”

Avenido recommended students remain in consistent contact with professors to stay on top of their schedule. Carlson and Plowman said they have both encouraged their students to reach out to them if they feel like they are struggling.

Though the beginning of the semester has shown strong promise, some professors said they anticipate unforeseen challenges and additional strain to appear throughout teaching during the COVID-19 pandemic.

Carlson recommended discovering and applying one’s strengths as an educator to broker a balance between safety and education.

“In terms of balancing, it’s just been figuring out where my strengths lie, and then doing the best that I can for my students with the strengths and the time that I have,” Carlson said.