How professors with children are balancing their work, personal life 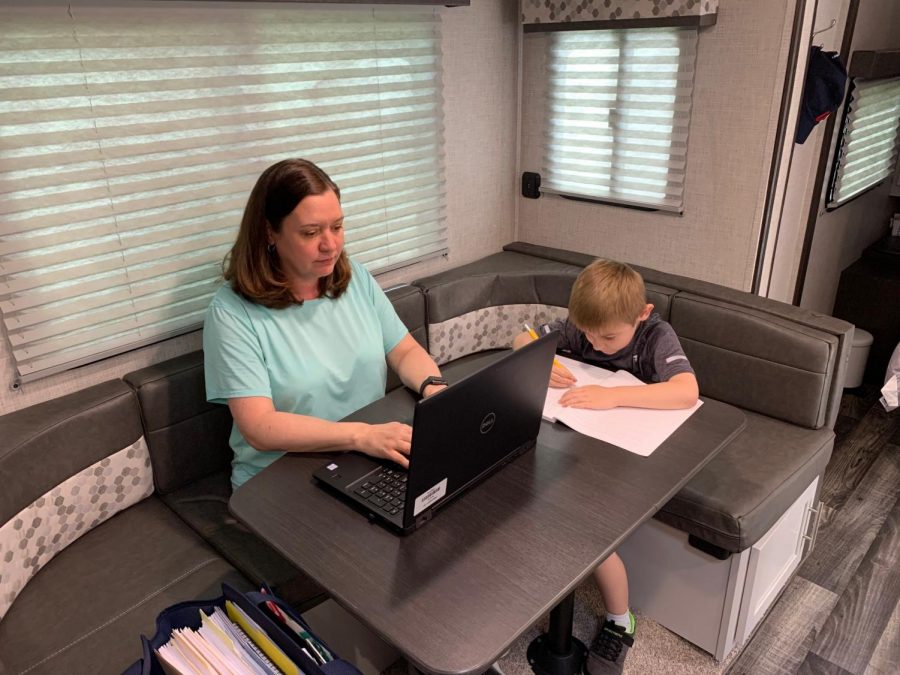 Dr. Jacqueline Emerine and her son working in their converted office trailer.

Courtney McManus
The phone rings for a few seconds before being picked up by Courtney McManus, lecturer and advisor for the Visual Arts Program. In the background, there are the sounds of her three-year-old wrapping up his “lunch time temper tantrum,” according to McManus.

After she asked him to finish eating his noodles and walked to her office, McManus said her initial reaction to NKU deciding to extend spring break and continue the rest of the semester online was a feeling of “overwhelming surprise.”

“For me, for probably everyone I know, it was like generally being stunned … it was super surreal, you didn’t really think that it was going to happen until it happened,” McManus said.

McManus said she then had “a million questions all at once.” Concerns ranged from McManus’ son, who was enrolled in NKU’s Early Childhood Center, to how she would get her students through this.

Having her son at home with her 24/7 while working at the same time is an impossible balance, according to McManus. Her domestic partner, whose job has always been remote, is also working full time and often tries to run interference for her.

“He’s stepping away from his desk, so to speak, and then I am running interference for him and it’s just crazy,” McManus said.

As if on cue, McManus’ son can be heard again in the background. “Can you go talk to daddy please?” McManus asks him.

In the first weeks the university announced its closure, McManus said she realized she needed to create a routine for her son. She tried to make a schedule but soon realized it was useless.

“That calendar is totally useless because my child is in the middle of his threenager rebellion and argues with us about everything,” McManus said.

This impacts McManus and her partner’s ability to get work done. Instead of the usual routine of starting work at 8:30 a.m. and leaving at around 4:30 p.m. or 5 p.m., McManus said she is now “grabbing work whenever she can,” which, in most cases, is throughout the day.

“I’m constantly working from the time I get up in the morning until the time I go to bed at night,” McManus said. “Just to make sure that I get the same amount of work done but I was in my seven hours of the office before.”

McManus said she lives with chronic health issues and often likes to function on a very regular schedule to accommodate those, but that has not been the case lately.

“In addition to the overwhelming anxiety ridden nature of just barely treading water to keep up with the work that I need to do, I know that it sort of started to take an impact on my health,” McManus said, “And that raises the bar because if I get sick I’m going down and I’m going down hard.”

McManus said that knowing it is not a one size fits all situation has helped her keep perspective.

“We are literally in the middle of a global pandemic. And there’s tons of cultural and social trauma happening right now,” McManus said. “We have to be kind to ourselves about what our expectations are.”

McManus said she reminds her students that they are doing more than she could even expect from them and often has to remind herself of the same.“I always just like to say in my moments where I feel like I just cannot do it anymore, ‘I’m enough.’ I’m doing everything I can, and if something falls between the cracks, then that’s what has to happen in order for me to survive,” McManus said. “Because these aren’t normal circumstances. These aren’t standard times. Everything is wrong right now.”
Dr. Jacqueline Emerine
Associate professor of communication Dr. Jacqueline Emerine’s initial reaction to learning that NKU would convert its classes to online was how her students were going to complete a project where they have to go into a public place for two hours and observe behaviors.

Emerine later found out her two children’s schools would also be converting to online education. Emerine’s husband is a middle school teacher. According to Emerine, having both parents be educators has made the transition a little bit easier.

One thing Emerine said she was not prepared for was the amount of work her high school son’s teachers would send home.

“My high schooler gets two assignments per day per class so he has over 60 graded assignments in one week,” Emerine said. “It’s not been fun.”

Emerine said she spends Monday through Friday homeschooling her children and gets her own work done at night and weekends.

“I’m working seven days a week because I’m so focused on homeschooling Monday through Friday that Saturday and Sunday is like the only time that I have to get things done,” Emerine said.

Emerine said she can’t help but worry about her students who have to return to unhealthy environments.

“I always think of my students as my kids and try to help in any way that I can and that feeling of helplessness is really hard,” Emerine said.

As a very organized person, Emerine said she realized the only way this was going to work was if she created a schedule. The schedule includes starting homework at 10 a.m., creative time that is not on a screen, more homework at 2 p.m. and then family activities.

Both of Emerine’s children need to keep on task, she said. Emerine and her husband have been able to trade off with this responsibility when needed.

Emerine converted the family’s travel trailer into an office that she can use to escape the “all kinds of fun noises” of her house.

“That’s the other thing with kids. They don’t ever stop interacting, even if you’re working, so it’s been kind of nice to have the outdoor office that we can go to and actually get things done.”

Technology has been another challenge for Emerine, whose internet can only handle one Zoom meeting at a time. This has proven to be difficult for her family. Her sons have two meetings a week, her husband has three to four and Emerine has quite a few herself given that she’s faculty senate vice president and co-chair of the journalism department.

“That’s been the biggest scheduling challenge is trying to work all of those meetings in and make sure that we only have one scheduled at a time,” Emerine said.

“The unknown means that I don’t know how long this is gonna last,” Emerine said. “ If I knew ‘okay, we are going back to school in the fall on this date’ I can do this for the rest of the semester … but right now it’s so up in the air and so uncertain.”

Emerine’s advice for parents would be to create a schedule that works for you and your family.

“Have breakfast and then have a set time where you’re going to sit down and work on homework and make sure that you are creating space to relax and to watch mindless television, do some cleaning or just kind of have some type of schedule that works for you [so] that you have kind of a goal and a list of things to accomplish that day,” Emerine said.

“Humans are not meant to be isolated so any way that you can find to connect with others is a positive thing,” Emerine said.
Dr. Jonathan Reynolds
Dr. Jonathan Reynolds, regents professor, said that although this transition has been challenging, he is even more privileged than an average tenure late career professor because he is only teaching two courses this semester.

Reynolds said he has never taught a class online before; he essentially had to start from scratch.

I have for years joked that I would either die, retire or quit before I taught it online class,” Reynolds said. “… I’m one of those people who just adores being in the classroom. I don’t think I have ever been unhappy in a classroom as a professor. I just love every minute of it.”

After Reynolds figured out how to utilize Canvas, he said there are some tools he may even use in the future.

“It’s worked really well for a number of students; it was interesting seeing that some students that had not really shown in the first half of the class, really came into their own,” Reynolds said.

Reynolds has two children who are 13 and 15-years-old; both attend Walnut Hills in Cincinnati. He said one of the most difficult parts in regards to their education has been being the point of contact for both of them.

“It definitely is crucial. I’ve discovered that every Monday morning I have to sit down with several different means of communication that the teachers use and that’s one of the challenges. There isn’t a single source of information that teachers use in Cincinnati Public Schools,” Reynolds said.

Reynolds said his daughter did not have any work for a couple weeks on her Schoology page. After emailing her teacher, Reynolds found out the class was actually on Google Classrooms.

Reynolds said that unlike NKU professors, his children’s teachers only had a weekend to prepare their classes for an online format.

“It was really interesting to watch how my children’s instructors responded. Some tried to maintain exactly the same thing—work level—at home that they would have done every day in class. All of a sudden, we just had this mountain of stuff come at us,” Reynolds said.

According to Reynolds, it took about two to three weeks for the workload to settle down and his family to fall into a semi-predictable routine.

Another challenge was making sure that his children stay on top of their work.

“They’re both on the sort of high functioning side of the autism spectrum, so they both, like, got oodles of horsepower,” Reynolds said. “But they have a lot of trouble focusing. My daughter suffers from a huge amount of anxiety, and so keeping them on top of their work has simply been brutal.”

Specifically, Reynolds said his daughter has trouble getting started with her work. After about a half hour cajoling, she will get started, but once she gets started, she is almost always fine.

Reynolds’ son is actually a highschool senior at 15-years-old. Reynolds said his son reassured him to not worry about him because he had his work under control.

Reynolds soon realized this was not the case after receiving an email from his teachers. His son had done most of the work but was having trouble submitting them to his teachers.

Reynolds is still trying to do his research, but writing at home has been proven to be challenging now that “everything happens at home.”

“I’m sitting down, like ‘ah finally’ I get to work on this article for an hour, and somebody walks up and says ‘what’s for lunch, Dad?’” Reynolds said.

Reynolds’ advice is to be organized, though he admits that it’s easier said than done.

“You gotta be on top of what you do every day, at what time,” Reynolds said. “Again, that’s assuming you have the privilege of the time to sit down every monday morning like I do.”

While being organized is important, Reynolds said that it’s important to not obsess over things that cause yourself unnecessary stress.

A personal struggle for Reynolds has been a lack of interaction with people as well as time to himself.

“I’m a really outgoing, extroverted, curious guy. I really like people, but at the same time, I really need some downtime and some alone time. I have not had any of that,” Reynolds said.