Safewave: ‘My goal is to at least save some lives’ 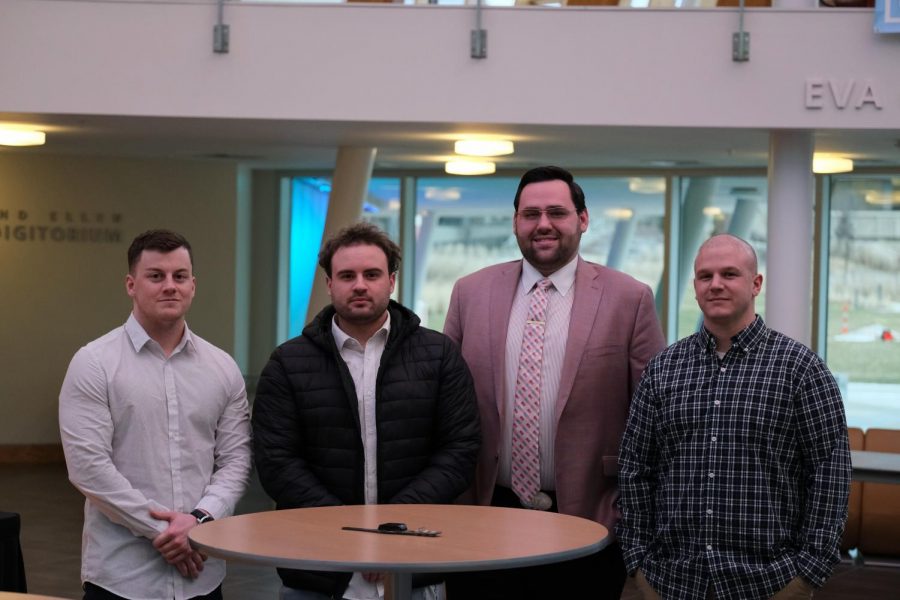 Trevon Bruch, a Northern Kentucky native and INKUBATOR participant, was awoken one night to a fire alarm. It dawned on him that not everyone has the privilege of hearing alarms, intruders or defending themselves if a situation were to occur.

Bruch is hearing. But around 35 million people have self-reported that they are hard of hearing or deaf in the United States alone, according to Gallaudet Research Institute. Out of those 35 million people, nine to 22 people out of 1,000 have severe hearing impairment or are deaf.

Bruch said he wanted to create a device that would effectively alert deaf and hard of hearing people in emergency situations.
Creation of Safewave
From there, the idea of Safewave was born. Bruch looked into safety alarms for deaf and hard of hearing communities and found that there wasn’t much variety in the systems. A lot of systems use flashing lights that pertain to people’s sense of sight. However, Bruch kept asking the question, ‘What if the person is sleeping?’

“I found that all of the safety features for individuals who are hard of hearing or deaf are in the sense of lights flashing,” Bruch said. “The only thing that I could think of that could kind of wake somebody up in a situation like that would be a vibration.”

Bruch realized through research that the type of vibration needed wouldn’t be the typical egg shaker that you find in your Apple Watch or Fitbit.

“We decided to come up with a wearable device that vibrates, that connects to fire alarms and connects to window indoor units,” Bruch said. “If somebody does break in your home, you will be alerted right away. It’s waterproof as well.”

Bruch wants the watch to be used as a security system, notifying the individual outside of their home. The home will be the hub and remain connected to everything inside the home.

Bruch now has a team and is working to patent the technology used in the prototype. The prototype has been tested for sometime now.

I’m a Tech Entrepreneur from Northern Kentucky. I recently created a patent pending wearable device that targets individuals whom are Deaf/HOH.

The Safewave Device was created to alert those whom are Deaf/HOH from possible in-home threats. A retweet can help spread my vision. 🙏🏽 pic.twitter.com/p3VfSkDeTB

How Safewave works
Bruch has a team of four that have been working on this product for almost a year, including Chief Managing Officer Dalton Webster, Chief Operations Officer Jared Gabbard and engineer Brad Herald.

Class of 2016 NKU alum Herald specifically designed the wristbands to have vibrating motors. The wristbands are elevated to create local pressure points to intensify the vibration on the bottom side of the individual’s wrist.

“The peaks of the waves are the only thing that would be touching your wrist and not the valleys of the band,” Herald said.

Safewave Technology, LLC wanted to test the prototype on someone who is hard of hearing or deaf and made a connection with class of 2017 NKU graduate Tyler Stoeckel through a mutual acquaintance.

“We concluded the testing with him being in the deepest stage of sleep,” Herald said. “He wasn’t on monitors or anything like that but based on the average sleep trends, he was in the deepest stages of sleep and the product actually woke him up instantly.”

Safewave is currently going through their pad process phase, which protects its coding from others. The group’s main goal at the moment is the design of the product.

Goals for the product
The team plans to hire people to work with the app who are hard of hearing or deaf. They aim to connect the watch to an app and, within the app, use texting features for security instead of a phone call like typical security systems.

“My goal is to at least save some lives, and make sure that individuals have more peace of mind,” Bruch said.

According to Stoeckel, this is a great opportunity to improve the quality of life for everyone. Stoeckel uses hearing aids for assistance, so this technology gives him the sense of security to sleep without them. The first night the team tested out the band, he said he felt the vibration within seconds.

Stoeckel said he uses one system already that shakes his bed in case of an emergency and feels that is effective. However, that only emits an alert when someone is in bed.

Although Stoeckel currently lives with his parents while finishing his Master’s, he eventually plans to move out.  He and his parents feel assured because of with the product he’s testing.

“I think they felt better knowing that ‘Hey, this could be something that could work,’’ Stoeckel said. “If I’m living on my own, they won’t have to worry about all, ‘You can’t hear somebody that’s at the door, can’t hear the smoke alarm going off.’”

Safewave Technology, LLC still has plans for the future, including a baby monitoring system for parents and a way to gift the product to someone in need.

“One of our big things we’re doing, even when we launch our campaign to raise our money, we’re letting people donate to other people,” Bruch said. “Kickstarter is what we plan on using at first. We’re going to give people the chance to if they aren’t buying it for themselves to actually buy it and donate to a family of need.”