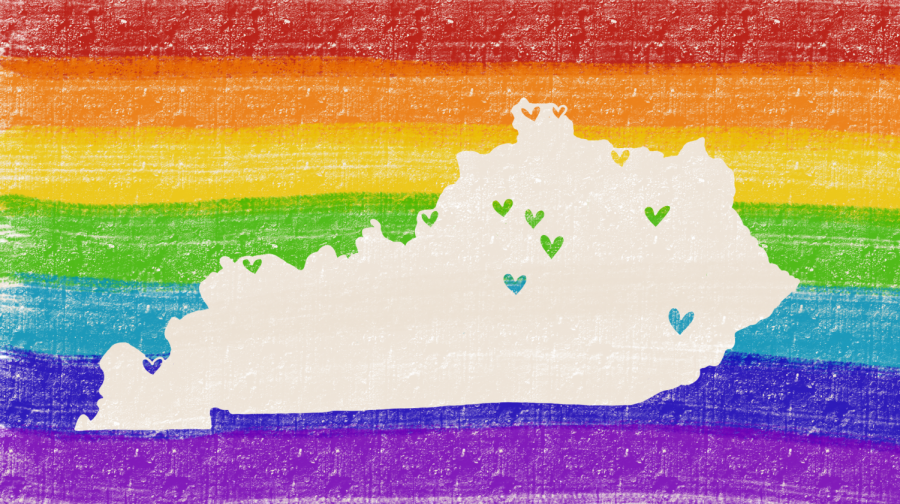 The 17 cities in Kentucky that have enacted Fairness Ordinances.

Even though NKU is a safe haven against discrimination, it is still legal for any reason outside of campus boundaries. This means people can lose their jobs, housing or be denied service because of their religion, race or sexual orientation—essentially, fired for what makes them who they are.

Only 17 of Kentucky’s over 400 cities—along with Woodford County as a whole—have enacted the Fairness Ordinance that prohibits discrimination, according to the Fairness Campaign, a Louisville-based nonprofit organization that lobbies against discrimination based on gender identity and sexual orientation.

“It’s still legal to fire a person, to deny them housing or to refuse accommodation in most states across the country today, including Kentucky. The Fairness ordinance can effectively eliminate discrimination,” Bonnie Meyer, NKU’s director of LGBTQ programs and services, said.

How does the newly appointed governor of Kentucky, Andy Beshear, play into Fairness Awareness?

According to Anna Burt, NKU sophomore and integrative studies major, they don’t believe Beshear can sway cities to pass Fairness Ordinances alone, but they do believe that he will raise awareness, and to them, “that’s a great start.”

“Instead, he would just change [the] subject or make it all about religion. He never faced the troubles that face our community,” Read said.

Beshear’s approach is different than his predecessor’s. During the Democratic primaries, he said in a statement to Kentuckians for the Commonwealth:

“As Attorney General, I’ve been a voice for the voiceless and ensured everyone is equally protected under the law I’ve sworn to uphold … Discrimination is wrong, and I’ll be a governor for every Kentucky resident.”

Jarett Lopez, student body president and a lead ambassador for NKU’s LGBTQ services, said he is excited to move past Bevin, who he said leaned more towards a religious approach and who previously enacted an executive order that effectively removed county clerk’s names from marriage certificates. This move, according to Lopez, was pursued because of religious views on gay marriage.

Lopez also said that Kentucky now has a governor who supports enacting a statewide fairness ordinance, and its ratification would be a welcomed change.

“The patchwork of fairness ordinances we currently have in Kentucky is simply unacceptable,” Lopez said. He helped support the newly appointed Fairness Ordinance in Highland Heights.

Meyer said that raising awareness for a statewide ordinance is important because it would yield an array of benefits for the LGBTQ community.

Lieutenant Governor of Kentucky Jacqueline Coleman made an impact on raising LGBTQ awareness by participating in the 2019 NKY Pride Parade; Meyer said actions like these show support to and raise visibility on issues that impact the LGBTQ community.

According to Meyer, she has seen a bipartisan effort against discrimination when the Fairness Ordinance passed unanimously in Dayton, KY on Aug. 6, 2019.

Meyer hopes that politicians can replicate that effort in Frankfort no matter their party.

“Sometimes we get too focused on the R’s (Republicans), the D’s (Democrats) and the I’s (Independents), but what we’re seeing is more and more people are supporting Fairness and the LGBTQ people,” Meyer said. “A statewide Fairness Ordinance would cover all of us. At that point, the city ordinances would no longer stand.”

Beshear’s top priority may not be dedicated solely to LGBTQ issues but according to Lopez, all issues are LGBTQ because they are in every community.

“Beshear also brings other benefits for the LGBTQ movements—we typically think of marriage issues, bathroom adjustments and other accommodations—Beshear is looking to fix Medicare, which would be huge for my community,” Lopez said.

On his first day in office, Beshear created a new state school board. Read hopes to see this education reform produce “protections for all Kentucky students in the future.”

Read’s main concern: conversion therapy. Conversion therapy is “a range of dangerous and discredited practices that falsely claim to change a person’s sexual orientation or gender identity or expression,” according to the Human Rights Campaign. This practice has been denounced by many organizations worldwide, including both the American Medical and Psychological Associations.

“There’s not a single city in Kentucky that has a ban on conversion therapy being performed on minors,” Meyer said.

Read doesn’t think ending conversion therapy should be limited to just Kentucky, however.

“We want to see everyone treated fairly nationwide. I just [saw] that a transgender legislator was just re-elected, which is super cool,” Read said.

In October 2019, the Supreme Court heard three cases regarding nationwide discrimination based on sexual orientation and gender. A ruling is expected in June—the same month when LGBTQ rights are celebrated.

Read said they are “hopeful, but not too hopeful. My fingers are crossed.”

“This could make for an either really good or bad pride month,” Burt said.

Meyer said that no matter what the ruling was, they would all celebrate Pride Month regardless.