‘That could’ve been me’: NKU reacts to Cincinnati shooting 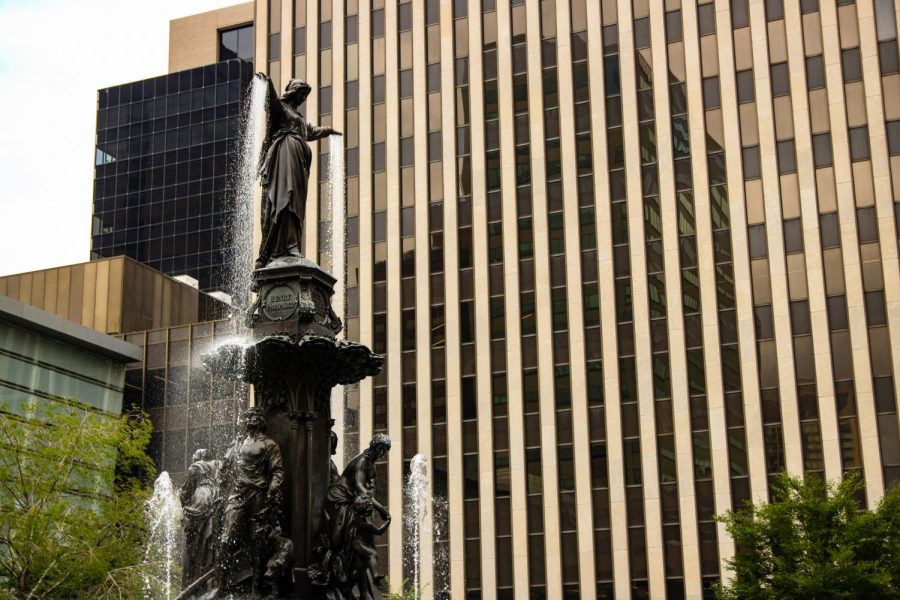 The Tyler Davidson fountain in front of the Fifth Third Center in Downtown Cincinnati.

Senior journalism major Belle Leininger works at Bru Burger Bar in Cincinnati’s Central Business District, on the same block as the Fifth Third Center. But it was far from an ordinary work week.

She remembers seeing images of her building wrapped in yellow police tape. A sudden text from her manager informed her of the closure on Thursday: “The entire building is being treated as a crime scene.”

Returning to work as a bartender after the shooting at the Fifth Third Center, Leininger said things seemed normal again. But the reality of the tragedy lingers.

She didn’t serve her typical, cheerful weekend crowd; instead, she witnessed distressed colleagues comforting each other.

“There was a group of Fifth Third employees that were there hanging out for awhile. You could tell that they had been crying, but they were all smiling and kind of talking upbeat. Kind of like after a funeral, you get together with people and you remember the good times,” Leininger said.

Despite last week’s shooting, Leininger said people still venture out to the square.

“I think people are trying to rally and not let that keep them from going downtown and doing things that they would normally do,” Leininger said.

Cincinnati rocked by shooting
On Sept. 6, a lone gunman opened fire in the Fifth Third Center on Fountain Square shortly after 9 a.m. Police responded to the incident, which lasted less than five minutes, and killed the shooter.

Police confirmed four people were killed, including the gunman. Two people were injured and both are in fair condition. The Cincinnati Enquirer reported that one woman, shot 12 times, has been released from the hospital.

On Sept. 7, thousands came together at a vigil on Fountain Square to honor the victims and to show that Cincinnati is strong. Fifth Third employees, bank executives, city officials, faith ministers and other Cincinnatians embraced and held hands in solidarity.

Other NKU students were downtown when the shots were fired. Business administration major Amanda Schnur called her fiancé as soon as her office on Fourth and Vine Street locked down. She works at law firm Keating, Muething and Klekamp.

Chase Law student McCaela Schreiner, who works in the Kroger building five blocks away from the Fifth Third Center, also said her office was put on lockdown on the day of the shooting.

In an email to campus on Sept. 6, NKU President Dr. Ashish Vaidya urged students or faculty impacted by the shooting to reach out to Health, Counseling & Student Wellness Center at (859) 572-5650 and other available resources.

“I would like to express sympathy and concern for all who have been affected by this tragedy.  It is our hope that our campus community, along with their family and friends, are safe,” Vaidya wrote in the email.
‘That could have been me’
Jasmyn Browder, freshman elementary education major, also emphasized the community impact that this tragedy holds.

“It just hit home; that was really close. It’s even closer now and it can really just happen to you any time,” Browder said.

The idea of the shooting becoming a community issue, Browder said, further encourages her to be aware of her surroundings, even on NKU’s campus.

“I don’t think it would be hard for anyone to get on this campus and do something at all.”

Vaidya said in his email that NKU’s campus security is a top priority and encouraged the community to report suspicious behavior to the NKU Police immediately.

“We all play a role in maintaining our personal and campus safety,” Vaidya said. “Please do not hesitate to reach out to NKU Police with any security or safety concerns you may have.”