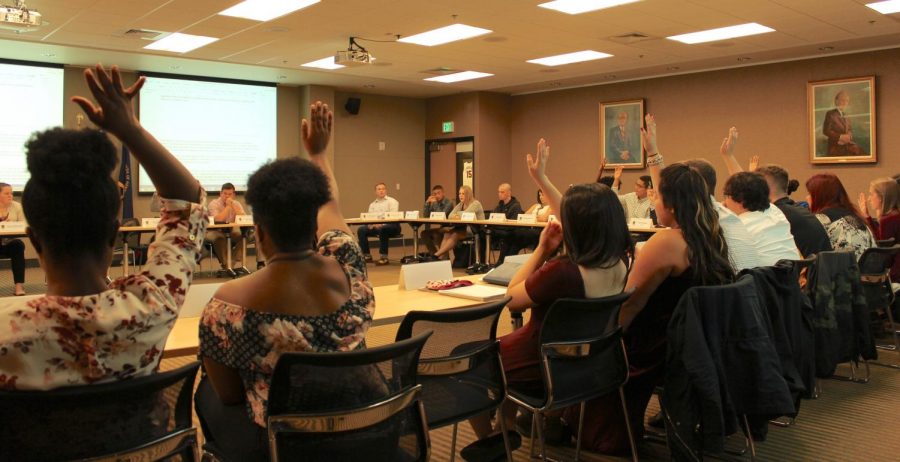 The Student Government Association passed a resolution for solidarity with DACA recipients at their meeting on Oct. 23.

SGA Resolution 2017-2018.001 aims to establish NKU “as a safe community which fosters a positive learning environment and protects the rights and privacy of students on campus.”

Deferred Action of Childhood Arrivals (DACA) was a 2012 federal immigration policy which granted work permits to and stalled deportation of undocumented people that came to the U.S. as children. SGA’s resolution is in response to Pres. Donald Trump’s Sept. 5 recission of DACA and his call for Congress to pass permanent immigration reform.

“The first step to a long process”

“This was the students calling out, saying we really, really think that we should protect our DACA students,” Sologuren said. “We really think that our students mean something on this campus, so you all need to understand that, too.”

Sologuren said she wants to create an SGA committee made up of representatives from LAMP, international students and DACA recipients in order to have their concerns voiced.

“The committee could clarify what the issues were, and we could make a resolution about the plans they should take,” Sologuren said.

The deadline to take next steps is March 5, the same deadline Trump gave Congress to set up permanent immigration reform.

“On March 5, we will honestly see where NKU stands. We’ll see,” Sologuren said. “I think the students did their jobs today, though.”

Resolution 2017-2018.001 will be presented on Nov. 20 to the NKU Faculty Senate, which approved a similar solidarity statement at its March 27 meeting. If the Faculty Senate votes to take further action, the issue will go to upper-administration for consideration.

Sandra Oñate, a mentor for the Latino Mentor Program, attended the SGA meeting with several other DACA students and said she believes the resolution is a good first step.

“I believe it’s very important to bring it to the faculty that we want a safe campus, though it did not establish a pathway or set down solid policies that the students would like for the university to take,” Oñate said.

Oñate, a junior biology major, believes one policy the university should create is a “safety network” that would inform students when federal agencies are near campus.

“I would encourage a second resolution that would enact such policies and making them solid,” Oñate said.

Vanessa Tafolla, a junior organizational leadership major, said that more communication is needed between SGA and the DACA students they aim to represent.

“An ally is someone who stands next to and behind these people, and not in front of them,” Tafolla said. “One community feels that they have communicated, another community does not.”

Alexandra Navarro-Guzman, a sophomore international business major, said she understands the resolution’s intent but wants to know specifically how SGA will follow through to protect students.

“We’re at the point where we want answers, but they don’t have answers because there are no steps as to what’s going to happen next.”