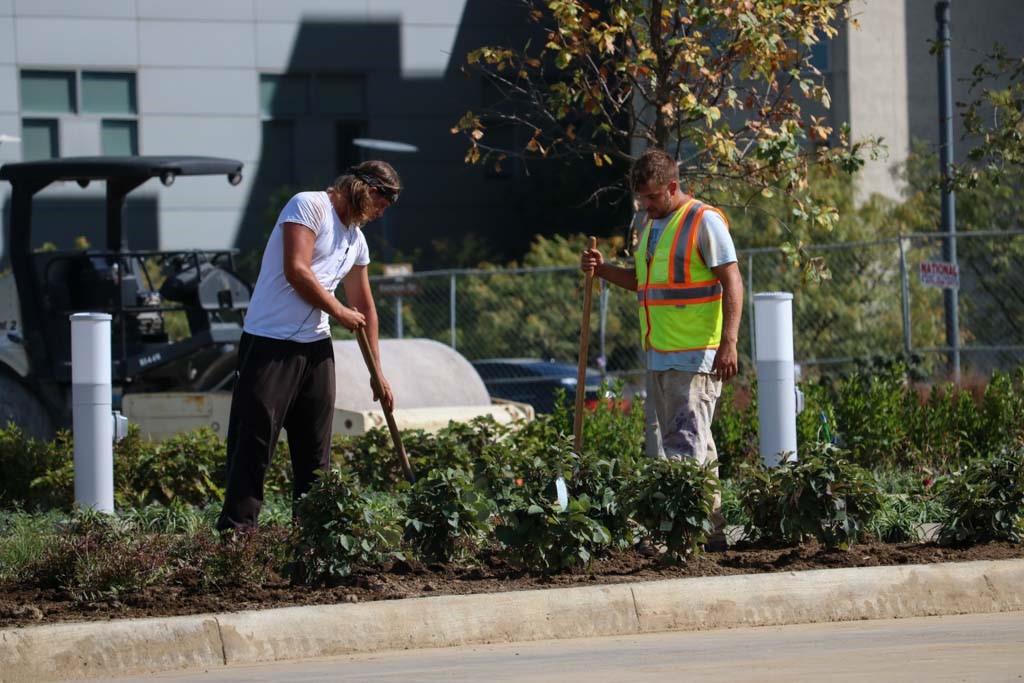 Construction workers planting trees that will one day be large by Lot K.

Work on the $2.95 million project is scheduled to be done by the end of this month.  When it is finished, there will be about 100 fewer parking spaces.

Some electrical work remains to be completed, as well as landscaping. Small shrubs and trees are being brought in and will be planted in newly created growing areas.  Mary Paula Schuh, Director of Campus and Space Planning, said that the new parking lot will be nothing like the old when the work is completed.

“The trees will improve the parking experience. What we had before was a thin layer of asphalt that was falling apart, and another part of the parking lot was 100 percent gravel.  It wasn’t a pleasant experience to park there.  If you name a deficiency in a parking lot, it had all of them,” Schuh said.

She added that there will be many benefits to the campus once the work is complete.

“This is going to be safer, it will be more inviting and more welcoming, it will present a better image of the university to prospective students and visitors while at the same time serving a necessary function, providing parking. We it as being an enhancement to the campus,” Schuh said.

Schuh said that when the connector road is complete, the entrance to lots K and L will be one of the first things visitors see when they visit the campus.

“When you pull in, you are going to see this great view of this future quad and the Health Innovation Center building under construction and you will understand architecturally what we were trying to do,” Schuh said. “We wanted to landscape the parking lot to give it a nice pedestrian quality, to make it feel like a part of the campus.”

Schuh also said that adding trees to the parking lot is being viewed as a multi-generational commitment.

NKU Project Director Brad Lehman is also enthusiastic about what benefits the completed project will bring to campus.

“The central walkway with the curving sidewalk is going to have a lot of plants, a lot of trees, some benches, some lights.  It’s essentially the new front door of campus coming from the connector road and that in itself really excites me. Once we get those plants in there, it’s going to drastically change the look. This one is going to be really nice.”

The project began in June and was originally scheduled to be finished before the fall semester began.  Lehman said he is grateful for the understanding that most drivers have shown as the project nears completion.

“Overall people seemed really patient and we appreciate that. Nobody was happy that it got delayed and it wasn’t open the first day of school, but there was no better option given the constraints we had,” he said.

One of those unhappy drivers is senior accounting major Nicole Cobb.

“I think it’s dumb. It’s good to have green space, it’s good for the environment and it looks nice,” Cobb said. “But it’s not worth it if we have all these parking issues and people struggling to find parking.”

Andy Meeks is Director of Business Operations for NKU, which includes planning and supervising parking availability and enforcement.

“The parking lot was in dire need of restoration. In a couple of weeks, they will be done and we are missing some parking spaces, but it hasn’t been a huge problem,” he said.

“Tuesday and Thursday it gets a little tight on campus for parking, but we never run out of parking spots. If you don’t come to campus until 10 or 11 o’clock, it’s likely, at least initially, that you will not be able to park on that side of campus,” Meeks said. “From about 8:30 on, the hot spots fill up because that’s where people want to park.  If your Tuesday/Thursday schedule doesn’t have you getting to campus before 9:30, you probably won’t be able to park over there.”

Other construction that will be completed in the area of Lot K include a ramp that connects the lot to the parking garage. That work is expected to be complete by the end of October. Schuh said that ramp work is part of the overall plan to eventually eliminate traffic on Kenton Drive.