#NKU4UVA: Vigil held at NKU in solidarity with victims of violence in Charlottesville 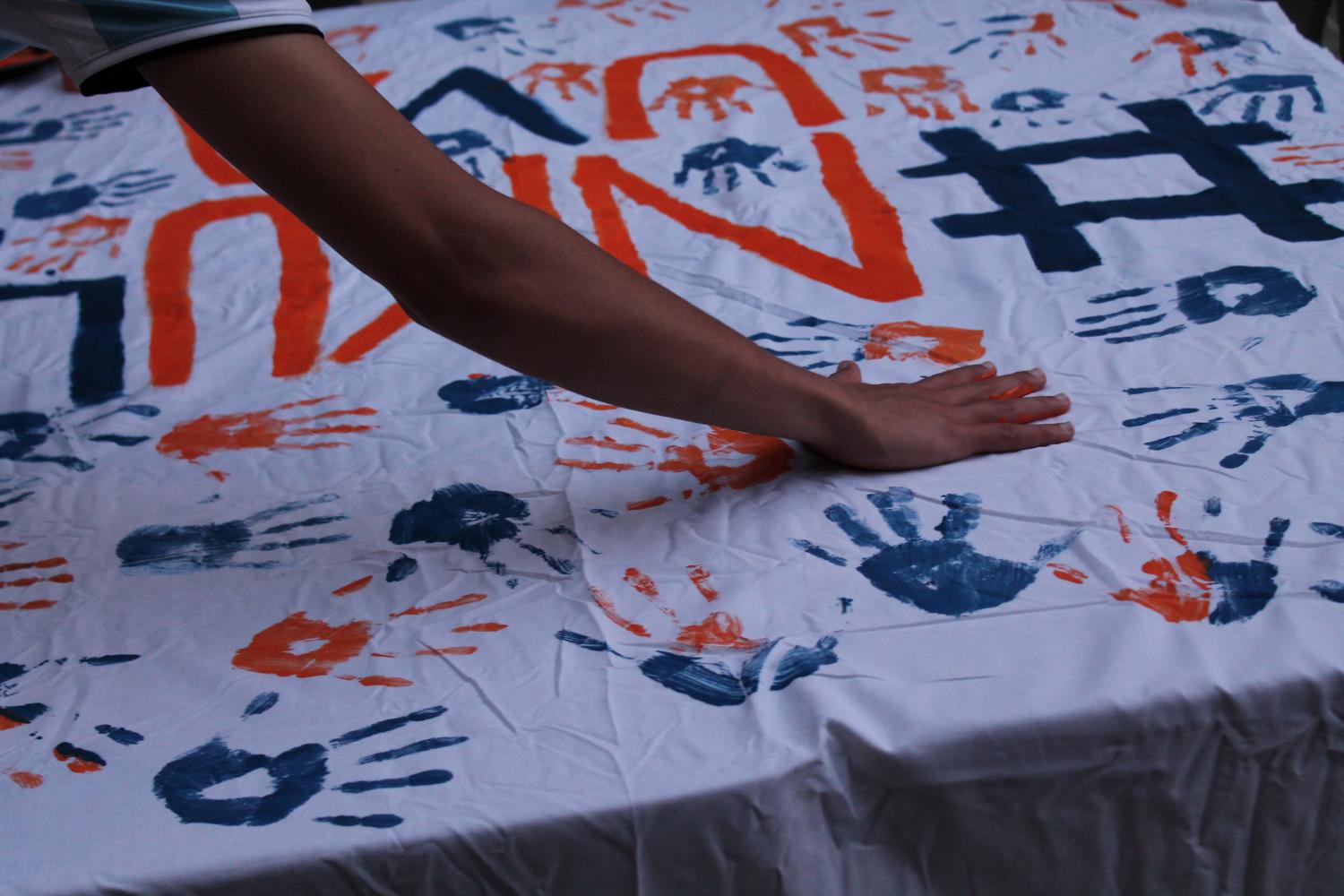 The banner will be sent to UVA in the coming weeks. After the vigil it was speckled with both hand prints and signatures.

In the aftermath of the white supremacist rally that took place in Charlottesville, Virginia, Northern Kentucky University’s Student Government Association held a vigil in solidarity with the victims, their families and University of Virginia students.

Over 50 students, administration, faculty and surrounding community members gathered in the Student Union plaza at 8:30 p.m. on Aug.14–some with electric candles cradled in their hands, others holding signs marked with words of unity and calls to action.

The vigil was pieced together swiftly, SGA president Sami Dada said. He wanted to do something impactful not only for NKU, but for college campuses across the nation as well.

“At the end of the day, love is what we’re here for. Love drives out hate,” Dada said.

Earlier, his name joined 180 student body presidents across the nation in signing a message of solidarity with the students of UVA.

It is beautiful to see the student body Presidents across America uniting together for a great cause. #SolidarityWithUVA pic.twitter.com/589wb0ISjB

On August 11, The Daily Progress reported that hundreds of white nationalists carrying torches gathered for a “Unite the Right” rally, in protest of the removal of Robert E. Lee statue, a Confederate general. In the thick of the march, a group of UVA students stood with a banner that read “VA Students Act Against White Supremacy.”  The rally was later declared an unlawful assembly when violence broke out.

The violence continued into the next day when a car drove into a group of counter-protestors and another car, killing Heather D. Heyer, a paralegal in VA, as New York Times reported. Two state troopers, LT. H Cullen and Tropper M. M. Bates, died after their helicopter crashed while monitoring the demonstration. In total, 34 have been reported as wounded from the clashes.

According to officials, James Alex Fields Jr., of Maumee, Ohio was the driver of the vehicle and will face charges, including a count of second-degree murder, three counts of malicious wounding and one count of hit and run with injury.

For Victor Rice, NKU student, this was partially the reason he came out–he says Fields went to the same school district, Boone County–as he did.

“It’s one of those things where ‘Hey, not everyone is like that around here,’” Rice said. “To show up, support and provide numbers and be like ‘Hey, yeah some people are assholes, but not everyone is an asshole.’”

Rice sat surrounded by his friends in a circle. Later, once the vigil began, they joined a larger semicircle. Each expressed that they wanted to show support and show love both to their own community and those affected by the events in Virginia.

‘Tonight is not about us’

Before the vigil began, attendees gathered around a white banner spread across a table, which will later be sent to UVA.  Hannah Edelen, Public Relations Chair for SGA, helped paint hands in strokes of orange and blue, the university’s school colors.

One by one, people placed their hands on the sheet, colors seeping into the fabric as a representation of their solidarity. Some held hands after–the wet paint acting as a symbol for unity and for love.

“Tonight is about these guys and what they went through. Our hands are here because I feel like when you hold hands with someone, that’s when you support them,” Edelen said. “That’s why we have our hands painted.”

As Rae Loftis, coordinator for LGBTQ Programs Services, painted her own hand she said she was proud of NKU students for planning the vigil, especially when race is a contentious issue.

As she removed her hands, leaving an imprint against the white backdrop of the banner, she said she came not only for NKU students, but to show up for UVA as a body that represents going against white supremacy, Nazi groups and other hate groups.

“I pride ourselves at NKU for being inclusive and for the policies and culture we have on campus; I’m not saying that it can’t happen here, because I don’t think any university is above it,” Loftis said, “but I think events like this help showcase what NKU really stands for and what our students really stand for.”

Mariah Jones, a sophomore English major,  said she was hesitant to attend at first because as a person of color it can be scary safety-wise to come to events. Despite this, she wanted to show her support and care by showing up.

Later in the evening, she came to a podium set directly under the Student Union entrance. Leaning into the mic, she recalled the moments after she found out about the violence in Charlottesville

But that night she recalled praying with her grandmother for resolution.

Members came to mic and silence filled the plaza. Snaps could be heard in agreeance with speakers, some were pulled into handshakes, hugs or whispers of support as they left the mic.

“We Shall Overcome” was performed, and slowly those who lent their voices to the gospel hymn compounded and stirred a sense of unity within the crowd.

But the night wasn’t only a call for healing; James Johnson, senior EMB major and Midwestern director of Alpha Phi Alpha, Inc., an African-American fraternity, asked the crowd to analyze why they were here.

“The reason we are here today is not because of some out of the blue experience. The reason we are here is that of a system, to be quite frank with you,” Johnson said. “We are here because evil has poked its nasty head out once again. Although it’s 2017, we must not fail to realize that we have a long way to go.”

He recounted a discussion he had with Dr. Everett Ward, general president of Alpha Phi Alpha, in which they navigated the question of how to attack evil.

“NKU is one. To be strong, we need to stick together,” Roberto Amazendes said. pic.twitter.com/MEt3PTJ3vC

The response, he said, doesn’t rely on the hundreds of African-Americans that are affected by systematic racism daily, but it rests in the hands of white America to challenge bigots and racists rather than stay silent.

“Personally, it takes this weekend–it takes events like Charlottesville to remind us that we have a lot of work to do.”

The president of NKU’s chapter of the National Association for the Advancement of Colored People, Brehonna Thompson said that their chapter stands with the victims of hate and ignorance in Charlottesville, VA.

“We will continue to advocate against hate, racism, and acts of terrorism committed on our college campuses and in surrounding communities,” she said. “In the words of our brothers and sisters across the nation, ‘Fear doesn’t live here and will never have a place here.’ Students, you have a strong support system, never be afraid to use it.”

‘Empathy is the key’

Interfaith minister Adam Zarnowski led a prayer and called for empathy for those who have different daily struggles. He asked the crowd to find love in their hearts for their neighbors.

Chanelle Jones, president of the Black Lawyers Association at Chase Law, was born in Virginia, raised in Atlanta and personally knowing family and friends in Charlottesville, the violence hit close to home.

“I’m sending love. I’m definitely sending a prayer. And I’m trying to send understanding,” Jones said. “When it hit me on Sunday, the first thing I did was asked God to forgive them; if I could forgive them, I could move forward in healing.”

Speakers asked attendees to remember to vote, to create love in their communities, to stand up for Hispanics, for African-Americans, LGBTQ individuals and to not let this moment be another Twitter trending topic. As the night ended in prayer, several attendees embraced one another. Some wandered to the banner and signed their names. Electric candles still carefully placed in palms.

“I hope that people take a moment to stop and think about the struggles that–I think we as white people, and I hate to say we as white people, but we don’t face the same struggles our African-American brothers and sisters face on a systematic level,” Edelen said. “I think it’s important to sit back and think, ‘I have struggles, but their struggles are different than mine.’

She added that she hopes the event reached everyone on a spiritual level. Treyanna Barnes, an NKU sophomore wearing an NKUnity shirt came up to embrace Edelen, who earlier noted that Barnes gave her a reality check of the struggles and pain people face because of the color of their skin.

Barnes said it was hard to come out and remain calm, but came because the people hurt in Charlottesville were her people.

“I hope that they take back that it doesn’t stop here. This wasn’t a random act of hate,” Barnes said. “This was something that’s always been there but provided an opportunity to speak out about it. I hope people understand that the responsibility isn’t on African-Americans, but on our counterparts.”

She added that this could happen anywhere. As attendees left, chatter filtering into the atmosphere of what had been a solemn night, she said those same people who brought violence to Virginia are in our communities as well.