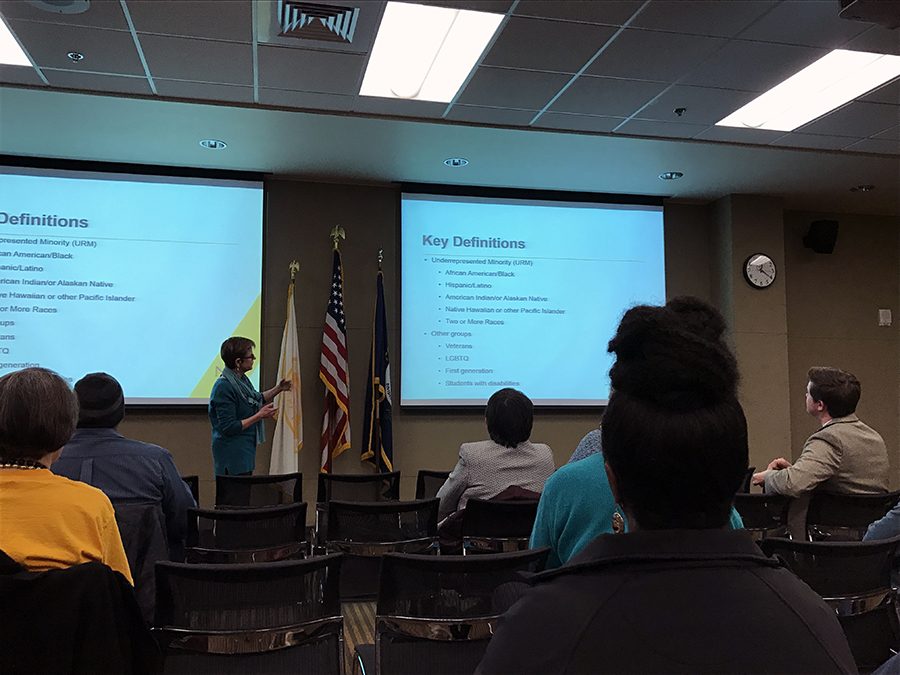 Kathleen Roberts, senior advisor for Inclusive Excellence, led the forum which was split into two parts.

During the first part of the forum Roberts went over the Inclusive Excellence timeline, the planning process and vetting schedule.

People from all university disciplines were present, but Roberts did make note of a lack of students, with only a couple in attendance.

Roberts highlighted the plan’s three main goals. The first goal of the plan was to increase enrollment and graduation rate among under represented minorities and low income students.

Goal two for the Inclusive Excellence Plan is to attract and develop a diverse workforce.

The final goal was to focus on campus climate, ensuring an inclusive campus environment.

After Roberts explained to the audience the plan for the Inclusive Excellence draft moving forward, the second part of the forum began.

The audience was split into five different groups with each group going to a table for a branch of the Inclusive Excellence program.

In these groups the participants went over the 2022 Inclusive Excellence Plan drafts and were encouraged to discuss the plan and give suggestions.

Francoise Knox-Kazimierczuk, assistant professor, Health Science Department of Allied Health, said that students should care and be participating in the Inclusive Excellence forums.

“This is about their campus, your university, how do you envision your campus looking over the course of your time here and also into your future because you’re still connected to the university,” Knox-Kazimierczuk said.

The Inclusive Excellence Plan is important because it helps set students up for the “global society” we live in, according to Knox-Kazimierczuk.

Rachel Green, director of employee relations, and Tracey Honeycutt Sigler, Department of Management, shared Knox-Kazimierczuk’s views that students should care about what happens with the Inclusive Excellence Plan.

“We want to create a culture on campus where everyone feels accepted and valued and this plan is helping NKU to help them,” Green said. “Help us help you students by looking at our plan.”

While there may not have been many students to voice their opinions at the forum Green and Sigler noted that student input was used and considered when making the draft.

Suggestions and questions were written down on post-it notes and stuck on a board at each station. After about 10 minutes the time was up and the groups would rotate to a different branch of Inclusive Excellence to repeat the same exercise.

Tracy said the plan affects more than just current students, but also those who are considering coming to NKU in the future.

“When you’re a student you want to come into an accepting culture,” Sigler said. “You want to select a school that has a strong plan and then ultimately it does affect the students.”