Timeline: Students gather on campus to watch the game 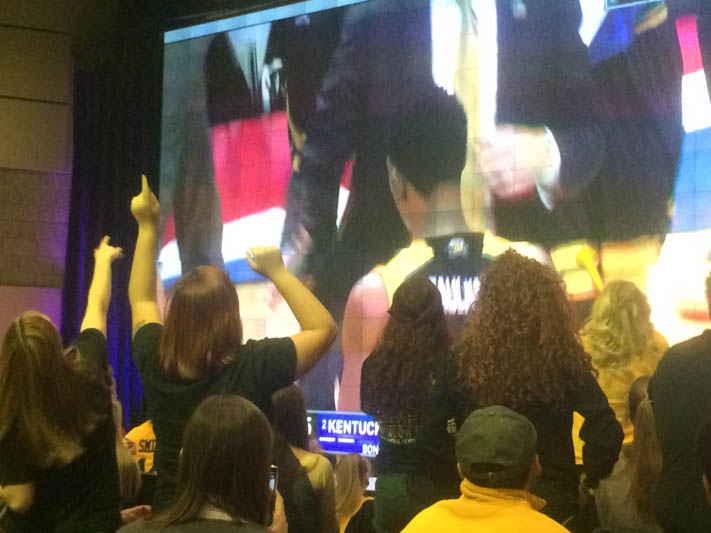 Students continue to cheer for their Norse as the game ends

All over Northern Kentucky, students and fans gathered to see which team would advance to the second round of the NCAA tournament. Watch parties were held in breweries and restaurants alike, with no watch parties for campus-bound and under-aged students.

Activities Programming Board, Student Government Association, and Association of Campus Residents all decided to collaborate to provide a fun and safe environment for students to watch the game and cheer on the Norse.

According to Jessica Thames, Marketing Coordinator for University Housing, the idea for a campus watch party came from SGA and then other organizations wanted to join in and help sponsor the event.

“This event brings a lot of spirit and a lot of pride to our campus,” said Thames. “Being the first year that we were eligible to go to the NCAA Tournament and making it is huge for our university.”

Students began to show up for the watch party at 9 p.m. and one of those students was Emily Newell, a sophomore at NKU.

“I was really excited about it because I didn’t have anywhere to watch the game, especially not being 21. I didn’t 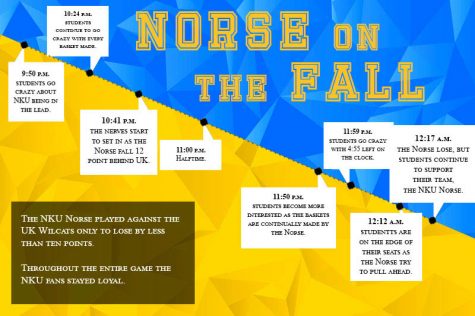 really want to go to a bar, “ said Newell. “But it’s super cool because it’s like having our own student section in our digitorum, which is amazing in general. But it’s just really cool to see all of us here, who didn’t get to go to the game.”

Newell attended the watch party with some friends who are Resident Assistants and were there to support the program and cheer on the Norse.

Lauren Mountain, Hall Director for Northern Terrace, was there with NKU Housing as they provided free pizza and free NKU merchandise to attending students.

“SGA, ACR, and APB started talking about the upcoming basketball game, thinking about how we can get our students to attend,” said Mountain. “They noticed that most of the watch parties were happening at bars, and they (the organizations) wanted something on campus for students.”

While planning the event, the organizations looked at what they had to give to students and they already had water bottles, phone accessories, shirts, chapsticks, and pillowcases to give out before the game started.

When the game between then NKU Norse and UK Wildcats began, Norse fans cheered with excitement as the Norse were in the lead, and also as their season came to a close.