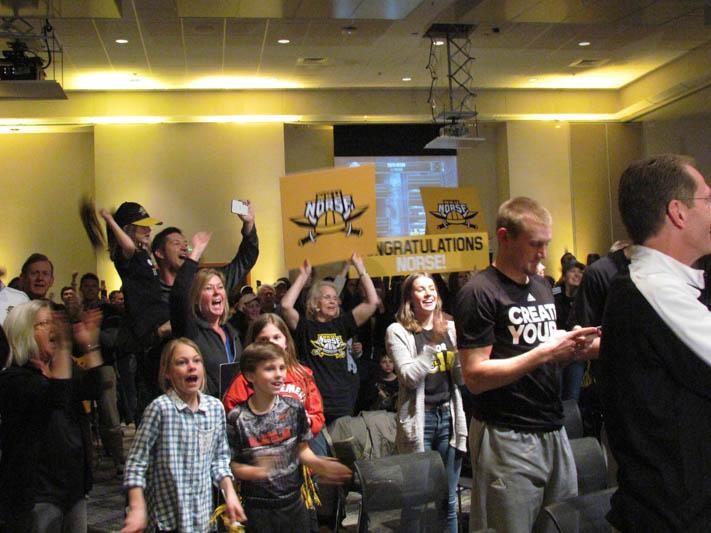 Norse fans cheers as they learn the Norse will play UK in the NCAA Tournament. Around 800 people showed up for the selection show party

Nearly 800 Northern Kentucky fans packed the Student Union Ballroom Sunday to join the men’s basketball team to celebrate the Horizon League championship and to discover who the Norse would play this week in the NCAA tournament.

According to Bryan McEldowney, assistant athletic director for communications and media services, fans began arriving as early as 3:30 to ensure a seat inside the ballroom. By 4:15, the line of people extended around the Student Union, so doors were opened early.

As broadcasters announced on national television that NKU would be playing the University of Kentucky for their first game in the NCAA Tournament, the entire room threw their arms in the air and cheered.

An event packed full of not only students, but alumni, parents, faculty and staff, President Geoffrey Mearns said this was just another example of something special happening at NKU.

Roger Auge, NKU Alumni, was also passionate about Sunday’s event as he described it being “Terrific, fantastic, wonderful.”

Mearns and Auge both agree that a major component to this year’s success is the determination of the team members.

Auge believes you can truly tell that the team members want to win by looking into their eyes.

“One of the best things about the team is, they’re nice guys,” Auge said. “They’re intelligent guys. They are competitive … they want to win.”

“I think we’ll do really well. We’ve got a lot of potential,” Danos said. “The thing that makes us great is our chemistry and our will to do a job for each other.”

Looking to the future, Danos hopes to win a few games in the tournament.

“That’s something we definitely want and need,” Danos said. We’ve got a lot of good guys; we’re coached well. So UK’s a great matchup for us; it’s definitely something to look forward to.”

Despite UK being a tough competitor, Auge said the fact that NKU has come this far is a victory in itself.

“Honestly, that they have come to the NCAA Tournament with this kind of a coach, with players like this, in an atmosphere we have today, the rest of it is icing on the cake,” Auge said. “Let’s say they lose to Kentucky. In reality, Northern Kentucky University has won its own kind of championship.”

Amanda Steier, senior and double major in Public Relations and Musical Theater, is apprehensive about NKU playing UK because of UK’s experience competing in the NCAA Tournament. Still, Steier agrees that it’s important NKU has made it past the Horizon League.

“When I saw it was UK I was kind of like, ‘Oh no,’” Steier said. “Obviously UK’s had a lot of wins. They won the NCAA Tournament numerous times so it’s like a walk in the park for them. So I’m just hoping that we can at least play a good game against them and show that we have the strength to go that far.”

With so many UK fans attending Northern Kentucky University, some students are left wondering who to root for.

Steier and Alayna Hatcher, sophomore and psychology major, said they are both cheering for NKU.

“I’m a sophomore so I went to games last year as a freshman, and there were some people there but not a lot of students,” Hatcher said. “This year, I think it was a lot better with people coming to games. So next year I’m hoping that we’ll get a full stadium and sell out all our tickets.”

Mearns said he is glad the game is in Indianapolis, because it provides that opportunity for the NKU community to show support.

“Well, certainly they’ve got a tough first round match against the University of Kentucky but it’s a match, as you can tell, that they wanted,” Mearns said. “With the game being in Indianapolis, our students, our fans, our alumni can all get to that game and give our team the support that they deserve.

“We’ve got one of the youngest teams in the country. So this is our first trip to the NCAA, but I don’t think it’s going to be the last one.”