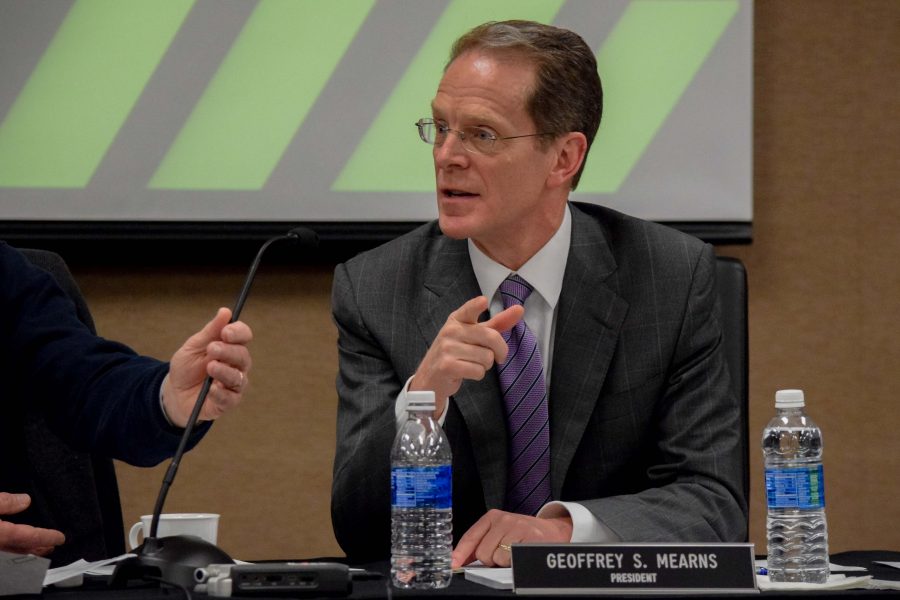 NKU President Geoffrey Mearns during Tuesday's Board of Regents meeting.

HIGHLAND HEIGHTS, Ky. — President Geoffrey Mearns will leave Northern Kentucky University after spring commencement on May 7. An interim president is expected to be named before May, according to a letter sent Tuesday from Board of Regents Chair Rich Boehne.

The email said that the Board of Regents is already looking towards soliciting search firms to choose the next president and that the proposals will begin within the next few days.

Regent Norm Desmarais, who joined the Board of Regents last June, will chair the search committee. Previously, Desmarais was the chairman and founding partner of the Covington-based tech firm Tier1 Performance Solutions, according to the email. His two daughters and wife are also graduates of NKU.

RELATED: Chair of Board of Regents reflects on NKU’s future

“[Demarais] will be in touch soon with faculty, staff, students, and members of our community as we build out the search committee,” Boehne said in the email.  “This is important work, and also time-consuming. I hope those of you asked to participate will be willing and eager to help select the next president of our outstanding university.”

The news follows the announcement of his decision to leave for Ball State University on Jan. 24.  The NKU community learned of his departure with little warning. Rich Boehne, Chair of Board of Regents said that he knew of Mearns’ departure a week prior to the event.

According to our previous coverage, Mearns’ contract was set to expire on July 31. After the initial shock of the announcement, Mearns’ sent an email to the NKU community, stating that the decision was not an easy one to make.

The board is looking towards the NKU community as a whole for their input as they look toward choosing the upcoming president. According to the email, a schedule of open forms both on and off campus will be released shortly, in order to receive feedback.

The committee will also factor in the results from the recent presidential assessment.

“This period of information gathering is one of the most critical phases of the search,” Boehne said in the email. “Transitions, although stressful, provide an opportunity to recalibrate and consider what traits and experiences are most critical for our next president.”

Below is what Boehne called an “aggressive” schedule that outlines the search process, which should conclude early in the fall semester.

This is a developing story, and The Northerner will update as information becomes available.