Steak ‘n Shake a success: What restaurant will be next? 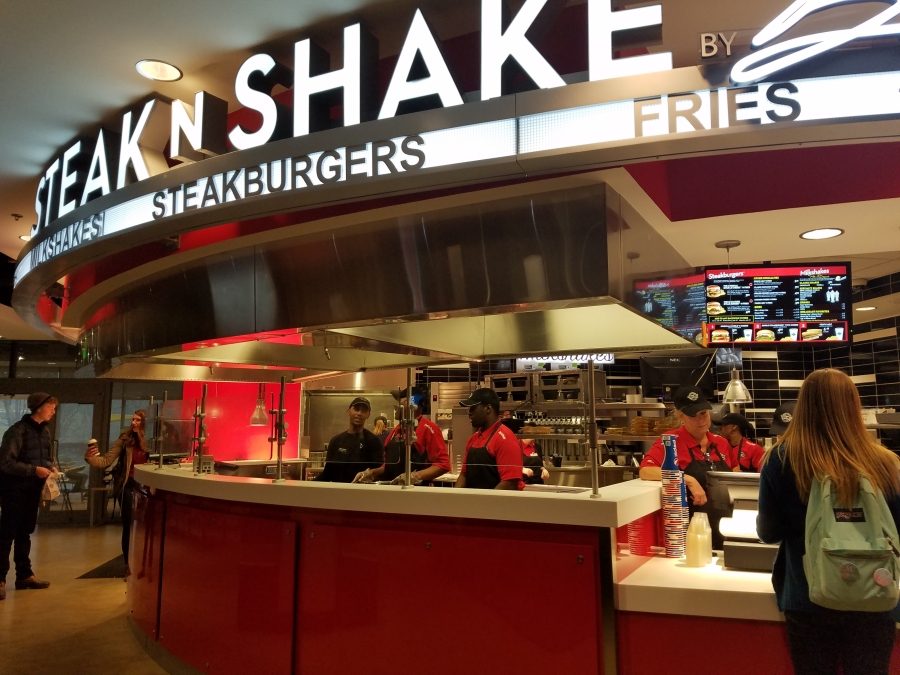 NKU's Steak 'n Shake is now open for business in the Student Union.

Students waited in line for nearly 30 minutes on Monday to try out the new Steak ‘n Shake, which replaced Coyote Jack’s in the Student Union.

The on-campus Steak ‘n Shake features a smaller menu than the full restaurant, but still holds about 10 food items and 10 shakes.

While the majority of students were excited about the food court’s newest arrival, some said they were concerned the restaurant wouldn’t have options for vegetarians.

But the NKU Steak ‘n Shake carries breakfast items as well as a vegetarian option; the portobello mushroom sandwich. The veggie burger formerly served at Coyote Jack’s is still available at The Strip (along with sweet potato fries).

Andy Meeks, director of business operations and auxiliary services, said the plan to bring a national brand to campus started two years ago, and originally, Chick-fil-A and Panda Express were up against Steak ‘n Shake to fill the spot.

Meeks said Chick-fil-A was the number one choice for the spot at first, but after some “image problems” and discussions with various student groups, Steak ‘n Shake won the vote in the end.

“Panda Express was in the mix but they finished a distant second,” Meeks said.

Meeks said Chick-fil-A and Panda Express can’t necessarily be counted out yet.

With Steak ‘n Shake complete, he said they will start the process of bringing another national restaurant to campus at the end of this year.

“Food service, just like everything else, is cyclical and we’ve actually gone through a couple cycles where national brands in food courts were hot, then they were not so hot, and now they’re hot again because they’re sort of this new category, new level of these things,” Meeks said.

The construction cost of the new restaurant was $450,000, according to Meeks.

The restaurant has been a success in its first week, according to Meeks a;while he expects it to slow to some degree, he believes it will do well long-term.

Elementary education major Brookelyn Siebert said she has been to the Steak ‘n Shake a handful of times in its opening week.

“I ate Coyote Jack’s maybe once a week or every other week, and I’ve been to Steak ‘n Shake three times, so I think I like this more,” Siebert said.

Though it was towards the end of the first week, Grevenkamp said the line had stayed packed every day he’d seen it.