From student to chief: Gaffin to lead NKU police 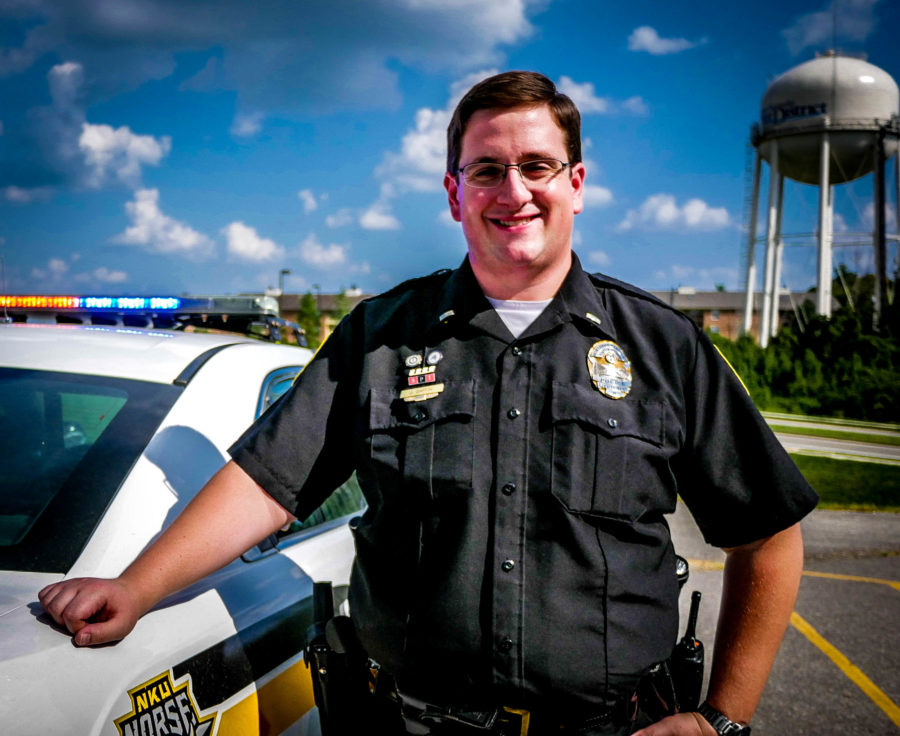 Once an undergraduate student, Gaffin was named the full-time chief of NKU police Monday morning.

“It’s about the relationships that I’ve had here,” Gaffin said. “That didn’t begin as an officer here, that began the day that I stepped on campus as a student. It’s neat to be able to leverage all of those experiences and to bring my experience as an undergrad here.

“I feel like it gives you a little bit credibility sometimes with the students here, that you can understand where they’re coming from.”

Gaffin had been serving as interim police chief since the end of July when former Chief Les Kachurek resigned from the post. Gaffin will assume the permanent position Jan. 3, 2017.

“It’s a relief in some ways that the process has concluded,” Gaffin said. “Certainly the outcome that I wanted. I think there’s a lot we can do here at the university and a lot that we can build upon. I’m eager to get started.”

Monday’s announcement brings to an end a period of time where Gaffin was serving both as interim chief and continuing his regular duties.

“There’s not someone to back-fill your job, your responsibility,” Gaffin said. “Those jobs don’t always directly align with each other. It’s a balancing act to make sure you’re doing both jobs well enough. It will be nice to get back to full strength and ultimately fill my position and build on that and move forward.”

In addition, Gaffin had the uncertainty of making departmental decisions that might be overturned by the next police chief.

“The interim role is always one that’s challenging because you’re in that position and you’re making those decisions,” Gaffin said. “But there is always the question of what’s going to happen permanently. Who is going to be in the position permanently?”

It turns out the next police chief will be Gaffin himself. While some things may change, Gaffin said some things will remain the same.

“I don’t know that my philosophy is going to change a whole lot,” Gaffin said. “I’ve always tried to be an authentic and genuine person. You’re not going to see a totally different me on day one.”

Dan Nadler, vice president of student affairs, made the announcement in a campus-wide email to faculty and staff.

“Many of you already know John,” Nadler said in the email. “He is an NKU alumnus who has spent 10 years with the NKU police department. During that time he has implemented and led numerous initiatives, including a field training program and oversight of safety and emergency management.”

Nadler said in the email that the selection of Gaffin was the culmination of a nationwide search.

“I am confident that John is the right person for the job,” Nadler said. “He also brings a strong vision for how to elevate NKUPD and build relationships within the department and across campus.”

Gaffin holds a master of science in justice administration degree from the University of Louisville and a bachelor of arts in political science with a minor in criminal justice from Northern Kentucky University.

According to Nadler’s email, Gaffin will oversee a department that includes 18 sworn officers, a K-9 unit and seven civilian employees.

The way Gaffin has engaged with students and built relationships is something he felt was a strong attribute during the selection process.

One of the positives of the interim position was a chance to see how a potential promotion would fit into his family life.

“From a family perspective, it’s something my wife and I talked about a lot and discussed the impact,” Gaffin said. “We both thought it was an awesome opportunity — we’re both alums. It’s particularly exciting to be able to serve your alma mater in that fashion. It was such a great opportunity, neither one of us felt that it was something that any negatives attached to it.”

Gaffin stressed that he wants students to reach out and have conversations with his officers. While he doesn’t want people calling dispatch simply to say hello, he hopes there will continue to be a strong dialogue.

“Always remember that we are their police department,” Gaffin said. “That’s why we’re here. We’re here to serve. Never hesitate to reach out. If you see us out and about, stop us, say hi, talk to us. We’ll be more than happy to engage with you, and you’ll come to find out we’re a lot like anybody else here on campus. We’re just regular people.”