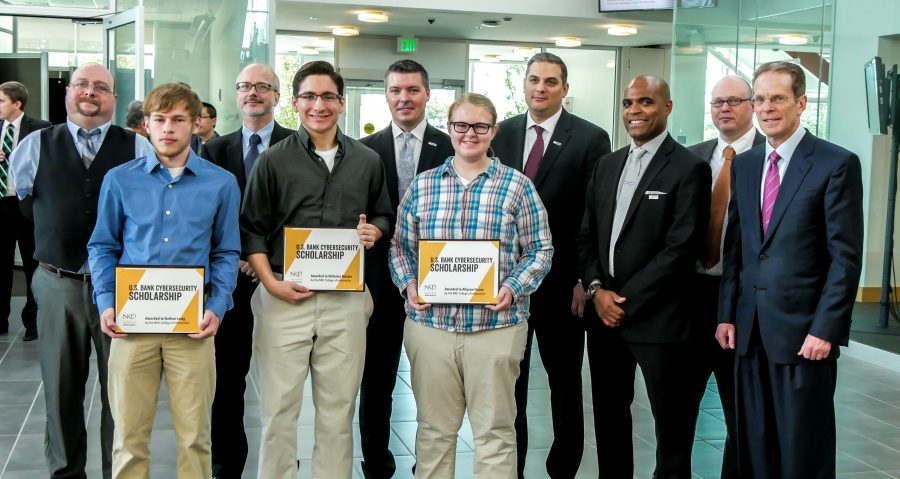 NKU students Nathanael Long and Nick Mester and Allyson Frame (front) received cybersecurity scholarships as part of a partnership between US Bank and NKU.

When describing the scope of his position at US Bank, Jason Witty sounded more like a meteorologist than a bank executive.

“We have to think in terms of the chief information security officer being like a weather predictor,” Witty said. “I’m trying to forecast what’s going to happen next. At the same time, I’m doing that on a planet where there’s a new type of weather every quarter, and none of the old types of weather ever goes away.”

Allyson Frame, Nathanael Long and Nick Mester were the first three beneficiaries of the new scholarship partnership between the Minneapolis-based bank and Northern Kentucky University.

Witty said the strength of NKU’s certified cyber security program was one of the factors involved in the decision to partner with the university.

“There is certainly a dearth of talent in cybersecurity, so we’re always looking for how are we going to handle that now, 30 days from now, a year from now and 10 years from now,” Witty said. “Ensuring there was a certified program was key from our perspective, but also that there’s a really good and talented student body.

“Between those two characteristics, it really thrust NKU to the forefront of our thought process, especially given our security operations center and cyber fusion centers happened to be located in Cincinnati as well.”

“I was a freshman here at NKU, and I saw a Blackboard message that said there was a cybersecurity intro meeting,” Frame said. “They were giving a talk and explaining what they do. I thought, ‘This is really cool! I don’t know anything about it, but I want to learn.’ It’s just taken off from there.”

Receiving the cybersecurity scholarship will allow Frame to continue pursuing a career in either middleware, software that acts as a bridge between operating systems and applications, or web administration.

“The scholarship confirms that I’m on the right path with my career and my education,” Frame said. “It makes me kind of excited to get out to the workforce and do the security stuff that I really want to do.”

Long, a sophomore CIT major, is still waiting to take his first security course. However, he was a member of the cyber defense team, which he said is his main outlet for learning about information security.

“It’s pretty laid back, but it’s pretty official,” Long said. “There are competitions that we participate in, including the cyber defense competition, which includes defending a network from hackers and completing objectives while competing against other teams.”

The thought of having a daily battle with hackers is something that Long admits can be intimidating.

“It’s a little daunting, thinking what you could be going against,” Long said. “At the same time, it gives you something to work towards. You’ll never be out of a job in cybersecurity.”

Mester, a senior CIT major, is graduating at the end of the semester. He said he had just returned from one job interview, and would be heading off to another after Wednesday’s press conference.

He admits it’s a different world outside the walls of Northern Kentucky University.

“When you walk outside of your classes, you realize you learned all the foundation and you don’t know anything about the current world,” Mester said. “I got a taste for what you need to do in the day-to-day aspect of security which is really important.”

Working with computers seemed natural for Mester, who liked building computers and breaking computers as a child. He is excited about the challenges awaiting him after graduation.

“I find it exciting,” Mester said. “It’s like walking out into a world where you know everything is hostile, but it’s my job to secure that and make sure the company I work for understands I’m there to make sure they’re safe and they can do their day-to-day activities without worrying about it.”

He credits the cybersecurity team for getting him to the point where he is ready to tackle real-world challenges.

“To put it simply, I wouldn’t be here if it wasn’t for this program,” Mester said. “I learned way more through the cybersecurity team than I had in classes in terms of security. I highly recommend this team to anyone who is interested in security.”

There will be plenty of job opportunities for those who graduate from NKU in the cybersecurity field, according to Witty.